A note on Blanco pointing

The telescope's pointing is refined via a pointing map in which we periodically scan the telescope over the whole sky and measure the offset between where the telescope thinks it's pointing and what we see with DECam. This map of offsets is interpolated and applied to the telescope pointing on each subsequent pointing. Of course, there is always noise present and the map will tend to drift slightly over time (not least because, for example, the telescope "breaths" with temperature variations). As a result, long range slews will tend to have larger errors than short range slews.

Typically, watching the same field all night, the Blanco's pointing accuracy is good to 10-20", maybe 5" rms on a good night, relative to your starting zero point. This accuracy will tend to drift during the night and we recommend that those who really care about that accuracy reset their zero point every now and then and especially after a long slew.

The two charts below show the run pointing and offsets during a typical night. Note an overall ~20" smooth variation with a few arcsec of noise superimposed, plus a large excursion just before 05:00. That large excursion was associated with a change in field, but two additional, indeed larger, such changes later in the night showed no such large excursion in offsets. Which slews will generate large offsets is not trivial to predict.

Note that the pointing map is made down to within ~30 degrees of the horizon. Above this altitude, corrections are interpolated, below this altitude they are extrapolated from the lowest edge of the map and are concomittantly uncertain.

With DECam, resetting the zero point requires an exposure of a few seconds, analysis using the Kentools "center" command, and instructing the operator to input the new offsets, and repoint. This whole exercise will take a couple of minutes. The result will not be perfect. 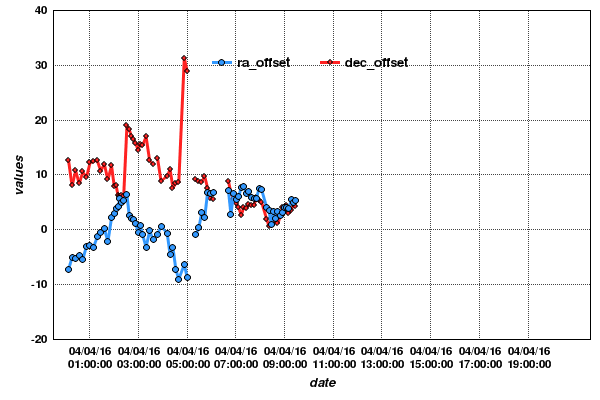 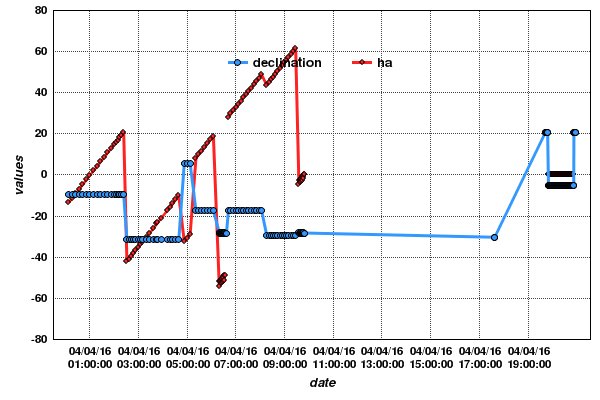