The Hydra spectrograph and positioner have had a history of problems since its commissioning. In the months July-September 2001, good progress was made towards fixing the worst problems. Below are summaries of the problems we have encountered and the work done to fix them.

The problems with the positioner resulted in the loss of often several hours per night.

Many thanks to Sam Barden, Phil Massey, Dave Sawyer, and Bezhad Aredeshi for their advice on fixing Hydra's troubles.

Our top priority for Hydra before the October 2001 observing block was to reduce the failure rate of the gripper. Many of the problems experienced in previous runs, listed above, have now been fixed:

However, with the appearance of another problem with the gripper (#3), it became clear that a complete overhaul of the gripper was necessary. Andres Montane (hardware) and Rolando Cantarruti (software) jointly took on this work, with Ricardo Venegas supporting. 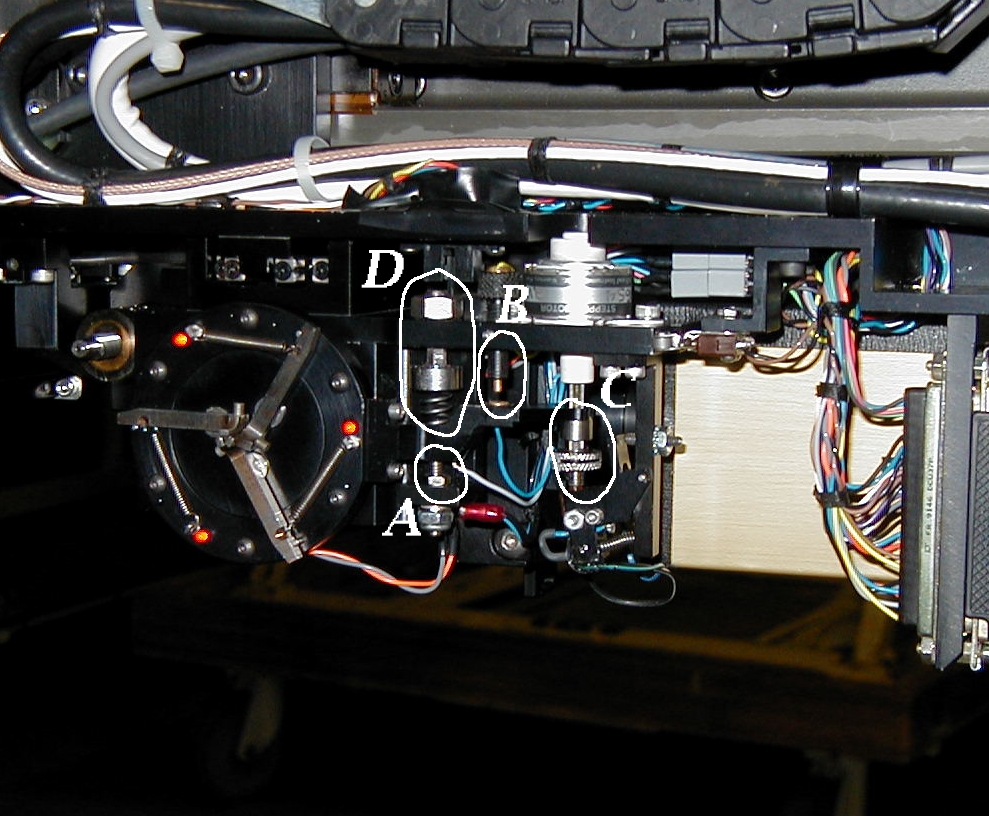 In order to uncover the cause of the gripper troubles, Andres & Co. needed to understand how the gripper behaves during the sequence of picking up a button, moving it, and putting it back onto the plate. What is supposed to happen? From Sam Barden:

The gripper thus cycles through three states while placing a button: open, closed, and relaxed. (A fourth state, "open wide", is also available, but is used mainly when the gripper is initialized). How does the gripper achieve these states? In Fig. 1 above, the three teeth of the gripper are mounted on the black wheel with red LEDs attached. When this wheel rotates, the teeth tilt about their mounting pins and the jaw opens or closes. The motor which provides the power to rotate the wheel is located immediately above the label "C". "A"-"D" indicate four mechanical switches. From our observations of the gripper in April 2001 and conversation with Sam Barden, we established that:

Andres&Co. independently established these functions of the switches. Their real insight, however, came from Andres' understanding of the mechanics of the system. Andres first observed that the turning of the gripper motor compresses the spring in switch C and opens the gripper. The closing of the gripper is then entirely driven by the stored tension in the spring. Second, given the distance by which the teeth are supposed to move in order to reach the open position, Andres calculated the distance through which the motor needs to turn. He found that the motor was stopping before it reached the full open position, held back by excessive force from the spring and by a spring in switch B. After he adjusted the positions of switches B and C, the gripper was able to complete the opening of the jaws. (Incidentally, Rolando discovered that the setting of switch B is never used in the software control, so that it actually serves no purpose). Third, Andres noted that when closing the gripper with a button in the jaw, the teeth continued to rotate even after they were fully closed around the gripper. By tuning switch A, he was able to stop the closing of the jaw before the teeth imparted rotation to the button.

Andes will refine the process of tuning the gripper before the next Hydra block.