The night of January 19, at approximately 1030 PM local time, a strong earthquake occurred south of Coquimbo. At magnitude 6.7, this was significantly weaker than the September 2015 event that also affected SOAR, but due to its proximity the intensity in the La Serena/Coquimbo area and on the mountain was comparable. (Our accelerometers were off-line, but data from LSST show very similar g-forces.)

Sunday, January 20, an emergency crew went to the site, after road access was cleared, to initiate the recovery process. Although progress was made, the evidence of strong accelerations led us to conclude the operation could not resume without inspection of the secondary mirror.

The picture below shows one corner of the boomlift installed on the observing floor; the marks indicate how much the 2015 event and this one have shifted it. The assembly weighs approximately 6 tons. 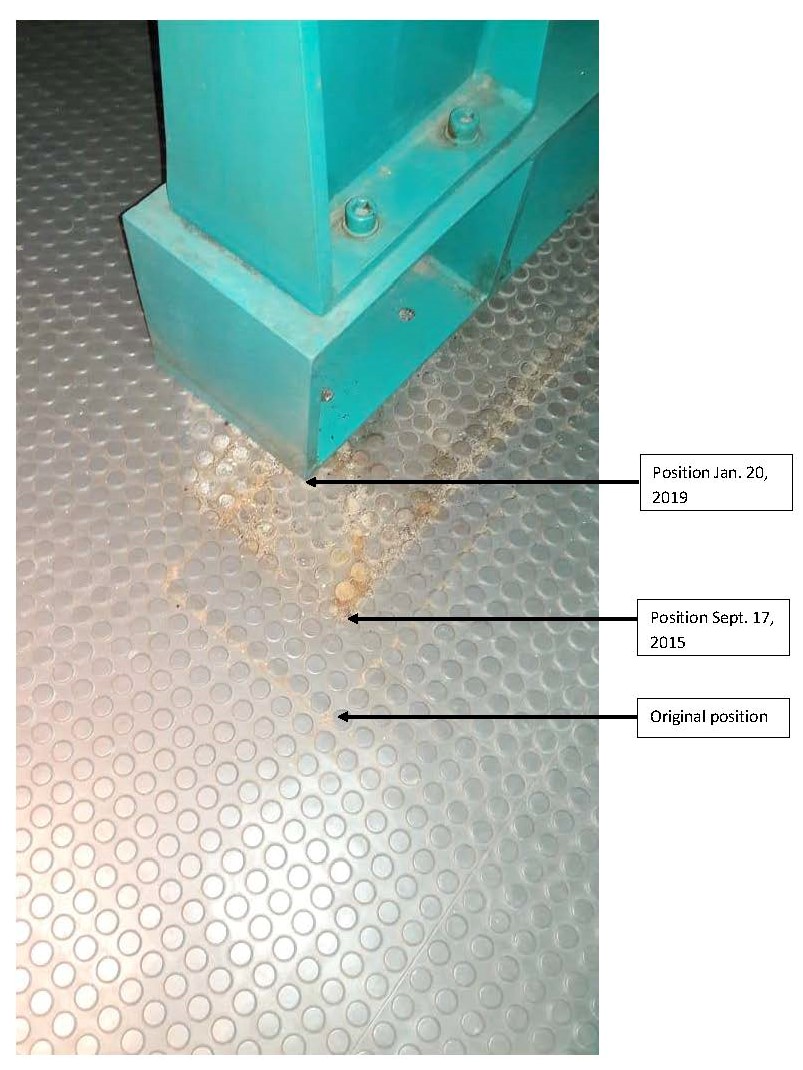 The movement after each event was approximately 15 cm.

Monday, January 21, the secondary was inspected, removing baffles and shields as required, and found to be OK. However, a complete inspection of the elevation axis and encoders revealed a displacement of the disk with the encoder tape relative to the encoder heads of approximately 2 mm on the IR Nasmyth side, and somewhat less on the optical Nasmyth.

The next day it was confirmed that the entire elevation structure had shifted where it is bolted to the yoke, as indicated by marks in the painted surfaces. There is no apparent damage to the elevation axis itself. Preliminary analysis indicates that, even with the shift, the telescope can be operated safely, once the encoders are re-aligned. 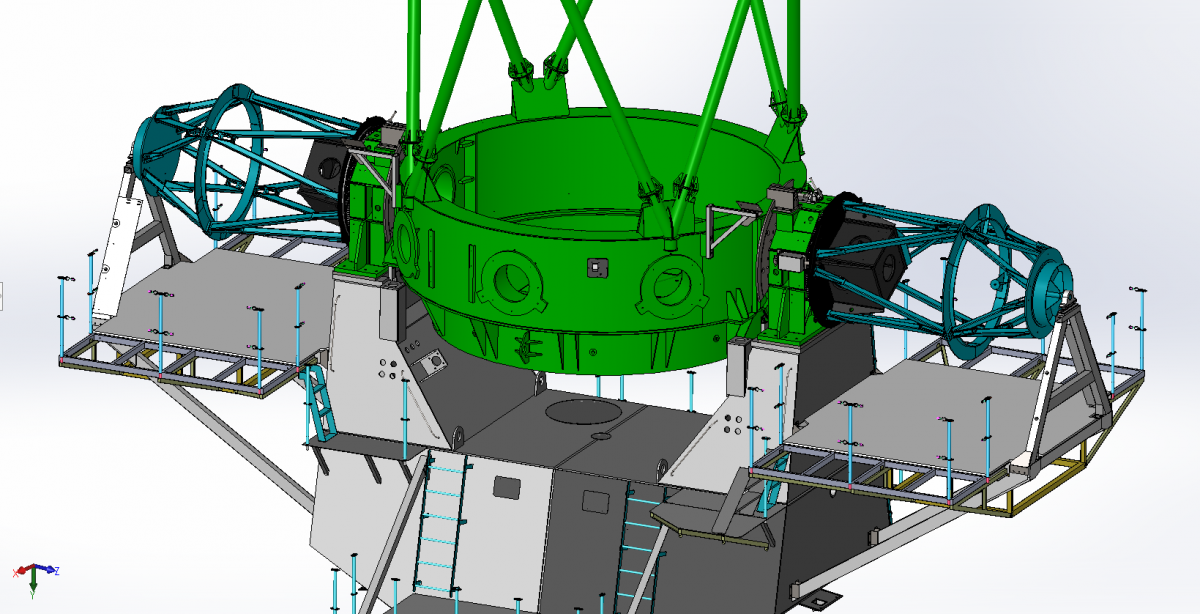 The figure above shows where the displacement occurred - the part in green is what shifted relative to the yoke (Figure courtesy of José Piracés).

Once it was clear what had happened, the crew worked on re-aligning the encoders and recalibrating them. This also included bringing back various sub-systems on the telescope (M2, calibration wavefront sensor). This work was completed January 25, so we are attempted to resume normal operations. Observations over the weekend of the 26th showed that the encoders were not as reliable as expected, so work continued on re-alignment on both axies (azimuth and elevation). On-sky testing was complicated by several nights of high humidity that prevented observing.

We were able to restore functionality for science on the following weekend, though with less than the full set of redundant encoder heads. There is some loss of pointing accuracy and slew speed, but in general observing efficiency is similar to its prior state.

Initial checkout has been completed for the Goodman spectrograph, including borrowing a filter from CTIO to replace an order-sorter that broke. Other instruments have been inspected, and full check-out is proceeding prior to scheduled observing.

Our prompt recovery from this serious event was due to the hard work of the SOAR staff and supporting ETS engineers:

More work is needed to fully recover the encoder systems and complete instrument checkout. The experience has also made it clear that additional seismic counter-measures are needed. Progress reports will be posted when appropriate as new articles and not as updates to this article.