Read more about NOIRLab's instruments and other capabilities in the Capabilities brochure.

The SOAR Adaptive Module (SAM) is a laser-assisted adaptive optics system at the 4.1-m SOAR telescope. By compensating selectively low-altitude turbulence sensed by a UV laser guide-star, it improves resolution at visible wavelengths. The sky coverage is nearly full.  SAM contains a 4Kx4K CCD imager covering the 3-arcmin square field and can feed light to a small visitor instrument attached to its port (Tokovinin et al. 2016).

Advantages offered by SAM. It  can reach exceptionally good resolution of 0.3" or 0.4" (if the atmospheric conditions allow it) at visible and near-infrared wavelengths in a 3-arcminute field, as though the 4-m SOAR telescope was lifted halfway into space (see SAM performance). SAM is ideally suited for imaging deep-space faint targets (or narrow-band imaging) where the 4-m aperture matters. It has complete sky coverage. Compared to SOI, SAM has no gaps between CCDs and does not need mosaicing to get the continuous image. Its guiders are more sensitive than the standard SOAR guiders. SAM can be also used in open loop, without laser.

Limitations of SAM. UV light is not transmitted to the science imager, so SAM is "blind" in the U band. The correction in the B band is not so good, while the sky background in B is contaminated by the faint UV leakage of the B-filter. The SAM imager has a distortion that might affect image recombination if large dithers are used. Targets for laser operation must be defined in advance, reducing the flexibility. SAM can deliver poor resolution under unfavorable conditions. 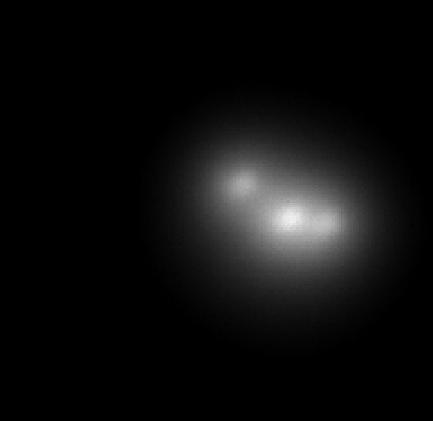 SAM is equipped with an Atmospheric Dispersion Corrector (ADC), which allows correcting for the atmosphere dispersion, especially when observing at large airmasses. It is particularly important when carrying out Speckle interferometry observations with the High Resolution Camera (HRCam). Watch this video to see the dispersion going from ZD=70[deg] to ZD=0[deg].