The following is a report on the current status of DECam CCDs that have presented problems in the past:

Fault: Very low full well following an over-illumination event in November 2012. Comment: This CCD is normally masked out in reduction pipelines. This failure prompted extra â€œno bright lightâ€ operations procedures for DECam, observations closer to 10 deg from the Moon are prevented, and we added extra protection photodiodes to supplement those already on the FPA.

Fault: Amplifier B has unstable gain, from installation September 2012. Comment: Generally the whole CCD is masked out in reduction pipelines. However Amplifier A does function correctly.

Fault: Stopped working November 2013, restarted 29 Dec 2016. Comment: It is postulated without any proof that a piece of electrically conducting debris within the Imager fell on exposed serial clock lines for this CCD, and then after three years fell off again. There are reports that the amplifier(s) are unstable at the 0.3% level so caveat emptor for critical work.

Fault: Hot spot started 10 Nov 2017, intermittent, not seen since January 2018. Comment: The hot spot was a charge defect and did not generate light. Generally hot spots are associated with a pixel-level defect, e.g. a short in the gate structure, and are not intermittent nor do they heal themselves. So there is no explanation for why this very prominent defect disappeared, with the affected pixel (800, 2630) now looking completely normal.

Fault: Poor serial charge transfer on amp B, started 31 August 2018, intermittent, most recent incident 20 October 2018 Comment: This was diagnosed as a fault associated with a single serial clock line (H3). All relevant external hardware (clock card, transition card, cables to VIB) has been changed, but the fault kept reappearing. It was discovered that a script which toggles vsub for all CCDs, and disables/enables the clock lines for the associated backplane (#5, 18 CCDs), fixes the fault. This could be understood if it was clearing a latched driver.

ault: Half of each of these two F&A CCDs has low full well (10%). Comment: Diagnosed as damage to output amplifier or signal chain inside the Imager. Since installation, September 2012.

Fault: Has developed a super-hot pixel (~1645, 2096), since 9 April 2015 Comment: This is on the very edge of the format.. It was previously known as a slightly hot pixel, now it is very bright, clearly visible on bias exposures.

Every time the DECam CCDs are warmed up and cooled down again the conduction between the CCDs and their mount can change very slightly, and with it the operating temperature for the CCD relative to the average for all the others. This temperature change means that the CCD response cutoff near 1.05 microns can change slightly (warmer CCD implies redder cutoff), and this can be seen in the relative flat-field response through the Y filter, which has detector-defined red cutoff. Such changes have been seen now and then but they are always very small (no more than a 1% change in Y band throughput), although a possible 2% change for CCD 27 = S3 as a result of the 2018 March warm/cool cycle is under investigation by DES. As expected, this is a Y-band effect only. 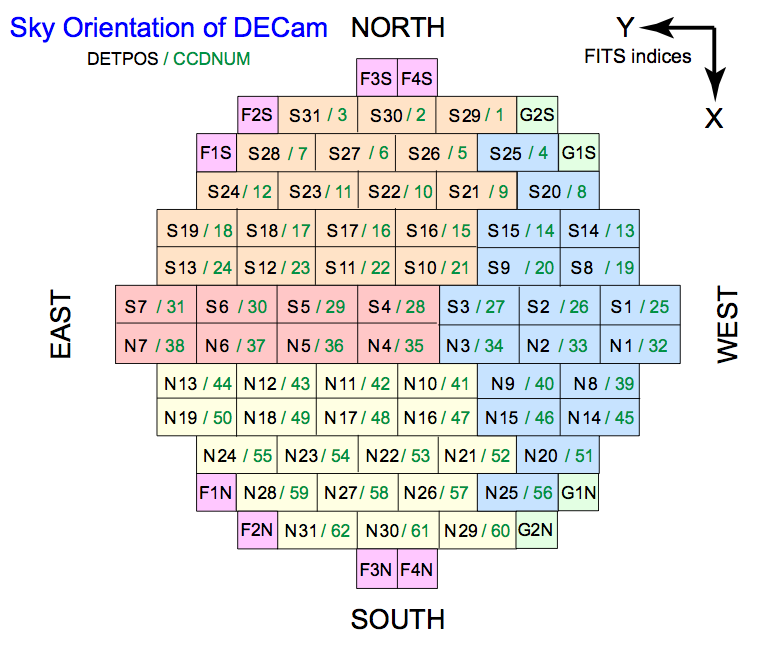