In the past, these observations were performed using high-speed cameras brought by visiting astronomers for temporary installation on the telescope. These small, portable instruments interface easily to SOAR, and have been used on multiple visits. However, such observations require significant logistics and advance planning.

In 2015, one of these occultation cameras was installed permanently on an available port at the optical Nasmyth focus. The camera installation had the financial support of the Observatorio Nacional (ON), and was carried out by a team led by R. Vieira-Martins, H. Dottori (SOAR Director at that epoch), Pierre Bourget (Engineer, ESO, who was responsible for the project and optics), Julio Camargo and Felipe Ribas (ON). Additional support was provided by SOAR scientific and technical staff.

Julio Camargo has been responsible for operation and support of the camera since its installation.

Since the instrument is permanently installed, observations can be triggered when astronometry confirms that an occultation is likely, instead of having to rely on predictions made many months in advance.

In the last month, two occultation events were successfully observed at SOAR. The first is an occultation by Phoebe, which is an irregular satellite of Saturn. The figures below shows the light curve (left) and an image of the field of view of the camera (right). A short movie of the occultation event is here.

The second event was by the trans-Neptunian object 2010 EK139; the light curve for that event is shown below: 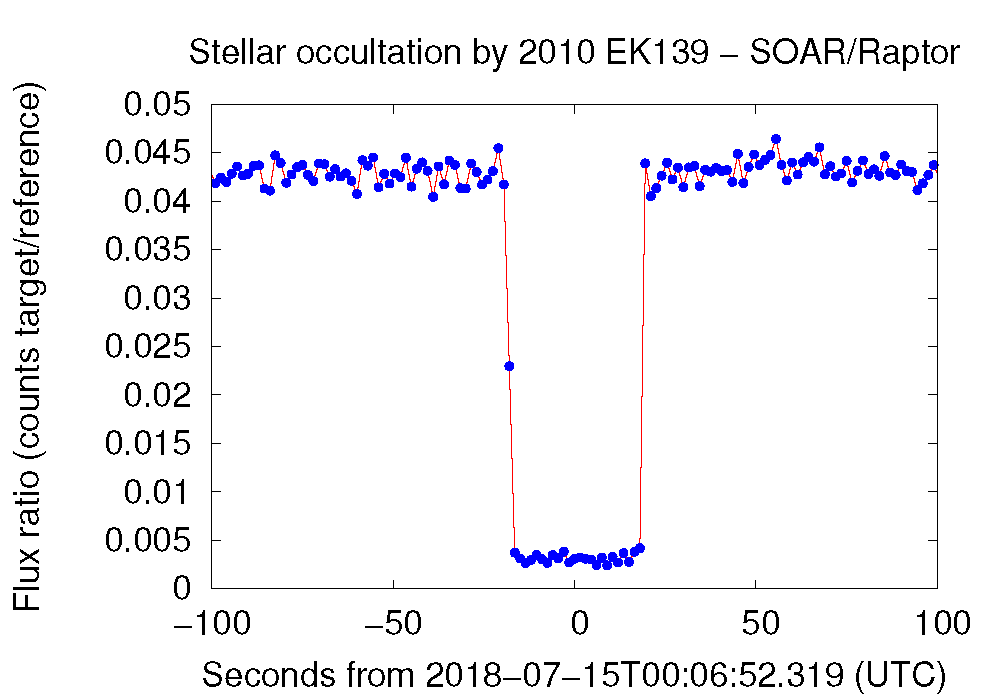 Both observations were triggered as targets of opportunity, interrupting regularly scheduled science programs for enough time to set up on the target and complete the observation.