NASA’s Transiting Exoplanet Survey Satellite (TESS) released its first list of exo-planet candidates on Sep. 5, 2018.  This list comprises 73 objects, of which a subset of 46 candidates was observed with HRCam on SOAR, on Sep. 24, with the goal of detecting close companions. A quarter of the targets were found to have such companions, with separations ranging from 0.08" to 1.5". Only two of those binaries were known previously.

The mosaic below shows speckle auto-correlation functions of some newly detected TESS binaries (the square size is 2.8", separations are indicated).
Companions either produce false positive alerts  (a faint eclipsing  binary masquerades as a planetary transit if  blended with a brighter star) or  are genuine physical binaries hosting planets. In the latter case, it is important to account for the light of the companion when measuring the eclipse depth, determining the planet radius, and eventually measuring the physical properties of the planet and its atmosphere.

This work is part of the TESS followup effort.

The team responsible for the observations is Carl Zeigler (U Toronto), Nicholas Law and Andrew Mann (UNC), and Andrei Tokovinin (NOAO). 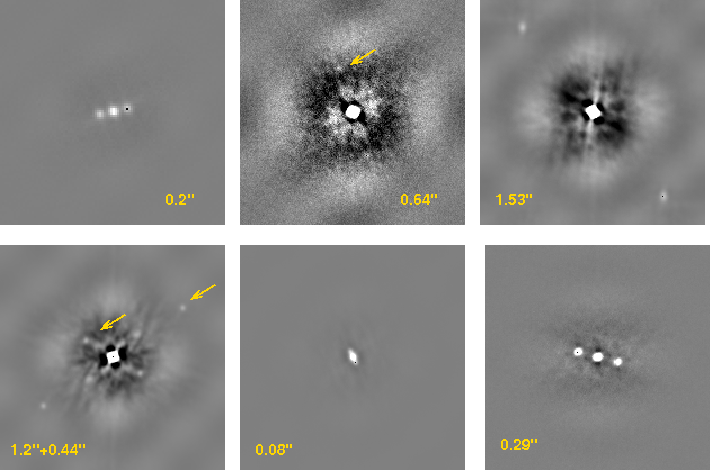