Since (at least) 1999, the SMARTS 0.9-meter telescope has utilized a single instrument, an optical camera with a CCD detector that is 2048 pixels on a side. The scale of the CCD is 401 milliarcseconds/pixel, thereby providing a full field of 13.69 arcminutes, or about 46% the width of the full Moon. The stability of the instrument configuration permits long-term studies that are impossible to do on most telescopes, including one of the largest astrometric programs in the world.

The facility continues to be upgraded, with recent efforts such as new motor bearings for the RA and Dec motors (2019), a new Mac observing station (2018), a new Torrent controller and software for the CCD (2016), and new floors, bathroom, and paint (2013). 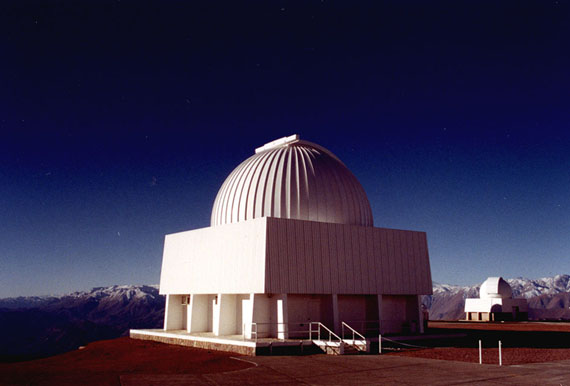 The 0.9m dome, located at Cerro Tololo Inter-american Observatory (CTIO) in the foothills of the Chilean Andes.

Constructed in 1965 by Boller & Chivens, the 0.9m is a closed tube design telescope, with instruments attached at the bottom at the Cassegrain focus.

The golden dewar contains the CCD detector used for science observations. Electronics and filters are housed in the surrounding black, silver, and gold boxes. The dewar is filled with liquid nitrogen, which has a temperature of 77 Kelvin, in order to keep the "background" low on the detector. The background is comprised of electrons, which are also used to detect light on the detector. So, if fewer electrons are free because of a lower detector temperature, faint signals that generate few electrons in the detector can be better measured.

The CCD can be seen through the final optical element in the light path, the dewar window. Occasionally, the dewar is disconnected from the black box that holds filters and additional optics used to focus images onto the CCD, primarily to clean the window.

The observing room is cozy, including a new floor (not shown) made of imported Peruvian tile.