Because SOAR is an Alt-Az telescope, it cannot track objects at zenith. The telescope has the following limits in elevation: 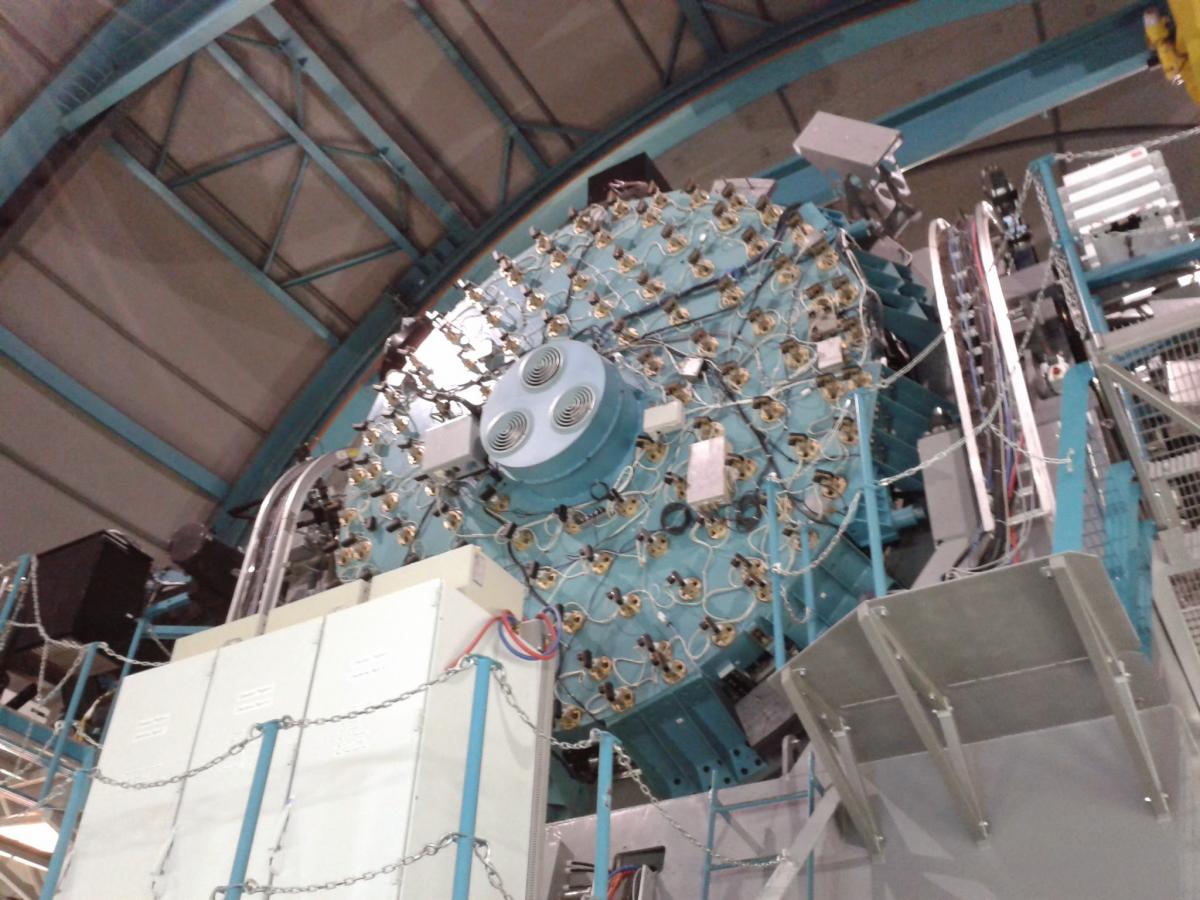 Overheads with the SOAR Telescope

Overheads depend on many issues, like how widely distributed your targets are on the sky and what instrument/configuration you are using. However, for the guidance of the user when preparing the observations, we post here some general figures:

1) Overheads due to Telescope+Dome+Nasmyth Rotator.

For all-sky slews the average overhead is 2.4min. This is from the moment the Telescope Operator selects a new target, to the moment the telescope is guiding on its next field. If you are moving from object to object on the same part of the sky (a few degrees) this overhead goes down to ~1min. However, even in all-sky mode you may have as little as 1m25s of overhead or as much as nearly 5min. This depends on whether you moved 20 deg in azimuth but at roughly the same elevation or if you are now pointing to the other direction of the sky, and going from a low elevation to a high elevation, such that not only the telescope has to slew over ~180 deg, but the main mirror optics have to readjust for the large change in elevation, and the Nasmyth rotator may have to move by a large amount.

This is the recommended mode for acquiring most targets in spectroscopic mode down to V~19, in fields which are not too crowded, or complicated by the total lack of other stars in the GACAM ~1x1.5 arcmin FOV. For bright targets the average acquisition time can be as short as ~1-2 min (from the moment the Telescope Operator has locked on a guide star, to the moment you click on the Start Exposure button), because GACAM integration times of 1-5s will suffice. If the target is faint, closer to V~19, the required exposure time in GACAM can be as much as 15-30s, depending on whether the target is a point source or extended. For these faint targets the total on-slit acquisition time will be of the order of 5-6 min.The GACAM also provides savings in time by doing away with the need to move anything other than the slit positioner, including avoiding changing the readout mode when going between imaging and spectroscopic mode.

This is the original acquisition mode of the GHTS. It is the default mode for observations in Multi-Object Slit (MOS) mode, and is also recommended for very faint, specially extended objects, or otherwise complicated fields (too crowded or no other stars in the GACAM FOV). In this mode an image of the target is first obtained in Imaging Mode, then an Image of the slit (or slit mask in MOS mode), in order to calculate the offset between object and slit. Measurement of the target, and the slit positions, is done interavtively in IRAF. Usually a third image is done to make sure the target is well centered on the slit.
The whole process, assuming 20s exposures and a 10s readout (in 344 kHzATTN3 mode, with 2x2 binning) if done efficiently, requires on average ~6-10min.

This instrument uses its own guiders, and requires a pre-image to determine a precise offset so the small field-of-view guiders (~10x10 arcsec) can zero in on any selected guide star. The overhead from one target to the next, assuming they are in the same part of the sky, is ~6min.

Therefore, if doing spectroscopy with Goodman + GACAM, estimate ~ 2 min overhead per target to be conservative. For Goodman + pre-maging,   estimate average overheads of ~ 8 min per target. With SAM, ~6-7min.

There are several good practices when observing with SOAR that will help you minimize the overheads:

Another penalty you incur as the result of making many large slews is time lost waiting for the dome to reach its position for the selected target. Because the dome rotates slower than the telescope slews, pointing to a location far from your previous position means you will probably have to wait for the dome to complete its movement (the dome moves at a rate ~1deg/sec, so turning 180 deg takes 3min.