Typically, ISPI observations are short and unguided. This simplifies the execution of large mosaics. If dithering about in a restricted area for a long time, then guiding can be useful to improve or maintain image quality. The guide field is provided by the portion of the telescope field which is viewed "past" the tertiary mirror (M3) which delivers the science field to ISPI by a 45 deg reflection. M3 and the guider both live in the white rotator box fixed to the back of the primary mirror cell. 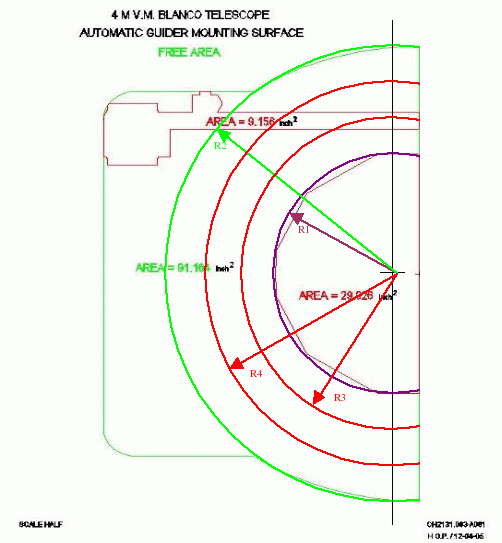 The M3 mirror as viewed from above. The mirror is actually an elliptical shape but appears round since it is mounted 45 deg to the optical axis. The guide field is to the left in this image. 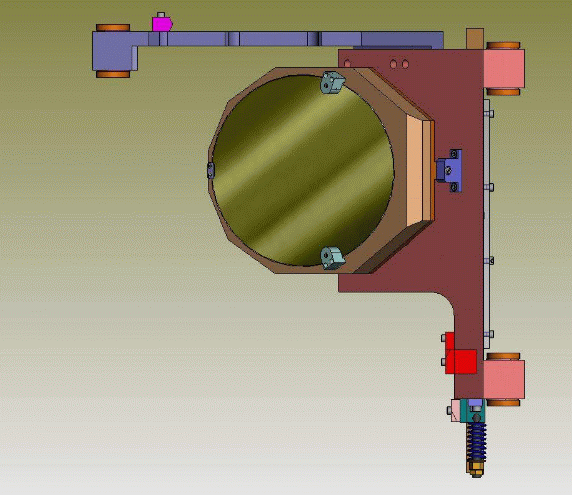 This sketch shows the available guide field using the F/8 guider. The inner radius is 15.35 arcmin and the outer radius is 23.03 arcmin as measured from the center of the ISPI field. Guide stars should be chosen toward the center of the annulus if possible (i.e. between R3 and R4). This will allow for the guide stage to follow the offsets for dithers of several arcmin. If you need to offset further (e.g. to take separate sky frames), make sure to have the night assistant turn off the guiding before the offset is made. The scale is 6.58 arcsec/mm.