Arcon requires set up information from the instrument to fill the image headers produced with each Arcon exposure. To get the header information Arcon reads the appropriate header file generated by a GWC router client called icsInfo. Icsinfo is a configurable header information server that collects the header data from different sources through the GWC router and writes it down to a file which is read by Arcon at the end of every exposure. The picture below illustrates this architecture. 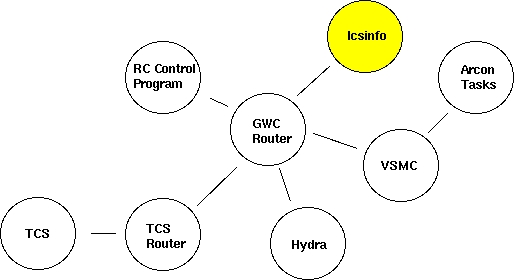 The icsInfo is a TCL script that starts up automatically at Arcon boot time. The script runs forever waiting for Arcon requests to write down a header information file in the /tmp directory. The information included in that file depends on configuration files specific for each instrument.

The icsInfo source code lives at /a1xp/source/sun/icsInfo directory. The directory structure is as follows:

Usually the icsInfo program starts automatically as part of the Arcon configuration set up  of the instrument. The program is launched from the instrumet_init.cl Iraf script. Still it is possible to start the program manually by typing start_cs4m_info (RC-Spectrograph) at the Iraf command line.

The program will then look for the configuration files specific to the instrument in the icsInfo/Config/cs4m (RC-Spectrograph) directory. The configuration files are headers.conf and telem.conf. The file headers.conf lists the different GWC variables that icsInfo will subscribe to in order to receive header information of the instrument. The file telem.conf defines the appearance of the header file to be generated (keyword name, comments and position)

Once running the program it will present a prompt at which the user can type TCL commands. A very useful command is "fillheader". This command will dump to the screen the header file including the most resent data available.

Note: Replace the word cs4m with the arcon name of the instrument you are using. For example if you are using hydra the start up command will be start_hydra_info and the configurations files will be at icsInfo/Config/hydra.