Afternoon calibrations will normally be started around 4pm. This is usually done by the Observer Support Team. A standard script is used for these calibrations which will take 22 bias images (11 before the flats and 11 after the flats) and 11 dome flats with each filter ugrizY and VR. To find the standard script for daytime calibration use the button Load Exposure Script and find the directory /ExposureScripts/. Choose the file Daily-DomeFlats.json

Counts for the dome flats can be checked with the command flatCheck, within Kent's Tools, which will produce a plot like this: 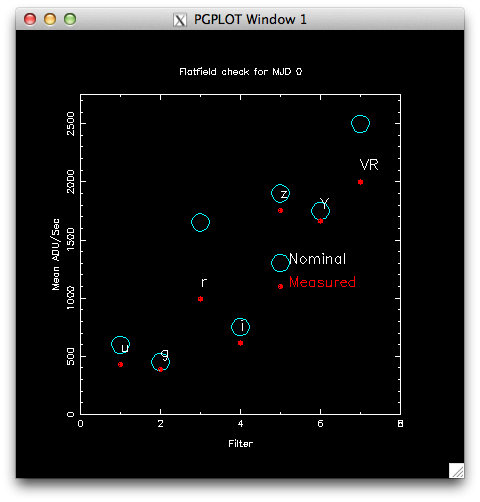 Be sure Vsub is off after calibrations are finished. This should be done automatically by the calibration script but it is a good practice to check that was indeed the case.

Sky flats are not allowed with DECam.