On the night of September 16, a major earthquake occurred in Chile, with its epicenter near Illapel, south of La Serena and Cerro Pachón. The effects of the earthquake are being widely reported elsewhere; this note is restricted to the impact on SOAR.

Fortunately, nobody on the local staff or their family suffered any injuries, although in some cases family members were affected by flooding from the tsunami that struck coastal areas.

On the 17th, an emergency crew went to the telescope to perform an initial evaluation. The road to the summit was passable with caution. Most of the facility was in good condition, but evaluation of the telescope itself showed that there were problems with the mount (both axes) which appeared to be due to loss of encoder alignment. Until mount functionality was restored, we could not complete inspection of the optics, where the secondary mirror was of particular concern - accelerometer measurements made during the earthquake imply a peak acceleration at the secondary around 5 G (measured peak acceleration in the pier was ~0.45 G).

On Monday (21st) the day crew was able to realign the encoders for both axes, though full checkout of the motions was not completed. The instrument rotators were also checked out. The secondary baffle was removed and the secondary was found to be undamaged, although a bolt attaching the secondary mounting flexures to the hexapod needed to be replaced.

During the evening, operation of the instruments needed over the next ~2 weeks (Goodman HTS and SAM) was also verified.

The following day, the full range of motion of the mount axes was exercised, inspection of the top end was completed and the baffle was re-installed. The dome and shutter were inspected and verified to be operational.

Checkout of the active optics systems showed no problems, at least at the level that could be verified without a star; the telescope was therefore declared operational and available for science.

Unfortunately, bad weather prevented the telescope operators from opening the dome until the night of the 25th - at which point the optics were checked out, but immediately afterward an unusually strong aftershock struck and misaligned the encoders again! A crew went up the following morning (Saturday the 26th) and re-aligned everything, and as of that evening (26th) the telescope was operational and performing science observations.

The continuing aftershocks have occasionally stopped observations, but when this occurs the operators have been able to recover reasonably quickly and not much observing time has been lost.

The efforts of the day crew in bringing the telescope back into service safely and efficiently deserve special thanks; we also want to thank ETS staff for their support of these efforts.

This should be the final update....

The plots below show the accelerometer readings from the pier and the secondary mirror assembly during the main earthquake event. Analysis is not complete, but results from an earlier event indicate that the amplification from the pier to the secondary can be as large as a factor of 30 at resonant frequencies of the secondary assembly. 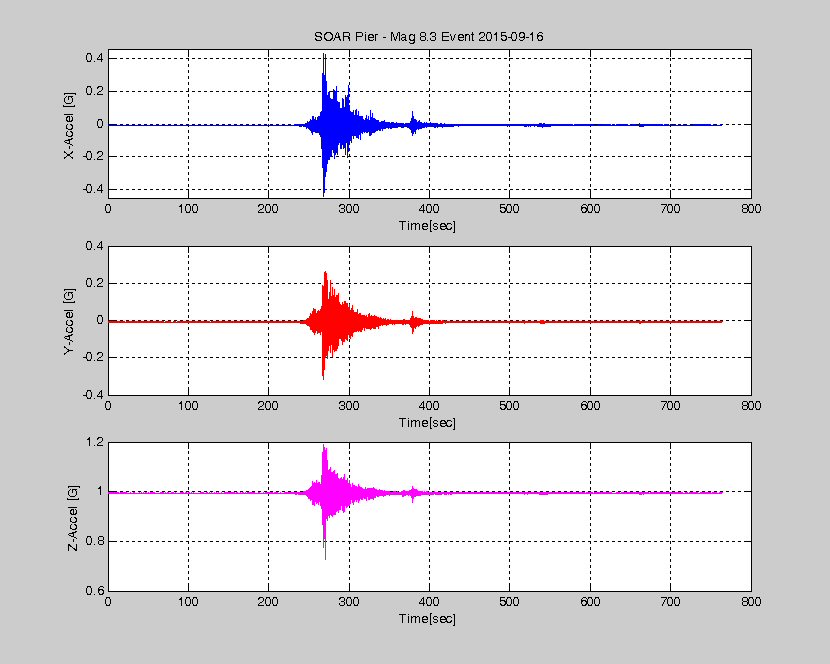 Accelerometer readings from SOAR pier (top) and M2 assembly (bottom). Note that the forces exceeded the saturation point on the M2 accelerometer fpr bpth the X and Z axes. 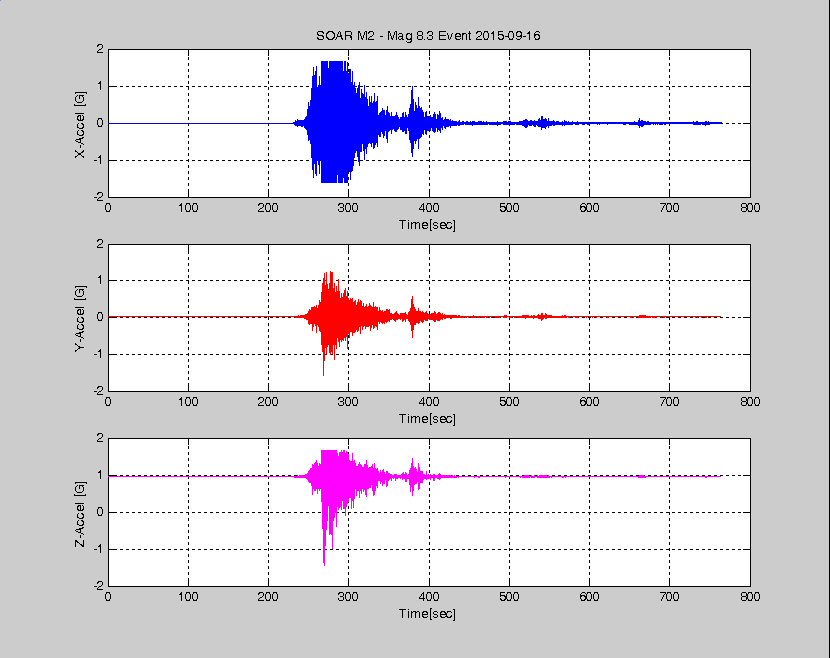