SAM compensates partially turbulence in the atmospheric ground layer and in the telescope dome. The delivered image quality (DIQ) approaches the free-atmosphere seeing produced by turbulence above ~0.5km. When the free atmosphere is calm, SAM provides an appreciable gain in the DIQ, but when the total seeing is dominated by the free atmosphere, the gain from using SAM can be marginal and the DIQ can be mediocre. This is illustrated by the two figures below. 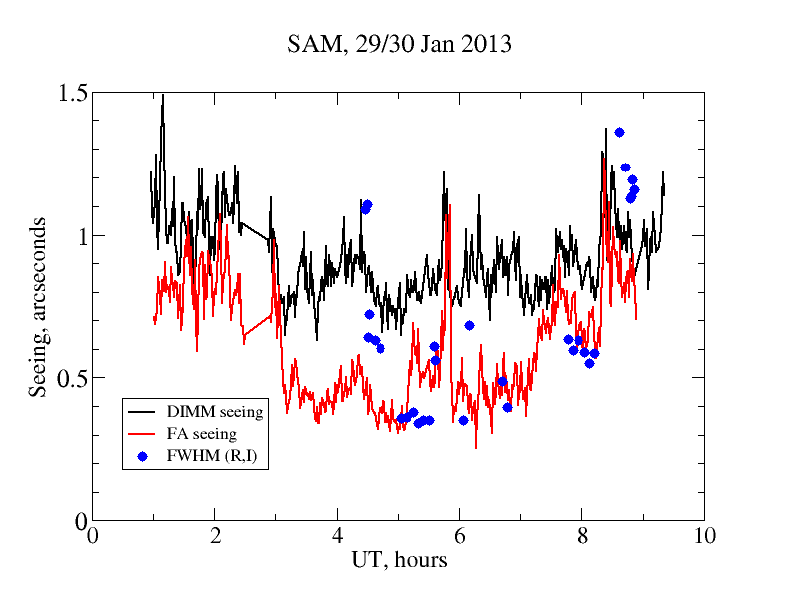 Left plot: on February 26, 2013, the free atmosphere (red line) was calm, the DIQ in the I band (blue dots) was between 0.3 and 0.4 arcsec FWHM - much better than the site seeing (black line). Right plot: one month before that, on January 29, 2013, the seeing was less stable and often dominated by the free atmosphere. In these conditions the DIQ could be worse than 1 arcsecond, and the resolution gain provided by SAM was variable. Note that the site seeing was similar on both nights. The performance of SAM depends on the free-atmosphere seeing , not on the total seeing! 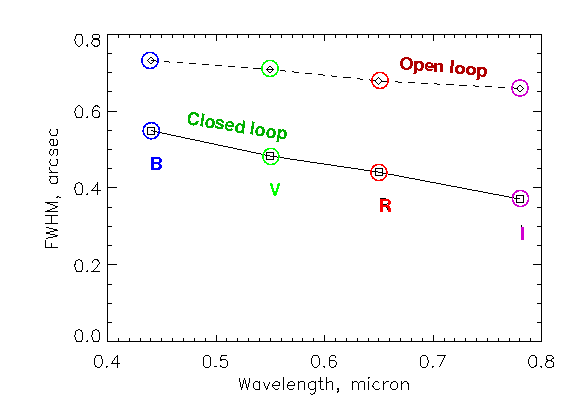 Turbulence compensation in SAM is partial, better at longer wavelengths. The DIQ of SAM depends on the wavelength stronger than the natural seeing. The plot above shows the median DIQ for a good night of March 6, 2012, in closed (compensated) and open (uncompensated) loop. Yet another consequence of partial compensation is that the point-spread function is more "peaked" compared to the natural seeing. It can be modeled by a Moffat function with beta~2. With such PSF, the encircled energy is improved, but not as much as the FWHM resolution.

The plots below show FWHM resolution as function of the star position in the field. The data were obtained on a good night of March 3/4, 2013 in the I band, when SAM provided a very good resolution. The uniformity over the field is excellent. However, some degradation towards the field border is seen in the left plot. It is produced by partially compensated turbulrnce at low altitude.

This material is based on the SAM Commissioning report.  Additional information can be found in the SAM Science Verification Report.