Note that when the observation is executed, the control software at SOAR sends real-time updates of the status of each part of the observation process (e.g., actual start and end of target acquisition). This means that the actual overheads are adjusted in real time. For example, for most targets the acquisition time is less than the estimated 20min. At the end of the observation the actual elapsed time is used at Las Cumbres to 1) update the schedule and 2) compute the actual time to be charged to the program. The scheduler updates roughly every minute. This means that the content of the queue may, and on most nights does change during the night, depending on how smoothly the observations progress.  For proposing for AEON on SOAR, users should use the full overheads as described above.

If for some reason the observation takes longer to get started, there is an allowance of a few minutes before it is aborted. Such occasions are rare.

AEON scheduled on 25 nights (19 nights with the Goodman RED camera and 6 nights with the Goodman BLUE camera - see the 2023A calendar), for 13 programs totaling 250h: 9 programs with Goodman, and 4 programs with TSPec.  Following the requirements of the various Goodman programs, this semester we only offer only the 400 line/mm grating in spectroscopic mode in Goodman. Imaging with Goodman will use the SDSS-g,r,i,z filters when the RED cammera is installed, and the SDSS-g,r,i and the wide VR filter, on nights using the Goodman BLUE camera.

With both Goodman spectrograph/imager instrument and TSpec 4.1 near-IR spectrograph, users can now obtain spectroscopy of their targets spanning the entire optical wavelength range, from the atmospheric cutoff, and going out to the near-IR, to 2.2 microns (K-band).  Observations with TSpec in 2022B will be limited to a simple ABBA dither pattern; the separation between the A and the B position is 12.7 arcsec. The overhead for changing from Goodman to TSpec and viceversa is 2 min.

A simple Exposure Time Calculator can be found in the TSPec page.

TSpec4.1 is the same instrument formerly known as ARCOIRIS, previously installed at the f/8 focus of the 4m Blanco telescope at CTIO. Users should note that because at SOAR TSPec  is fed by reflection off a dichroic, which also transmits light to the guider, the response cuts off below 1.0 microns. The nominal point of 50% reflectivity of the dichroic is around 0.95 microns. A comparison between the response on Blanco and SOAR can be found at this page.

Both Goodman BLUE and RED cameras are available.  Since demand is highest for the RED camera, most nights (18 out of the 24) are allocated with this detector. However, users should note that the RED camera is comparable in sensitivity to the BLUE down to around 4000A. More details about the advantages and caveats for each detector are described in the Goodman Instrument Characteristics page.

NEW: Programs can request targets for either camera, and will also be able to request observations in either spectroscopic or imaging mode. Las Cumbres Observatory will simply keep the accounting of used hours against the total time allocated to each program, regardless of which camera has been used, or which mode.

Because selecting one or the other detector is a daytime task, users are limited to using the camera scheduled for that particular night. However, imaging and spectroscopy capabilities are always available with both cameras; for example, an user can submit a request for images AND spectra of the same object, of course, only with the configurations supported by AEON. See below for the configurations supported this semester.

Detector noise characteristics for AEON data:
All AEON data are collected using a single fixed readout mode: 344ATTN3 for the RED camera, which corresponds to a readout noise= 3.9 e-,  and gain=1.5 e-/ADU, and 200ATTN0 for the BLUE camera, which corresponds to a readout noise=4.7e-,  and gain=1.4 e-/ADU (see the Goodman Cheat Sheet). The readout, region of interest and binning are set automatically for each mode and are not user-selectable, therefore users will not see these as options in the Las Cumbres Observation Portal. Users only have the option to request the appropriate mode (e.g., 400M1 if requesting a spectroscopic observation, or the filter if it is an imaging observation). 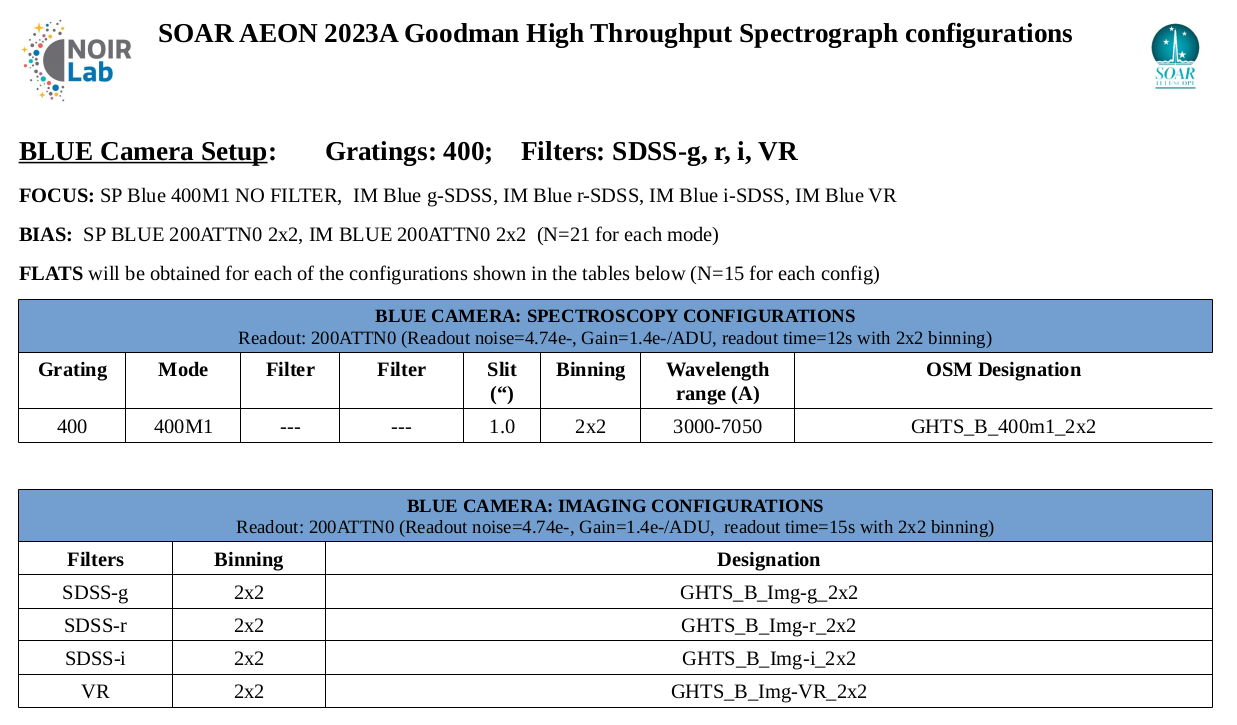 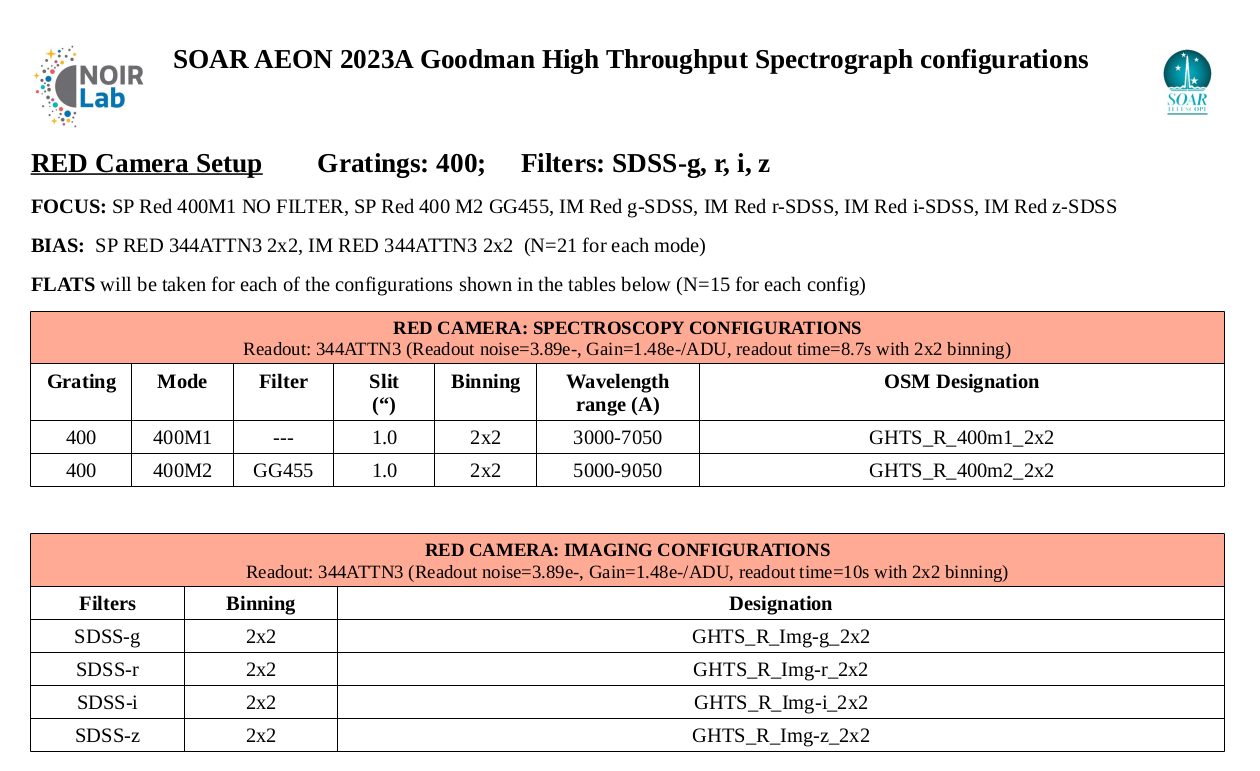