The WIYN 0.9m Observatory supports the current and future research and educational needs of its scientists by operating and maintaining the 0.9m facility at its highest standards. The 0.9m Observatory strives to develop opportunities to enable frontier astrophysical research. Having a research grade facility available to graduate and undergraduate students, alike, enables students to connect directly with science.

In 2001 the WIYN Consortium, led by the University of Wisconsin-Madison and Indiana University, assumed operational responsibility for the historic 0.9-meter (36-inch) telescope at the National Science Foundation's Kitt Peak National Observatory. As part of acquisition, the consortium chose to upgrade the control system, install new motors and encoders in all axes, for a state of the art observing facility.

The name of the telescope (the 0.9-meter) reflects the size of the primary mirror. The 0.9m is a Cassegrain telescope with a focal ratio of 7.5. In Spring of 2014 we received a new, state-of-the-art imager called the Half Degree Imager (HDI). HDI is a single chip, multi-amplifier imager with a field of view of 29 arcmin - over double the sky coverage of the old imager. Using all 4 amplifiers, image overhead is a mere 15 seconds, with 5e- of read noise. HDI has closed cycle cooling, so liquid nitrogen and dewar fills are a thing of the past. Despite its relatively small aperture, the 0.9m is a popular telescope because of its large field of view.

When most people imagine astronomers at work, they envision someone sitting in a dome looking through an eyepiece on a telescope. The reality is actually very different. Rather than look through an eyepiece, astronomers use sensitive electronic CCD cameras. Instead of sitting beneath the telescope in a freezing cold dome, they reside in a warm control room in front of computers which control the telescope and the camera. The telescope itself resides on the second floor of the building. It is enclosed in a dome to protect it from wind, rain and snow. Eleven dome vents were installed in August 1994 to increase airflow through the dome, which has significantly improved the image quality. 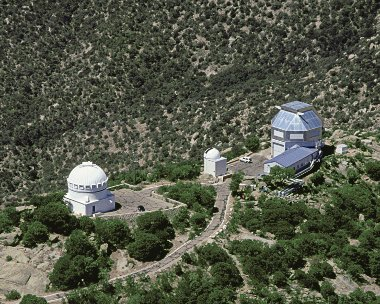