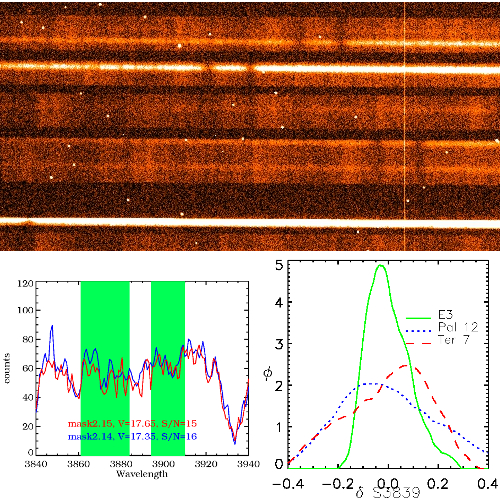 A team of MSU astronomers used the newly commissioned MOS capabilities of the Goodman spectrograph at SOAR to study 23 red giant branch stars in the low-mass cluster E 3 (See top panel of figure for an example of the raw MOS data). By studying the cyanogen (CN) absorption features in the blue part of the spectra (bottom left panel in the figure), they have found a very narrow distribution of the CN abundance (in the bottom right panel compared to the CN distribution in the low mass clusters Palomar 12 and Terzan 7), consistent with a cluster hosting only a single stellar population and no signs of self-enrichment. E 3 would be the first bona fide Galactic globular cluster hosting a genuine single stellar population.
Jul 27, 2015
Reference: R. Salinas & J. Strader, ApJ in press, http://arxiv.org/abs/1506.00637