NOIRLab Astro Data Lab facilitates the exploration and analysis of the large datasets now being generated by instruments on NOIRLab and other wide-field telescopes. It allows us the access to high-value catalogs from NOIRLab (eg. DES, DECaLS, DECaPS, NSC) and external sources (e.g. SDSS, GAIA), and NOIRLab-based images linked to catalog objects. Stars in those catalogs may be used to calibrate your DECam data. For more information about NOIRLab Astro Data Lab and its services, visit its webpage: NOIRLab Astro Data Lab.

The NOIRLab Source Catalog (NSC) is a catalog of nearly all of the public imaging data in NOIRLab's archive, almost covering the entire sky. The NSC is a catalog of sources from most of the public data taken on CTIO-4m+DECam as well as KPNO-4m+Mosaic3 and some from the Bok-2.3+90Prime. The second NSC public data release (DR2) contains over 3.9 billion unique objects, 68 billion individual source measurements, covers 35,000 sq. deg. of the sky, has depths of ~23rd magnitude in most broadband filters (u, g, r, i, z, Y, VR) with ~1-2% photometry, and an astrometric accuracy of ~2 mas. The NSC DR2 overview paper (Nidever et al. 2021) describes the catalog in detail, including the source extraction, calibration, combination, quality assurance, and science use cases. To learn more about the NSC and how to access the data through the NOIRLab Astro Data Lab, click here. 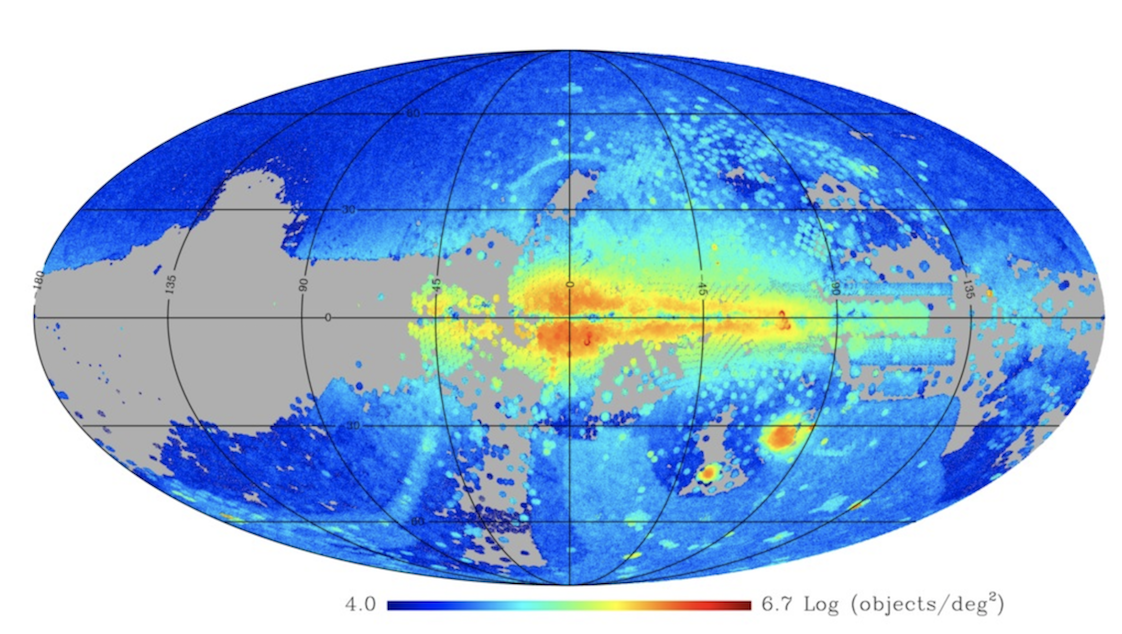 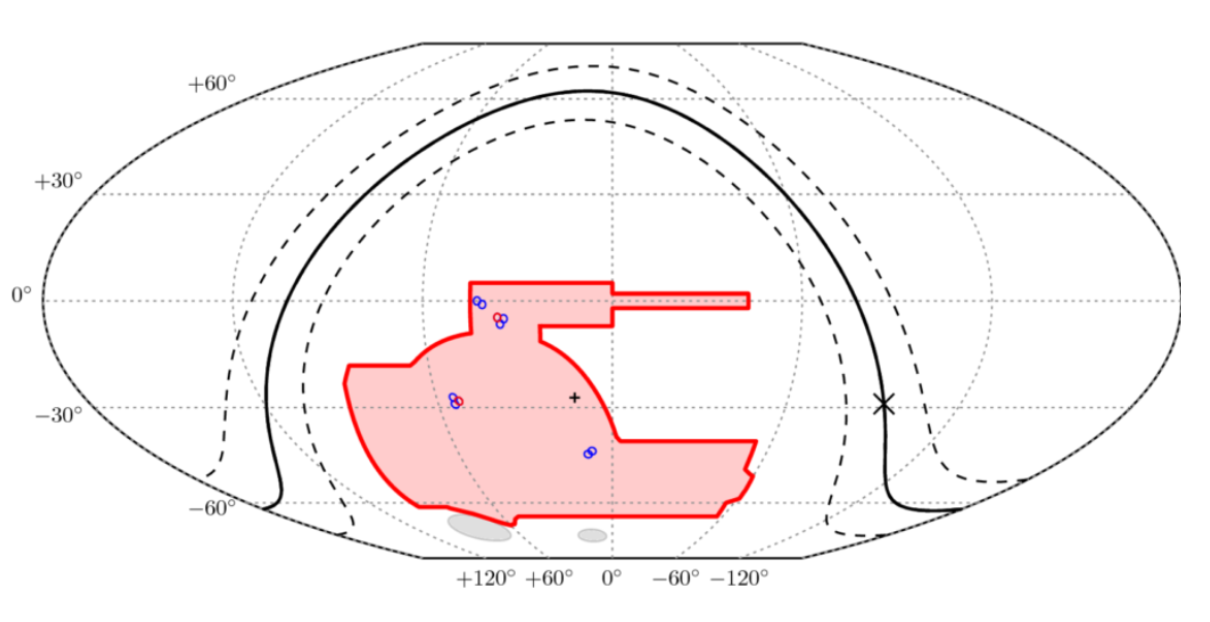 The DES survey area in celestial coordinates. The ∼5000 sq. deg wide-area survey footprint is shown in red. The 8 shallow supernova fields are shown as blue circles, and the 2 deep supernova fields are shown as red circles. The Milky Way plane is shown as a solid line, with dashed lines at b = +/-10 deg. The Galactic center (‘x’) and south Galactic pole (‘+’) are also marked. The Large and Small Magellanic Clouds are indicated in gray. [Credits: DES Collaboration.]

You can find a more detailed information about this survey in the DES webpage and in the DR2 release paper.

The DECam Legacy Survey (DECaLS) is part of the NOIRLab Large Surveys programs. It is a public survey and it was originally proposed to only cover the SDSS-III equatorial footprint but the project was extended to enlarge the footprint to the full Dark Energy Spectroscopic Instrument (DESI) equatorial footprint. DECaLS provides the optical imaging for targeting for 2/3 of the DESI footprint, covering both the North Galactic Cap region at Dec ≤ 32° and the South Galactic Cap region at Dec ≤ 34° (see Figure below). This survey will end up covering ~9000 deg² in the g, r, z bands to depths of g = 24.7, r = 23.9, z = 23.0 mag. For more information about this survey, read the Overview of the DESI Legacy Imaging Surveys paper by Dey et al. 2018 and/or go to the Legacy Survey webpage. 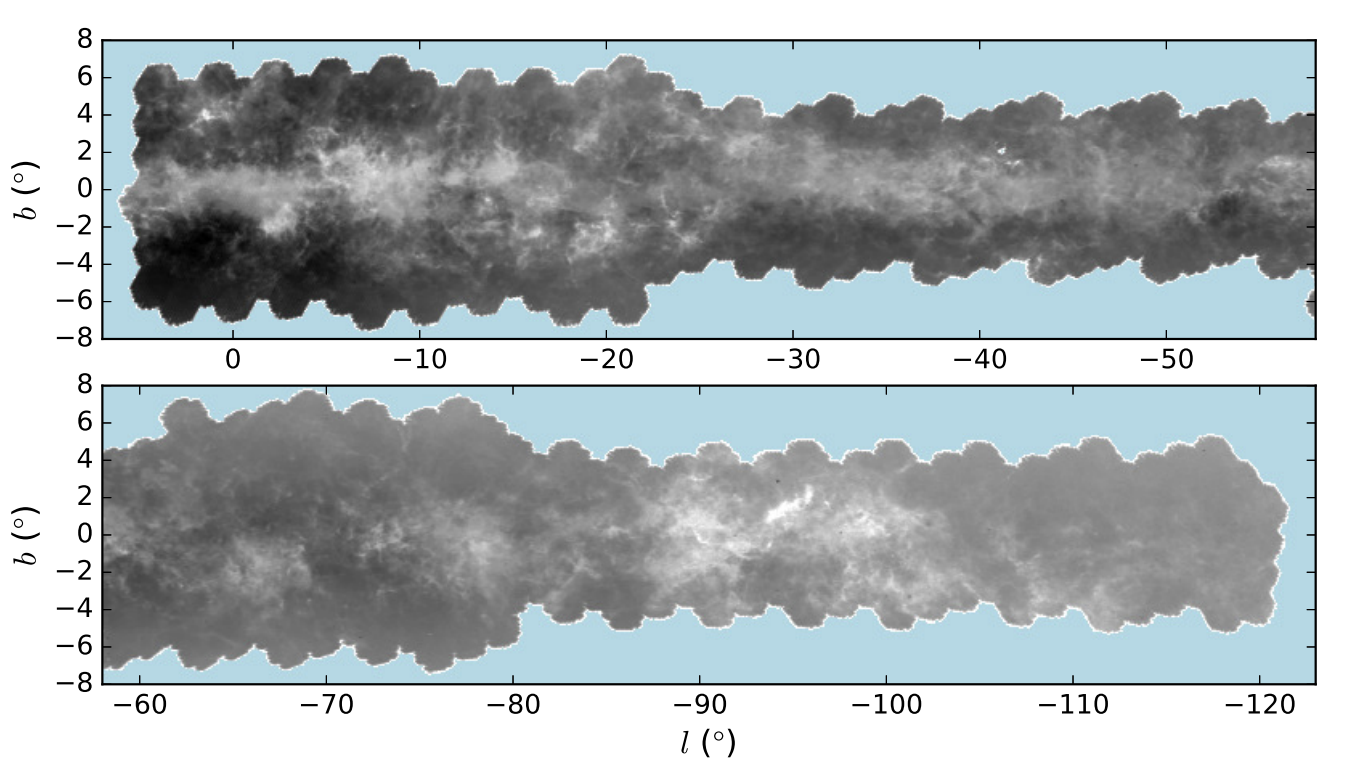 The DECaPS footprint. The figure shows the number density of sources detected in at least three bands, and brighter than 20th magnitude in r. [Credits: Figure 1 from Schlafly et al. 2017]

Online access to the PS1 public data page is available to the community from the Mikulski Archive for Space Telescopes (MAST) at STScI through the next link:

SDSS fields are the best choice for photometric standard stars since they will cover the whole DECam focal plane. In particular, Stripe 82, which was observed repeatedly by SDSS, is an excellent catalog for calibration containing more than 1 million stars down to magnitudes 19.5, 20.5, 20.5, 20.0, and 18.5 in ugriz, respectively (Ivezic et al. 2007). Stripe 82 is an equatorial stripe covering from RA = 20h34m to RA = 4h00m. Thus, portions of Stripe 82 are available during most of the night from June to December. The catalog is available here. SDSS filters are similar but not identical to DECam filters. Color terms are needed to transform between both systems.

The following SDSS fields (courtesy of Douglas Tucker) are observable between January and August and have been matched with UKIDSS to include Y photometry (Y-band data from Vega mags to AB mags via YAB = YVega + 0.634).

SOUTHERN STANDARD STARS FOR THE u' g' r' i' z' SYSTEM

For users with observational programs in the south, these standard fields will be located much closer in the sky to the program fields. However, they are small fields (a few arcminutes wide) that will be covered by just one of the DECam CCDs. Thus, they are useful for first order extinction determination but not for zero point differences among chips.

Notice that for these fields it is advisable to offset the coordinates given in the catalog to make the whole field to lie within one of the CCDs (and not in the gap between the two central CCDs). A shift of 5 arcmin in declination will place the field entirely on CCD N4.

At the telescope computers, there is a set of useful scripts kindly provided by Douglas Tucker which allows to:

To run the scripts from the computers at the control room (observer3 or observer2):

The script to choose an observable standard field (decamStdFieldTimeDate.py) may get invoked in this way:

To create .json scripts for standard fields use:

The README file contains the full list of the scripts in the StdStarPicker.

An additional tool to find standard fields at a given time is available within Kent's Tools. To use Kent's Tools open a terminal in observer2 and type:

This will give a list of 3 standard fields available at that moment (at low, medium and high airmass). You can also type standards UT (ex. standards 4:00).

Sometimes it is useful to share standard star fields among different projects/observers. This is specially true during nights shared by more than one project. The best way to do this is to set the observing keyword expType = standard in your observing scripts (instead of object). Exposures with this keyword do not have proprietary period and thus, they can be downloaded by anyone from the NOIRLab Astro Data Archive.

You are welcome to use the scripts already created by the DES collaboration, which include fields from SDSS Stripe 82, the Southern Standard Stars and others (these are fields that will be suggested by Kent's tools as described above). The scripts are located in the directory: ~/ExposureScripts/User_Standards/DES/ There are 4 sub-directories to choose (grizY/, Yzrig/, ugrizY/, Yzirgu/) depending on if you want to use or not the u filters and the order of observation (starting with Y is recommended if observing standards in the evening twilight, while starting with g is prefered during the morning twilight). These scripts have the keywork expType set to "standard" (see above).

These are links to previous results on zeropoint and extinction calibrations:

Photometric transformation equations between DECam filters and other systems can be found here.