Three windows that look like the images below should be on your screen. These are virtual desktops. ctioa0 runs the camera electronics and ctioa8 accepts and stores the images. Do not use the observing desktop for anything other than taking observations! (Why? The observing desktop runs on ctioa1, which is a very old machine. Your data are transferred to ctioa8 automatically by the DCA. If you type e.g. "display obj001.fits 1" in the Arcon window, you are asking ctioa1's slooow CPU to display an image that it accesses across the network. Bad idea!). 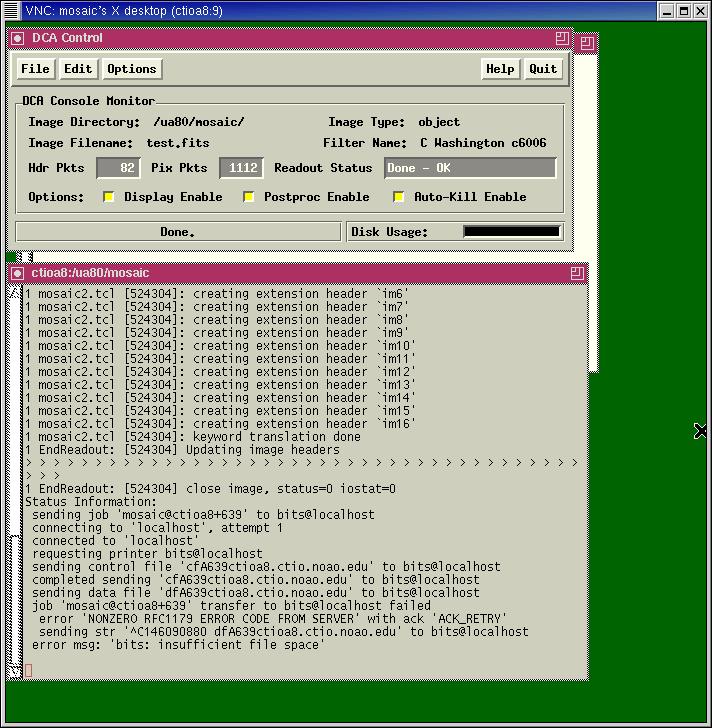 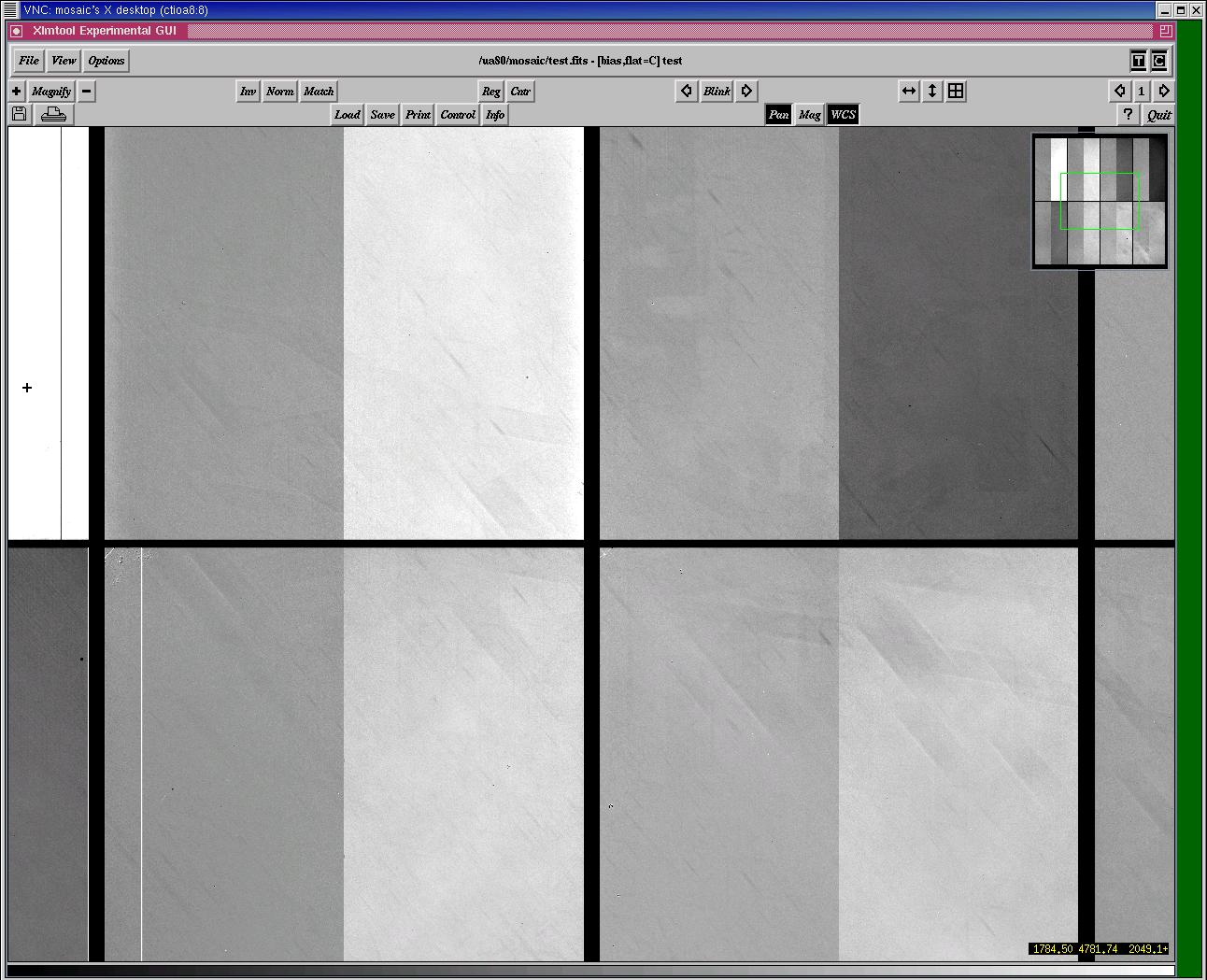 Typing "lpar obspars" will list the contents of obspars, for example, while simply typing "obspars" or "epar obspars" will allow you to edit the values. The exception to this last statement is detpars: to edit detpars, DO NOT type "detpars" or "epar detpars"--you must instead type "setdet force+", so as to ensure that your changes are updated in the instrument.

Calculate the offset needed to bring the star to the center (the pixel scale is 0.27 arcsec/pix), by then typing

Then move the mouse on the center of the star and hit the space bar. The teloffset values will be read out in the xgterm. You can have the night assistant do this offset, or you can do it yourself by typing

command in the Arcon Aquistion box. Bear in mind that DEC increases with X and RA with Y. Take another 1-second test to verify that you moved the telescope in the right direction, and by the right amount.

--this command reads the temperature of the upper truss and records it in the "temperature" parameter of instrpars, described above. It also takes a guess at the best focus value--use this value as the focus value of the middle of your sequence. Now type

specify an exposure time of 5-15 sec, and use the R filter (if you use another filter to do the focus, bear in mind that Arcon will add the focus offset listed in wheel1 to the focus when taking an exposure). Using the parameter values specified in telpars, Arcon will now take a sequence of N exposures, stepping the focus and shifting the charge by a number of rows between each one. After the exposure is done reading out, you will see an image containing columns of stars on the RTD. It will look something like this and like this if you zoom in.

In an IRAF window on ctioa8, type

You will now select stars to use in calculating the best focus. Place the cursor on the top star in a cleanly separated, unsaturated sequence and type the "g" key (always use the top star, regardless of whether or not there is a double step between it and its neighbor). A window will appear displaying the FWHM as a function of focus for that star. Type "q", place the cursor on the top star of another column, and type "g" again. Repeat this sequence until you have measured the focus profiles of 1-2 stars on each CCD. With the cursor in the ximtool, finally type "q". You will now see a window overlaying the focus sequences for all of the stars you just measured. If there are strongly outlying points, place the cursor on them and type "d", which deletes the information for the whole star associated with that point, Once you are satisfied, type "q", and the program calculates the best focus for you.

In mscfocus, you might prefer to use the "m" key (again always use the top star). Hit the "m" key for stars in all the different CCDs. When you have sampled a sufficient quantity, hit "q". You will get something like this:

Note the best focus value and fwhm, which is displayed on the top of the pop-up window.

Enter the best focus value in the "basefocus" parameter in instrpars, and change "reftemp" to equal the value in "temperature". If "setfocus" is set to "auto", Arcon will calculate the difference between "temperature" and "reftemp", multiply this by the temperature coefficient, and add it to "basefocus" before taking an image. Until you type "settemp" again, this focus adjustment will be 0. Later during the night, if you find that the temperature has changed significantly, type "settemp" before taking an exposure, and "temperature" will be updated.

If you don't like using "mscfocus", you can always use "mscexam" instead. "mscexam" works just like "imexam"--you can examine stars with the "r" or "e" key to pick which of the stars in the focus sequence is in best focus.

End Of The Night