One of the DECam science CCDs, N30, shows a very low full well and poor charge transfer efficiency. Observations taken with N30 are likely not going to be scientifically useful. Luckily this CCD is located at the edge of the focal plane array (see focal plane array here).

The Right amplifier of this CCD has very poor linearity and unstable (at ~10%) gain at count levels below ~ 600 adu.

Small squares of double-sided tape, approximately 1.5 mm square and 100 microns thick, were placed in each corner of the CCDs to maintain the relative position of the two aluminum nitride parts with a small gap between them. 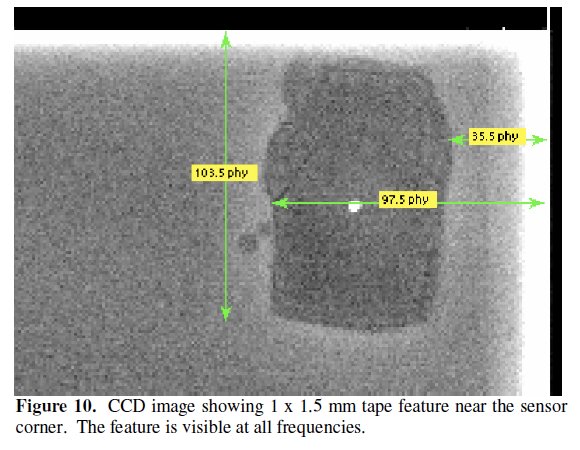 The tape bumps are an astrometric feature (along with the tree rings and the columns at the edges of the CCDs). Flat fielding can remove the tape bumps, but this is not the correct way to get rid of them from your data. The tape bumps are NOT stable though a thermal cycle of the focal plane, presently happening ~ twice per year. More information can be found here. Monitoring the stability of the tape bumps is ongoing.

Below is what happens when a bright saturated star falls in your CCD. 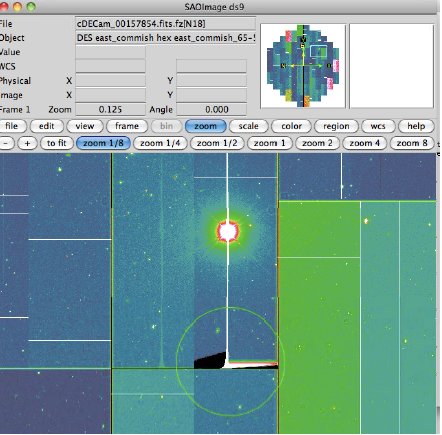 This may be caused by an overflow along the serial register. Every DECam CCD appears to exhibit this behavior. Further investigation and finding an appropriate fix is ongoing.

Other effects of the ghosts from bright stars can be found here.

Non-linear crosstalk is reported when source exceeds 60k ADU (260k electrons) for CCDs with negative crosstalk coefficients (about half of the CCDs). The crosstalk correction overcorrects the negative value. Further investigation and finding an appropriate fix is ongoing. FIXED.

In some CCDs, horizontal stripes, one or two pixels wide and the full CCD long as seen. These come almost always in pairs that compensate each other. The number of these bad columns varies from chip to chip--for example, Chip 1 has about 50 problematic columns, Chip 2 has none of concern. These funky columns do not occur in the bias and flat frames. More information can be found here. A list of these bad columns is being compiled. 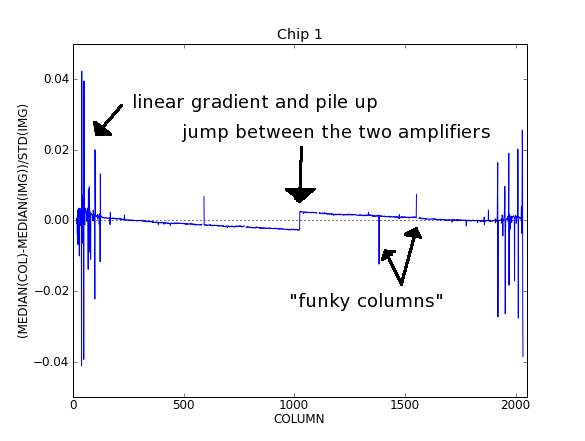 Discovered early in commissioning last year (see commissioning report week 2, Sept 21 2012), half of FS4 and half of FN2 have low full-well, about 10% of that expected. Because donuts are not stars and mostly have quite low maximum counts, these half-CCDs look pretty normal in most exposures. But if you do long exposures with lots of bright donuts and/or the sky level is close or exceeds the full well, things will look garbage, and are.