The SOAR guiders are a critical subsystem for the telescope and its instruments, since they control both the telescope mount and the tip-tilt tertiary, ensuring optimal image quality. The guider originally developed for the telescope provided these functions, but it became clear that additional capabilities were needed to ensure the best image quality when site-seeing was better than average.

Specifically, the need to adjust focus manually was a significant limitation. Either time was spent measuring focus at frequent intervals, or focus was slightly less than optimal much of the time. Analysis of the images also showed that residual astigmatism affects image quality under the best conditions; this can be corrected if its value is known. Additionally, the facility guider was showing its age; in particular, the detector systems were degrading and spare parts were no longer available. However, the development of a replacement system was not a trivial matter, as the volume within the SOAR instrument support structures is quite limited, with constrained optical paths.

In October 2016, a conceptual design for the new system was selected. Instead of producing a single spot just for guiding, a 4-element mirror is used as the basis of a 2×2 Shack-Hartmann sensor, which provides both fast guiding (using the common centroid of the 4 spots) and slow adjustments of focus and astigmatism (using images averaged over tens of seconds). An additional focus motion is needed to correct for field curvature over the patrol field of the guide probes. The guider thus combines low-level wavefront sensing with its guide capabilities. The details of the guider implementation are not the same for both the IR and optical Nasmyth foci, though the basic concept is the same for both.

Work started in 2017, and successful tests of a prototype were conducted in January and March 2018. A variety of circumstances slowed progress: loss of key staff members, discontinued production of the EMCCD camera that had been selected, and (not least) the COVID-19 pandemic, which first closed and then restricted access to the NOIRLab shops and lab and to the SOAR telescope.

Final integration resumed in late 2021, leading up to an initial engineering run at the telescope in May 2022. This served to identify several issues related to installation, and final installation took place during the contingency engineering run in July. Installation was successful, despite bad weather, and the first observations on sky were taken the night of 12 July. The guider loops were closed (see Figure) and guider performance was shown to be consistent with that of the prototype. (In fact, the need to replace the camera used in the prototype resulted in a significant gain in sensitivity.)

First light with the SOAR wavefront-sensing guider, with guide loops closed. The image of the guide star on the detector is shown in the main GUI on the left, showing the 2×2 pattern produced by the Shack-Hartmann mirror.

The guider is not yet fully commissioned: work is needed to refine the active optics control, and overall performance needs to be optimized. Additionally, the design modifications for the IR Nasmyth need to be completed and implemented. Users of the optical Nasmyth instruments should see improvements in performance, with further gains as guiding and active optics algorithms are refined.

First light would not have been possible without the efforts of many people, including (in alphabetical order) Rolando Cantarutti, Nicole David, Manuel Martinez, José Piracés, Priscila Pires, the SOAR day crew, and the La Serena instrument shop and electronic lab, among others. 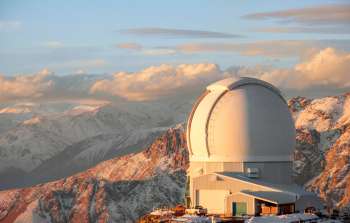 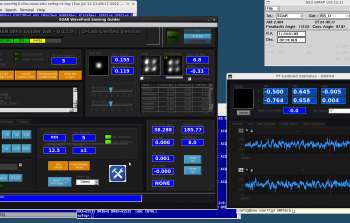