By Kathy Vivas and Alistair Walker

We propose to augment the capabilities of the Dark Energy Camera (DECam) with a new narrow-band filter that is particularly well suited for stellar population studies. The filter, with a central wavelength of 395.2 nm, a bandpass of 10 nm, and a “top hat” transmission profile, will measure metallicities using the Ca II H+K lines. When combined with existing stellar photometry in other DECam passbands, this filter will allow measurements of metallicities down to [Fe/H] ~ –3.5, opening the possibility of unveiling the rare populations of very metal-poor stars in the Milky Way halo and its substructures, and in dwarf galaxies in the Southern Hemisphere. The filter would closely match that available at CFHT and used for the Pristine Survey (Starkenburg et al., 2017, MNRAS, 471, 2587).

Having this filter at DECam will also allow us to do the necessary preparatory work to use it in conjunction with Vera C. Rubin Observatory’s LSST in a few years. Without a doubt, LSST will show new substructures (streams and dwarf galaxies) whose stars may just be too faint, or the structure too extended in the sky, for follow-up at any existing facility in the Southern Hemisphere. A follow-up with DECam will allow us to measure the metallicities in these systems, adding an important ingredient in the understanding of the assembly of the Milky Way.

Industrial-scale spectroscopy for Galactic studies has been recognized as a key area in the 2020 Astro Decadal Survey. This new filter for DECam will allow us to start addressing this goal. Although it won’t replace what medium-resolution spectra can provide for the brighter stars, it has the advantage of providing reliable metallicities for large populations to faint magnitudes across large areas in the Southern Hemisphere in short timescales.

As an example of the capability, the DECam ETC estimates that for 1.2 arcsec images, in dark time, we can go as deep as u(AB) = 22.0 in 600 sec with S/N ~ 25. This depth is good to characterize metallicities of turnoff stars up to ~40 kpc. If we use red giants and/or HB stars, we can obtain metallicities of substructures at distances greater than 150 kpc. The whole Dark Energy Survey (DES) area of 5000 square degrees could be covered to this depth in a ~40-night project.

For NOIRLab to provide such a filter we need community support, and a survey project such as that sketched above requires a dedicated team. We are interested in hearing from those who would be interested in joining a team to carry out such a survey, and also from anyone excited about having such a filter on DECam for future use in support of the LSST. Please email kathy.vivas@noirlab.edu and alistair.walker@noirlab.edu. 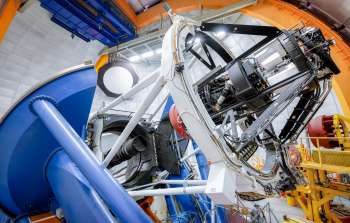