It has been a challenging period for NOIRLab. On Saturday, 11 June 2022, we became aware that the Contreras Fire had started south of the Kitt Peak National Observatory (KPNO). We shared the news with our astronomical community colleagues at the AAS meeting that Wednesday night about the decision to shut down the observatory and evacuate staff. On Thursday, it became apparent that the fire had worsened and that KPNO was in peril. A few key staff remained on-site for a period at the request of the firefighters to assist with local knowledge of the site and its infrastructure.

Overnight and into the early hours of Friday, the fire became unpredictable, and that morning the decision was made to shut off the power. Images taken overnight by webcams showed alarming images of fire at the summit, but we were not able to determine the extent of damage. We held an Emergency Management Team meeting at 9 am and issued a press release before noon. By Friday night, our remaining staff were able to leave the mountain.

On Saturday morning, 19 June, Michelle Edwards, Associate Director of KPNO, and Joe Davis, Safety Manager, were allowed to visit the site to view most structures from a safe distance and take a few photos. The situation was both sobering and encouraging. No astronomical facilities had been destroyed, but there was fire damage to the site, including the loss of three structures — 1 dorm and 1 cabin on the southwest ridge and a small shed located behind the fire barn — and damage to the road. We were able to share this mixed news with our community on Saturday.

Sunday morning the fire teams reported encouraging news that the fire was beginning to be contained and that the structures on the southwest ridge and the north end were protected. Aerial support from the fire teams continued throughout the day.

Sunday through Wednesday 22 June we continued to receive heartening reports of progress containing the fire at KPNO and in the neighboring Tohono O'odham communities. This video shows the progression of the fire from start until containment.

The fire crews started demobilizing from the area around KPNO on 24 June.  Arizona State Route 386 leading up to KPNO remains closed to the public and there is still only limited access to the site for staff for safety reasons. Work has started to restore basic services such as power to the site so that a detailed damage assessment can begin. This is likely to take several weeks.

We will continue to update the press release as needed and hope to soon share the damage assessment with the community. We ask for your patience as there is work to be done first with our funding agencies, governing bodies, and insurance providers.

As an organization, we are indebted to the Eastern Area Incident Management Team for their work to protect Kitt Peak from the fire. We are also indebted to the KPNO staff for their work to protect the telescope optics and instruments in advance of the fire and for sharing their knowledge to assist the fire team with protecting the site. We will soon celebrate the actions of the fire crews that have ensured the continuation of exciting science from KPNO. 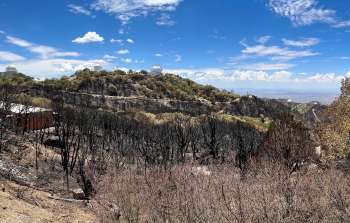