NEWFIRM, a wide-field near-IR Imager, was a facility instrument on the Nicholas U. Mayall 4-meter Telescope at Kitt Peak National Observatory (KPNO) from 2006 to 2010 and 2012 to 2016, and on the Víctor M. Blanco 4-meter Telescope at Cerro Tololo Inter-American Observatory (CTIO) from 2010 to 2011. With the encouragement of our users and the AAAC subcommittee on the futures of the Gemini, Blanco, and SOAR telescopes, we applied to NSF for supplementary funding to move NEWFIRM back to CTIO and refurbish it (see announcement), providing a benefit to Multi-Messenger Astronomy (MMA). NEWFIRM also enables a broad range of other science, including exploiting and supporting the science of Vera C. Rubin Observatory’s LSST. This proposal was successful and NSF awarded us the supplementary funds to return NEWFIRM to CTIO.

Working under COVID-19 restrictions, a small team first extracted NEWFIRM from the Mayall telescope building and moved it to the NOIRLab offices in Tucson, Arizona, where it was carefully packed into six specially constructed large crates. Following truck transport to Los Angeles, the crates were flown to Santiago, Chile, and then by truck transport to Cerro Tololo, arriving on 25 October 2021. During November and early December, the crates were unpacked at Cerro Tololo: the major assemblies (dewar, truss, guider) were mounted on their laboratory carts, and the dewar and guider moved into the Blanco Instrument Laboratory. Initial tests showed an intact rough vacuum on the dewar, and internal mechanisms were successfully tested with no apparent issues. Also in this period, good progress was made with the rewrite of the instrument software, testing of the new detector controller to computer interface card took place, and a detailed optical analysis recommended not changing the Lyot stop.

Near-term activities include more warm mechanism testing, detailed design of the guider upgrade (detectors, software), completion of testing and repair of facility helium lines, continued writing of the instrument software, and preparation for the first off-telescope cool down, scheduled for April 2022. Only then will we be able to test the detectors and the full data system.

Upon the succesful completion of cooling NEWFIRM and lab verification, we plan to perform the first NEWFIRM recommissioning run and checkout in August 2022 at the start of the 2022B semester. After the recommissioning schedule is finalized, we will solicit Science Verification (SV) proposals from our user community and select a few to be executed in October–December 2021. Clearly these dates depend on the performance of the instrument and could easily slip if problems need to be fixed. Updates on the NEWFIRM commissioning schedule can be found on the NEWFIRM webpage or by contacting Sean Points.

Please note that the recommissioning and SV of NEWFIRM may affect the scheduling of proposals requesting f/8 time with COSMOS in 2022B on the Blanco. As a result, there may be very limited time for COSMOS observing in 2022B. Because of the anticipated high demand for NEWFIRM, we expect that COSMOS will be retired at the end of the 2023A semester. Removing the four smaller NEWFIRM crates from the transport truck by forklift after the instrument arrived on Cerro Tololo (November 2021).
Credit: CTIO/NOIRLab/NSF/AURA/A. Walker Mounting the NEWFIRM dewar onto its Lab Cart on the Blanco M floor.
Credit: CTIO/NOIRLab/NSF/AURA/A. Walker 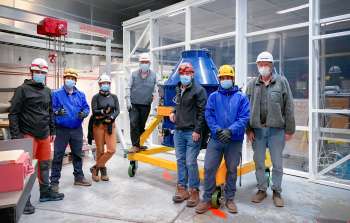 NEWFIRM dewar in the Blanco Instrumentation Lab with the team.