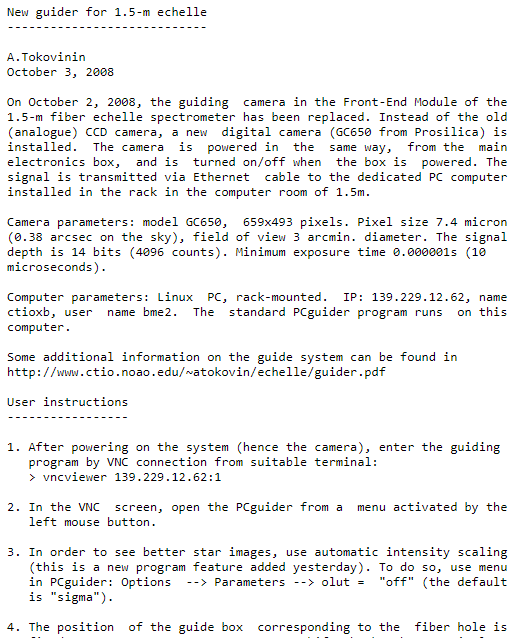 On October 2, 2008, the guiding camera in the Front-End Module of the
1.5-m fiber echelle spectrometer has been replaced. Instead of the old
(analogue) CCD camera, a new digital camera (GC650 from Prosilica) is
installed. The camera is powered in the same way, from the main
electronics box, and is turned on/off when the box is powered. The
signal is transmitted via Ethernet cable to the dedicated PC computer
installed in the rack in the computer room of 1.5m.

Some additional information on the guide system can be found in
http://www.ctio.noao.edu/~atokovin/echelle/guider.pdf

1. After powering on the system (hence the camera), enter the guiding
program by VNC connection from suitable terminal:
> vncviewer 139.229.12.62:1

2. In the VNC screen, open the PCguider from a menu activated by the
left mouse button.

3. In order to see better star images, use automatic intensity scaling
(this is a new program feature added yesterday). To do so, use menu
in PCguider: Options --> Parameters --> olut = "off" (the default
is "sigma").

4. The position of the guide box corresponding to the fiber hole is
fixed: X=289, Y=255. You may want to shift the box by +-1 pixel to
achieve better centering on the hole. The normal box size is 29
pixels. The North-South direction coincides with Y.

6. For better viewing the image, adjust the display using its control
panel (display menu: Options --> Control panel). It is helpful to
adjust contrast and brightness and to use zoom for larger view of
the image in the hole.

7. For focusing the telescope, move the star away from the hole, make
sure that the image is not saturated in the camera (max. count <
4096) and in the display (with bad settings of brightness/contrast,
the central part of the image looks "flat", with right settings it
is peaked).

8. The position of the guider arm must be checked because the GAM
control software systematically goes wrong, so the coordinates of
the guide arm do not match its actual position. The correct
position should be X=-268, Y=+259, Z=-41. Put a bright star away
from the hole, defocus the telescope, and verify that the image is
ring-like, not cut on one side. If this is not the case,
re-initialize the GAM control program and set the GAM probe again
where it should be.