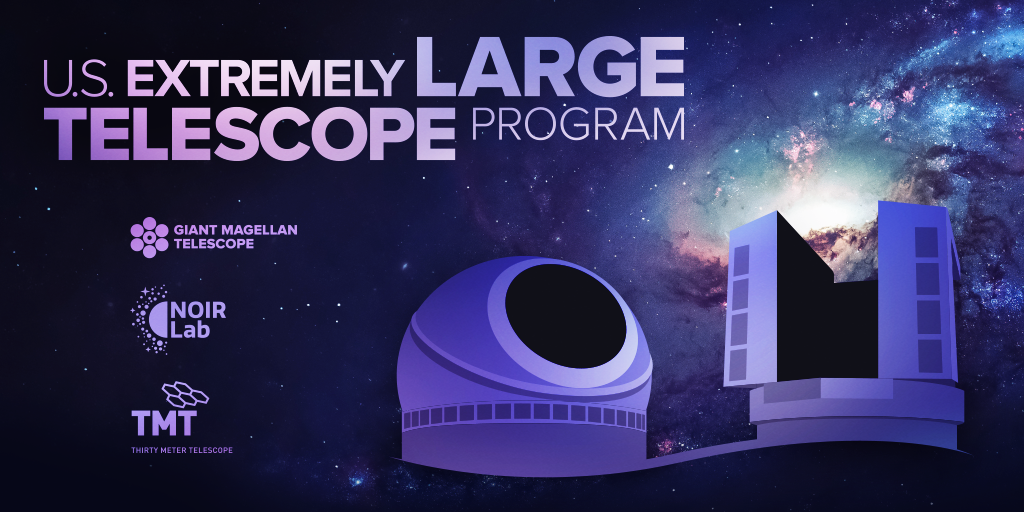 The decadal survey for astronomy and astrophysics is a powerful study that our community uses to drive strategy and vision for the next decade of federally funded transformative science. The 2020 report, Pathways to Discovery in Astronomy and Astrophysics for the 2020s (Astro2020), was published by the National Academies of Science, Engineering, and Medicine on 4 November 2021.

We are honored that the community, via the decadal survey, has ranked the US Extremely Large Telescope Program (US-ELTP) as the highest ground-based priority in Pathways to Discovery.

The US-ELTP’s vision is to provide US-based astronomers with nationally funded all-sky observing access, facilitated by NSF's NOIRLab, to two of the world’s most powerful telescopes now under construction: the Giant Magellan Telescope (GMT) and Thirty Meter Telescope (TMT). The US-ELTP is committed to our goal of realizing both telescopes as a coordinated bi-hemispheric frontier effort.

The report stated that “Participation in the U.S. Extremely Large Telescope (ELT) Program is the highest priority recommendation for ground-based astronomy. ”

Astronomy has a rich history of pushing technological and scientific boundaries, and we are proud to be part of that story. The US-ELTP fully supports the scientific vision of Pathways to Discovery and joins with our community to advocate for its recommendations and its highest prioritized scientific goals: pathways to habitable worlds, new windows on the dynamic Universe, and unveiling the drivers of galaxy growth.

The US-ELTP extends its gratitude to the early supporters, including individuals, foundations, universities, and international organizations, that have endowed the GMT and TMT with resources, funding, expertise, and leadership. Their contributions laid the foundations that have allowed the US-ELTP to bring its vision for the future of astronomy in the next decade and beyond to the US community.

The report says that the combination of the large collecting area and diffraction-limited imaging of the GMT and TMT, "...provides observational capabilities unmatched in space or the ground, and opens an enormous discovery space for new observations and discoveries not yet anticipated."

We are propelled by the promise of scientific discoveries — both those that are planned for and those not yet imagined — which will change humanity’s view of the Universe forever. Astronomers will be able to peer into our dynamic Universe and track the precious elements being created when neutron stars merge. The delicate atmospheres of exoplanets around distant stars will be scrutinized for tell-tale signs of life. As distant galaxies form, high-resolution imaging and spectroscopy will unveil the complicated chemistry, density and motions of the gas and stellar formation. What’s perhaps even more exciting is the multitude of unknown discoveries on the horizon and the questions we don’t even know how to ask; with new telescopes comes new science.

“The recommendations published today are pivotal to the US-ELTP and US astronomy, but I want to emphasize that this is the beginning of a journey,” said Sidney Wolff, the US-ELTP Project Director from NOIRLab. “We understand that there are decision rules built into this recommendation, including that NSF should undertake an external review to evaluate the financial and programmatic viability of both proposed projects.”

A foundational mission of the US-ELTP is to provide all researchers with well supported data archives and robust data services including data pipelines, with NOIRLab well placed as a world leader in large-scale observing access and data archiving. State-of-the-art data access means that discoveries are at the scientists’ fingertips, thereby maximizing the scientific impact of the data and allowing the broadest possible community of scientists to participate in astronomy research.

The US-ELTP supports the recommendation to work with representatives from local communities to define a “Community Astronomy” model of engagement that respects, empowers, and benefits local and Indigenous communities.

The US-ELTP develops and supports programs that broaden participation in science, encourage diversity and inclusion throughout the scientific workforce, and engages with local and Indigenous communities. We will work with community members to continue and enhance our programs in alignment with recommendations of the decadal survey, promote sustainable practices to combat climate change, and coordinate with our partners in the preservation of dark and quiet skies. NOIRLab will continue its leading role in assessing the impacts of satellite constellations on astronomy and on the human experience of the night sky.

We are thankful to the National Academies of Science, Engineering, and Medicine for leading the Pathways to Discovery decadal survey process, and especially the members of the Steering Committee and Panels for contributing their time to this visionary report.

We look forward to joining with the astronomical community in making a significant contribution to the scientific opportunities that lie ahead.