gemini9805 — Organization Release
8.1 Meter Gemini Observatory Mirror Delivered to Mauna Kea
29 Junio 1998: Measuring over 26 feet across, the largest single-piece telescope mirror ever to travel to Mauna Kea arrived safely at its final destination, 13,780 feet above sea level, on Sunday, June 28th. Weighing in at over 25 US tons and encased in a 20-ton steel crate, the mirror took three days to travel from Kawaihae Harbor to the Gemini Observatory site. As one of the widest loads ever transported to the summit, the 28 foot-wide crate required road improvements and even temporary removal of road signs before the mirror could make the final 65-mile journey to its home on the top of Hawai'i.
Leer más 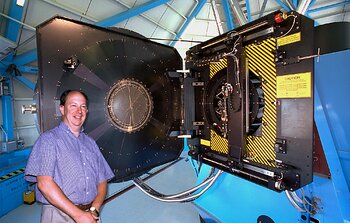 noao9806 — Organization Release
NOAO Astronomer Recognized for Development of Multi-Object Spectrograph
17 Junio 1998: Samuel Barden, National Optical Astronomy Observatories (NOAO) , has been awarded the 1998 Maria and Eric Muhlmann Award of the Astronomical Society of the Pacific . The Muhlmann Award is given for innovative advances in astronomical instrumentation, software, or observational infrastructure that enable significant astronomical discoveries. The award to Dr. Barden recognizes his pioneering use of optical fibers with astronomical spectrometers.
Leer más 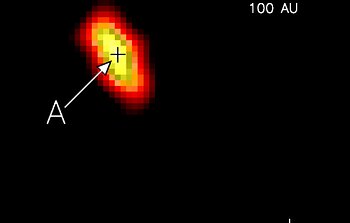 noao9804 — Comunicado científico
Astronomers Discover Possible Planet-Forming Disk
21 Abril 1998: Two teams of astronomers searching for signs of other solar systems with telescopes in Chile and Hawaii have independently discovered a disk around a nearby star that may be forming--or may have already formed--planets.
Leer más 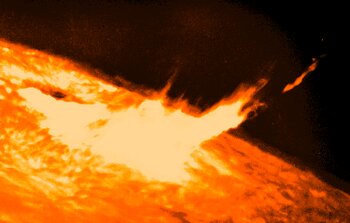 noao9803 — Organization Release
New Solis Telescopes To Investigate Solar Activity
26 Febrero 1998: The National Solar Observatory (NSO) announces the start of SOLIS, a state-of-the-art project to investigate space weather and further our understanding of how changes in the Sun affect the Earth's climate and atmosphere. Can we learn to predict when giant explosions will occur on the Sun? Prediction is important because these explosions, which are called "flares" and "coronal mass ejections", propel high-speed particles toward Earth, disrupting radio communication and causing spectacular auroral displays. Understanding and predicting solar activity such as flares is a major goal of SOLIS. The six-million dollar SOLIS project is funded by the National Science Foundation.
Leer más

gemini9804 — Organization Release
First Gemini 8-meter Mirror is Best of Its Size
18 Febrero 1998: AURA announced today that final polishing of the primary mirror for the northern hemisphere Gemini 8-Meter Telescope has achieved remarkable results. According to Larry Stepp, Gemini Optics Manager, "This mirror is the best mirror of its size ever polished." The Gemini 8-Meter Telescopes Project is an international partnership among the United States, United Kingdom, Canada, Chile, Argentina, and Brazil to build two state-of-the-art 8-meter telescopes--one on Mauna Kea, Hawaii; the other on Cerro Pachon, Chile.
Leer más

gemini9803 — Organization Release
Australia to Share in "Heavenly Twins"
18 Febrero 1998: The Australian Academy of Science today welcomed the announcement by the Minister for Education, Dr. David Kemp, that Australia is to join the International Gemini Project now building two astronomical telescopes for optical and infrared wavelengths in Hawaii and Chile.
Leer más 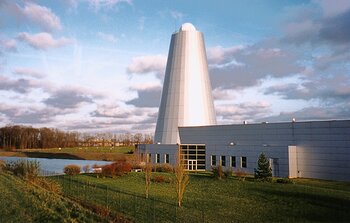 gemini9801 — Organization Release
Acceptance Test Results from first Gemini M1 Mirror
4 Febrero 1998: REOSC Optique has just completed acceptance testing of the first Gemini primary mirror, with excellent results. Larry Stepp witnessed the tests at REOSC from January 12-23, and was impressed by their thoroughness. The Gemini Project has benefited from REOSC's experience with the first three ESO VLT primary mirrors, but the Gemini specifications required additional tests beyond those required by ESO.
Leer más 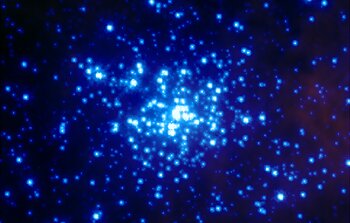 noao9802 — Comunicado científico
Astronomers Identify Most Massive Stars Yet Discovered
7 Enero 1998: Astronomers are announcing today the discovery of an extraordinary number of the most massive stars yet known, all concentrated within a single cloud of gas in a nearby galaxy. A conservative estimate by astronomers Dr. Phil Massey of the National Optical Astronomy Observatories (NOAO) in Tucson, AZ, and Dr. Deidre Hunter from Lowell Observatory in Flagstaff, AZ, places over a dozen stars more massive than 100 times the mass of the Sun within this one cluster. The most massive star may be 150 times the mass of the Sun, making it the most massive star yet found. In addition, the processes that control starbirth in this young, dense star cluster seem to be identical to star formation processes ongoing in more common, less dense star forming regions. The discovery leads astronomers to postulate we haven't yet encountered a physical limit to how massive a star can form in nature.
Leer más

noao9801 — Organization Release
Dr. Richard Dunn Awarded George Ellery Hale Prize
6 Enero 1998: Dr. Richard Dunn, astronomer at the National Solar Observatory (NSO) at Sacramento Peak, New Mexico, has been awarded the prestigious George Ellery Hale Prize in recognition of his "outstanding contributions to the field of solar astronomy over an extended period of time". The Hale Prize will be awarded to Dr. Dunn at the winter meeting of the American Astronomical Society (AAS) in Washington, D.C. on the morning of January 10, 1998. Dr. Dunn is being recognized for "his bold and imaginative innovation of instrumentation for solar physics, his discovery of important new phenomena on the Sun, and the impact of his contributions on solar physicists world wide".
Leer más

gemini9703 — Organization Release
Chile Returns to the Partnership
29 Agosto 1997: Dear Mr. Ramirez: With this message I acknowledge receipt of your e-mail informing the National Science Foundation, as Executive Agency for the Gemini Partnership, that CONICYT has met fully the conditions set by the Gemini Partner agencies for re-entry into the project, and done so within the allowed time.
Leer más

gemini9702 — Organization Release
Groundbreaking for Telescope Base Facility in Hilo
24 Junio 1997: The groundbreaking ceremony for the Gemini North Telescope Base Facility will take place on June 24, 1997 at the University of Hawaii at Hilo University Park. The Base Facility will provide sea level operations support for the 8.1-meter Gemini telescope currently under construction atop Mauna Kea. The announcement of the groundbreaking ceremony was made by Dr. Matt Mountain, Director of the Gemini Project - an international partnership to build twin eight-meter telescopes, one on Mauna Kea, Hawaii and one on Cerro Pachon, Chile.
Leer más

gemini9701 — Organization Release
Corning Ships Second Gemini Mirror Blank
9 Mayo 1997: On May 13, 1997, one of the largest glass objects ever created, the GEMINI II telescope mirror blank, will leave Corning's Canton, N.Y. plant as it makes its way to the port of Ogdensburg for a transatlantic voyage to France for polishing.
Leer más

gemini9601 — Organization Release
Second Gemini Mirror Blank Fused
30 Enero 1996: Fifty-five blocks of low-expansion ULE™ glass were successfully fused together at Corning's Canton, New York facility today to form the second Gemini primary mirror blank. The resulting blank is over 8.1 meters in diameter, 27 cm thick, and weighs approximately 32,000 kg. It is the second of two that Corning is fabricating for the Gemini 8-M Telescopes Project, and comes only three months after the delivery of the first Gemini mirror blank.
Leer más