An international team of astronomers has discovered seven extremely large circumstellar disks silhouetted against the forming stars that they surround. These new disks are 10 to 100 times larger than both our solar system and other planet-forming disks that have been imaged previously, suggesting that it may be possible for planets to form at much larger distances from their stars than previously thought.

The team that made this discovery is led by Richard Elston and Elizabeth Lada of the University of Florida in Gainesville. Team members include University of Florida students and research associates Bruno Ferreira, Joanna Levine, Eric McKenzie, Nick Raines, Noah Rashkind and Carlos Roman-Zuniga, as well as Charles Lada of the Harvard-Smithsonian Center for Astrophysics, Cambridge, MA; Joao Alves of the European Southern Observatory in Garching, Germany; and, August Muench of the SIRTF Science Center, Pasadena, CA. The results were presented today in Nashville at the 202nd meeting of the American Astronomical Society.

As a cloud of molecular gas collapses under the pull of gravity to form a star, it rotates, and the dust, gas and debris gradually coalesce and come together in the shape of a two-dimensional disk. The material in these disks is not only fed to the forming star, but steadily coagulates into bigger and bigger chunks, and finally forms planets. The remnant of this process can be viewed in our own solar system, where the planets all line up, more or less, along the same two-dimensional plane, with all the planets orbiting in the same direction.

Due to the blinding glare of the forming stars, such disks are not normally seen from Earth. However, when the disk lies between Earth and the star—effectively hiding the light from the star—it becomes visible in light scattered by dust. Such nearly edge-on disks have the appearance of a pair of butterfly wings with a dark lane down the middle and are often called silhouette disks, since the dense planet-forming disk is silhouetted against the scattered light from the star.

Elston and Lada found these large disks as part of a major survey for newborn celestial objects in mammoth “molecular clouds” in the constellations Orion and Perseus. These clouds, which contain the raw material for stars and planets, are the largest features of our Milky Way galaxy, stretching hundreds of light-years across. The clouds in this study are located approximately 1,000 light-years from Earth.

The astronomers worked at the National Science Foundation’s 2.1-meter (84-inch) telescope at Kitt Peak National Observatory near Tucson, AZ. They used a near-infrared spectrometer and imager instrument called the Florida Multi-object Imaging Grism Spectrometer (FLAMINGOS), developed by the University of Florida in partnership with Kitt Peak, to take near-infrared images of tens of thousands of stars each night—many more than could have been examined without this new instrument. Such observations must be made in the near-infrared because visible light from young stars is nearly completely absorbed by dust in the molecular clouds, rendering the forming stars invisible optically.

Although the survey relies on invisible infrared light, computers can encode the light in optical wavelengths to create visible images. Most of these “snapshots” revealed only mature stars, and the resulting images appear similar to the sky on a clear night. However, the survey also revealed in several positions, in Elston’s words, “wild places”—startling clusters of infant stars in varied stages of formation. These stars appear in the image as colorful balls of light, with the seven disks resembling dark swaths surrounding each star.

When Lada and Elston measured the disks, they realized they ranged in size from 10 to 100 times larger than any of the handful of similar disks yet seen and imaged, with each disk’s diameter stretching thousands of Astronomical Units (1 AU = 93 million miles, the distance from Earth to the Sun.). The diameter of our solar system, as defined by the most distant planets, is approximately 60 AU. But the disk of our solar system extends beyond the planets to several hundred or even one-thousand Astronomical Units, as traced by the comet-like bodies found in the Kuiper Belt. The fact that these disks extend many times farther than this local comparison suggests that planets, too, could extend well beyond the relatively close proximity observed in our solar system and others.

“That would be good news for astronomers, because planets are notoriously difficult to detect near stars, which swamp their visible light, infrared emissions and other telltale indicators that make the planets detectable,” Elston notes. “So if the more distant reaches of the disk are conducive to planet formation, they will be easier to find once astronmers start looking there,” he said.

Interestingly, these newly discovered silhouette disks are located in several dense clusters composed of hundreds of young forming stars. The fact that the FLAMINGOS survey only found silhouette disks in clusters and not peppered thoughout the immense volume of the molecular clouds supports the point of view that such clusters of stars are the birthplace for most of the stars in our galaxy.

“It’s surprising that these new disks are so large, given that they are found in dense clusters of young stars,” Lada says. “Naively, you would think that the gravitational interactions between such stars would tend to disrupt extremely large disks, since the average distance between the forming stars is only 20,000 Astronomical Units and our largest disks are nearly 10,000 Astronomical Units in diameter.” Silhouette disks that have been found previously by astronomers have generally been located in nearby regions, where a few stars form in relative isolation.

These large disks will require further observations to better define their properties. Imaging with NASA’s Space Infrared Telescope and ground based millimeter-wave radio telescopes will help determine the masses of the disks. High-resolution imaging with the Hubble Space Telescope will help to confirm that these candidate disks are indeed true scattered-light disks, and will better define their geometries.

The FLAMINGOS instrument and the Giant Molecular Cloud Survey are funded by research grants from the National Science Foundation (NSF) to the University of Florida. Kitt Peak National Observatory is part of the National Optical Astronomy Observatory (NOAO) in Tucson, which is operated by the Association of Universities for Research in Astronomy (AURA) Inc., under a cooperative agreement with the NSF. 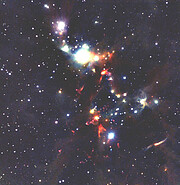 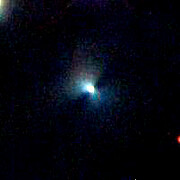