The Dark Energy Survey (DES)  is an international, collaborative effort including Fermi National Accelerator Laboratory (Fermilab), the National Center for Supercomputing Applications (NCSA), and NSF’s NOIRLab. It will map hundreds of millions of galaxies, detect thousands of supernovae, and find patterns of cosmic structure that could reveal the nature of the mysterious dark energy that is accelerating the expansion of our Universe.

According to Einstein’s General Theory of Relativity, gravity should slow the cosmic expansion. Yet, in 1998, two teams of astronomers studying distant supernovae made the remarkable discovery that the expansion of the Universe is speeding up. To explain this cosmic acceleration, cosmologists are faced with two possibilities: either 70% of the Universe exists in an exotic form, now called dark energy, that exhibits a gravitational force opposite to the attractive gravity of ordinary matter, or Einstein’s theory must be replaced by a new theory of gravity on cosmic scales. 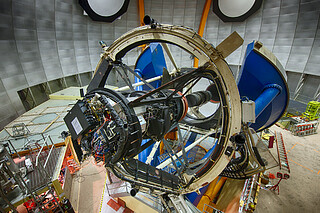 DES is designed to probe the origin of the accelerating Universe and help uncover the nature of dark energy by measuring the 14-billion-year history of cosmic expansion with high precision. More than 400 scientists from over 25 institutions in the United States, Spain, the United Kingdom, Brazil, Germany, Switzerland, and Australia are working on the project. The collaboration built and is using the extremely sensitive 570-Megapixel digital camera, DECam, mounted on the Víctor M. Blanco 4-meter Telescope at Cerro Tololo Inter-American Observatory, high in the Chilean Andes, to carry out the project. DECam has one of the widest fields of view (2.2-degree diameter) available for ground-based optical and infrared imaging. 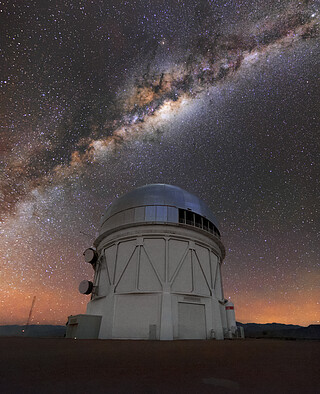 Over six years (2013–2019), the DES collaboration used 758 nights of observation to carry out a deep, wide-area survey to record information from 300 million galaxies that are billions of light-years from Earth. The survey imaged 5000 square degrees of the southern sky in five optical filters to obtain detailed information about each galaxy. A fraction of the survey time is used to observe smaller patches of sky roughly once a week to discover and study thousands of supernovae and other astrophysical transients.

DES comprises two surveys: a wide-area survey and a time-domain survey. The wide-area survey covers a large, contiguous area of sky (5000 square degrees), each part of which is observed ten times in each filter over the course of the survey; the long cumulative exposure time is needed to detect very faint galaxies, and the wide survey area enables us to detect a very large number of them. The time-domain survey covers a smaller area on the sky (27 square degrees), but exposures are repeated a large number of times at regular, six-night intervals over the course of the survey.