Part of Kitt Peak National Observatory. The Nicholas U. Mayall 4-meter Telescope stands prominently on the highest ridge. This telescope hosts the Dark Energy Spectroscopic Instrument (DESI) which measures the effect of dark energy on the expansion of the Universe.

Tucson, Arizona is host to NOIRLab’s Headquarters, and Kitt Peak National Observatory (KPNO) is located on Tohono O'odham Nation land less than an hour’s drive from Tucson. A lease with the Tohono O'odham Nation allows for KPNO operations where over 20 facilities perform cutting edge astronomical research. In 1958, Kitt Peak was selected as the site for the national ground-based optical observatory, and from 1984 until 2019, the facilities were run by the National Optical Astronomy Observatory (NOAO). KPNO is now a Program of NSF's NOIRLab. 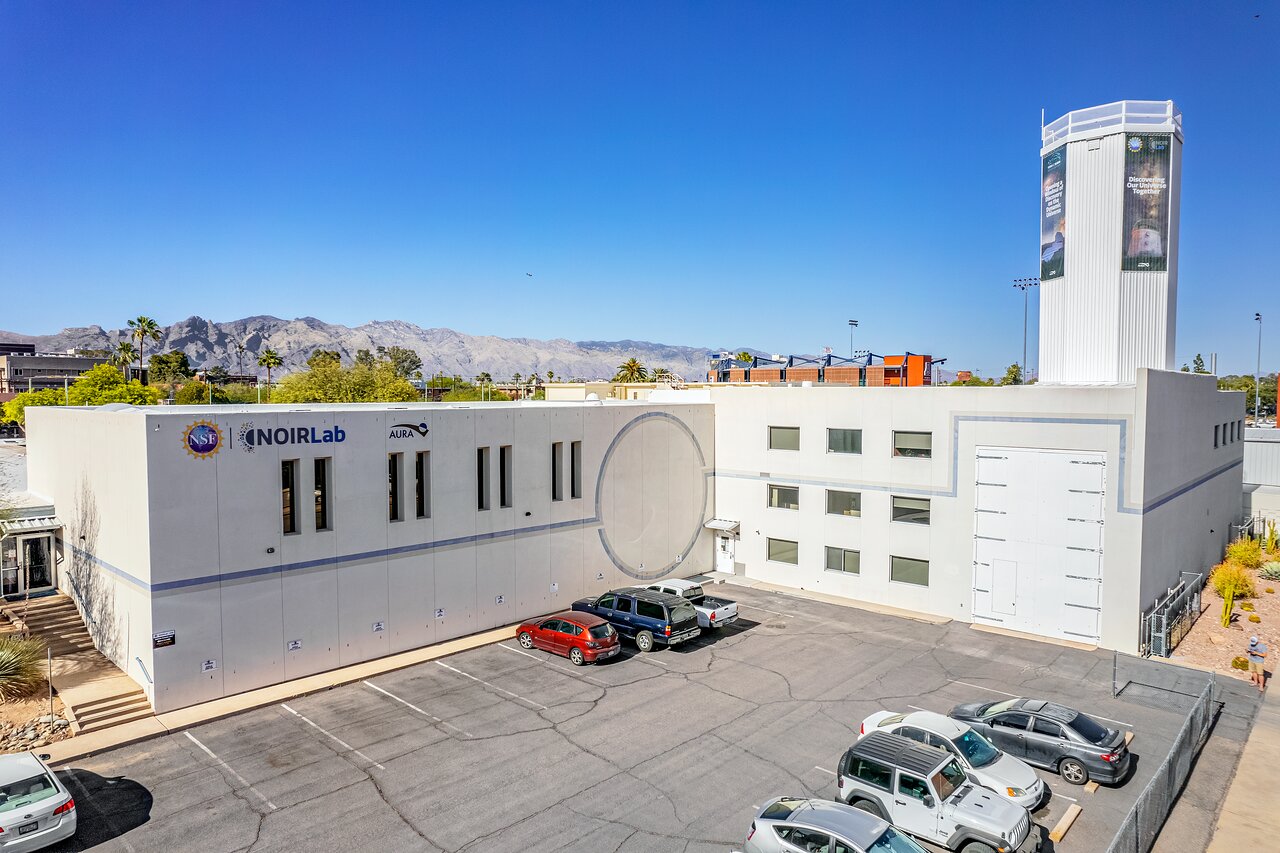 View of NOIRLab Headquarters, formerly the headquarters of National Optical Astronomy Observatory (NOAO). The HQ is on Cherry Avenue, just across the road from the University of Arizona and the Steward Observatory building.

Maintaining a good relationship with the Tohono O'odham Nation is significant for NOIRLab, and support for multiple educational and engagement programs continues. With changing perspectives and attitudes toward the respectful use of Indigenous lands (especially among youth), new approaches to educational/engagement programming are constantly being adopted. These new approaches emphasize the need for assessments to ensure that NOIRLab positively impacts local learners, teachers, and families in ways that address necessities identified by careful listening and personal interactions. Additionally, an emphasis on the rich culture and history of the Tohono O'odham Nation is integrated into NOIRLab programming whenever possible. In doing so, NOIRLab can work towards strengthening meaningful connections between neighboring communities while promoting the consideration of diverse cultures. 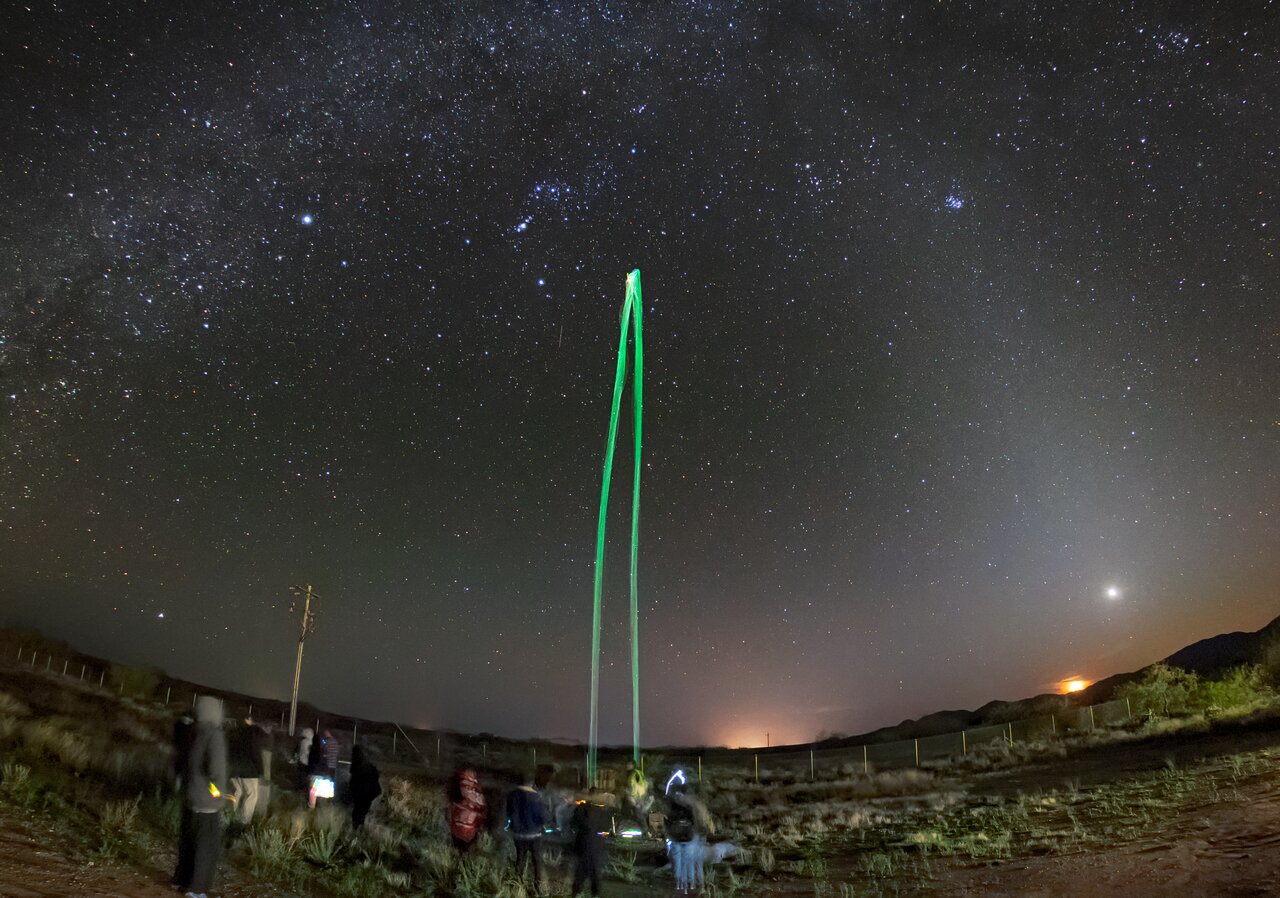 NSF’s NOIRLab staff frequently partner with the American Indian Science and Engineering Students (AISES) chapter at Tohono O'odham Community College to host stargazing events and other local engagement activities. One popular activity is for students to build and launch water rockets out of two-liter bottles with glow sticks attached to make the flights visible against the dark Arizona skies. This image shows the trajectory of a launch that reaches its apex near the constellation of Orion.

At all NOIRLab sites, being positive stewards of the land and sky is critical. In order to make meaningful observations of the universe, it is vital to maintain a dark sky whenever possible. Many cities unfortunately face issues with overlit urban areas during nighttime and the use of moderate LED lighting, leading to inevitable repercussions to local ecosystems and nocturnal wildlife. The popular citizen science light pollution program Globe at Night originated at KPNO and continues to build awareness of light pollution issues, ranging from its impact on wildlife to energy conservation and the local economy. 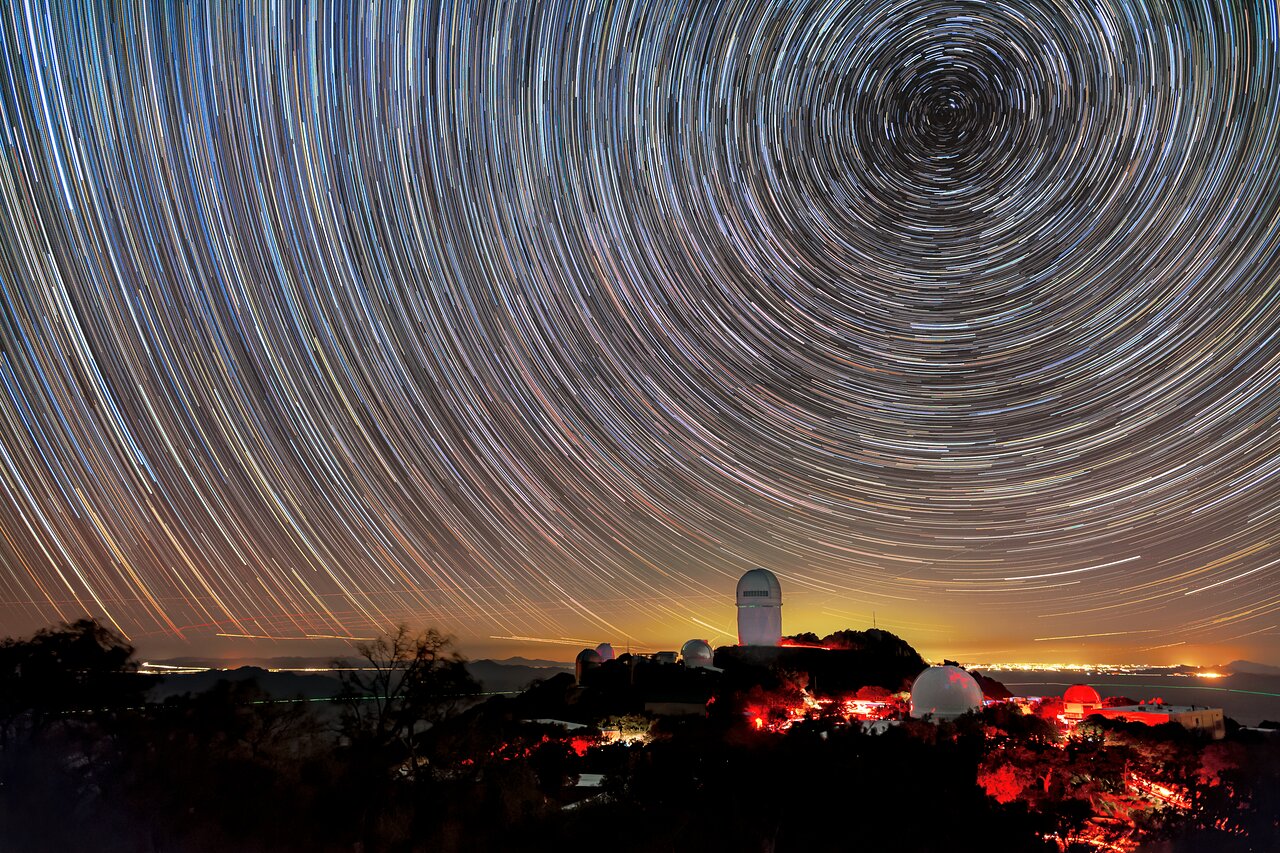 Nighttime view of KPNO. The yellow glow on the horizon comes from Tucson, Arizona, about 90 kilometers (55 miles) to the northeast. Over the past decade, light pollution like this has increased by 2% a year from many medium-sized and larger cities.

In a normal year, more than 16,000 tourists and students from Arizona and out of state visit KPNO's Visitor Center to learn about science and technology in an environmentally responsible manner.

NOIRLab, in Tucson and at KPNO, employs approximately 250 staff based in Arizona out of a total of 450, and the organization contributes significantly to the region’s economy (see e.g. this 2008 study of economic impact on Arizona from astronomy and space sciences).

NOIRLab is operated by the Association of Universities for Research in Astronomy (AURA). AURA’s role is to establish, nurture, and promote public observatories and facilities that advance innovative astronomical research. In addition, AURA is deeply committed to public and educational outreach, and to diversity throughout the astronomical and scientific workforce.