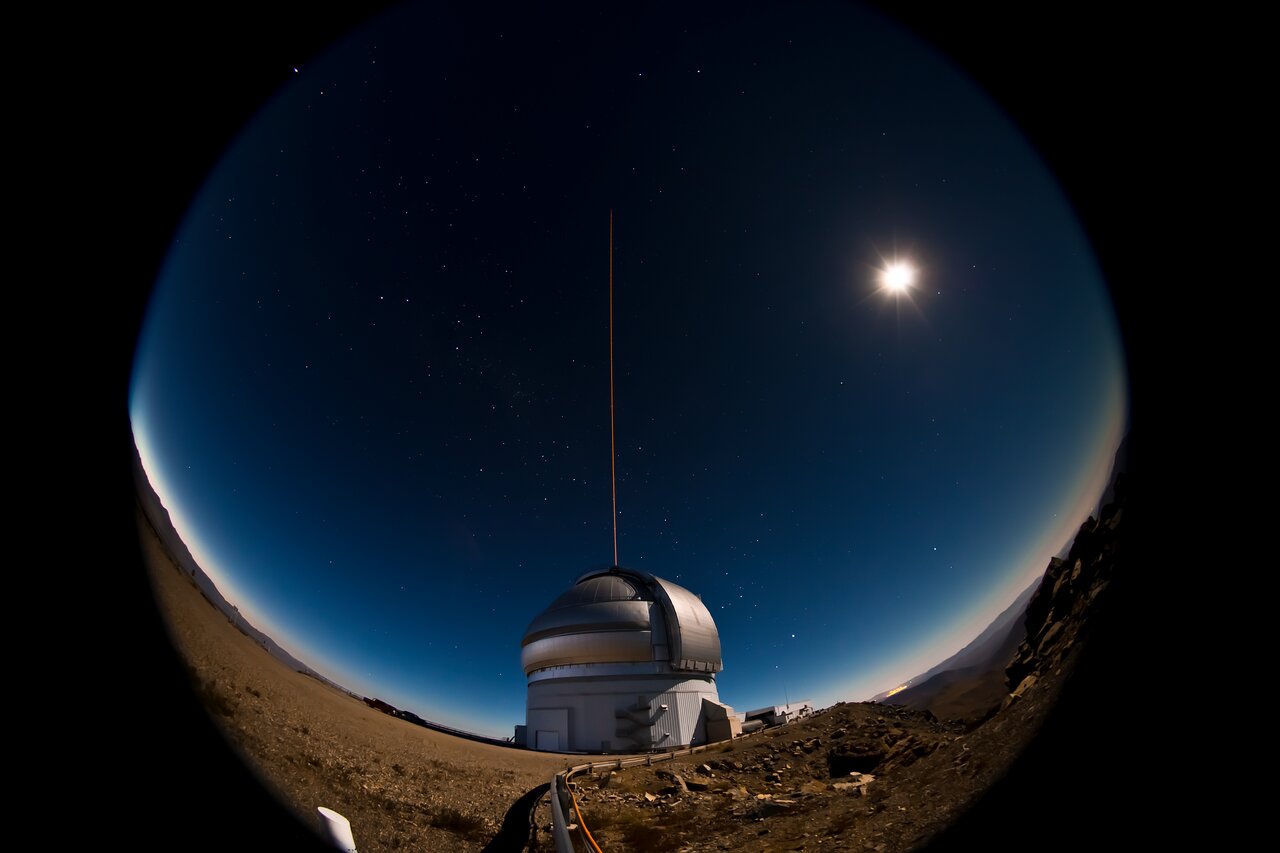 The Gemini South telescope on the night of January 21–22, 2011 when the GeMS laser guide star system first shone into the sky.

Description of the Instrument

GeMs is the Gemini Multi-Conjugate Adaptive Optics System. It uses a series of deformable optics to correct for the atmospheric distortion which blurs images of stars, galaxies, and other celestial objects.

GeMs delivers a uniform, diffraction-limited image quality at near-infrared (NIR) wavelengths over an extended field of view of 2 arcminutes. This corrected beam then feeds the latest generation of science instruments: GSAOI or Flamingos 2.

GeMs is composed of three subsystems: a set of laser guide stars, the Beam Transfer Optics (BTO) and the adaptive optics bench, known as CANOPUS.

The five laser guide stars excite sodium atoms in Earth’s upper atmosphere to  create artificial beacons in an X pattern so sensors can correctly adjust the adaptive optics. The BTO manages the propagation of light from the laser located on the side platform of the telescope to the small projecting telescope, located behind the secondary mirror M2. It also ensures that the single beam from the laser is equally divided into the five beams required for the CANOPUS correction.

The CANOPUS bench, located at the telescope port, analyses the light from the five beacons. Based on this information, it provides compensation instructions in real time to its deformable mirrors, moving them up to 800 times a second. CANOPUS also can be configured to use a natural guide star, which can provide slightly sharper images, albeit over a smaller field. The artificial beacons do, however, have one flaw: they're not very sensitive to the large-scale movement (called tip-tilt) of the image induced by the atmospheric turbulence. This missing information is instead provided by a dedicated sensor located in CANOPUS, which can provide the tip-tilt information using faint natural stars in the field of view.

The natural guide star technique is limited, however, as not every patch of sky has a bright enough star for Gemini’s Natural Guide Star Next Generation Sensor (NGS2) system to use. Only about half of the night sky as seen from Gemini South can be covered by the NGS2 system. 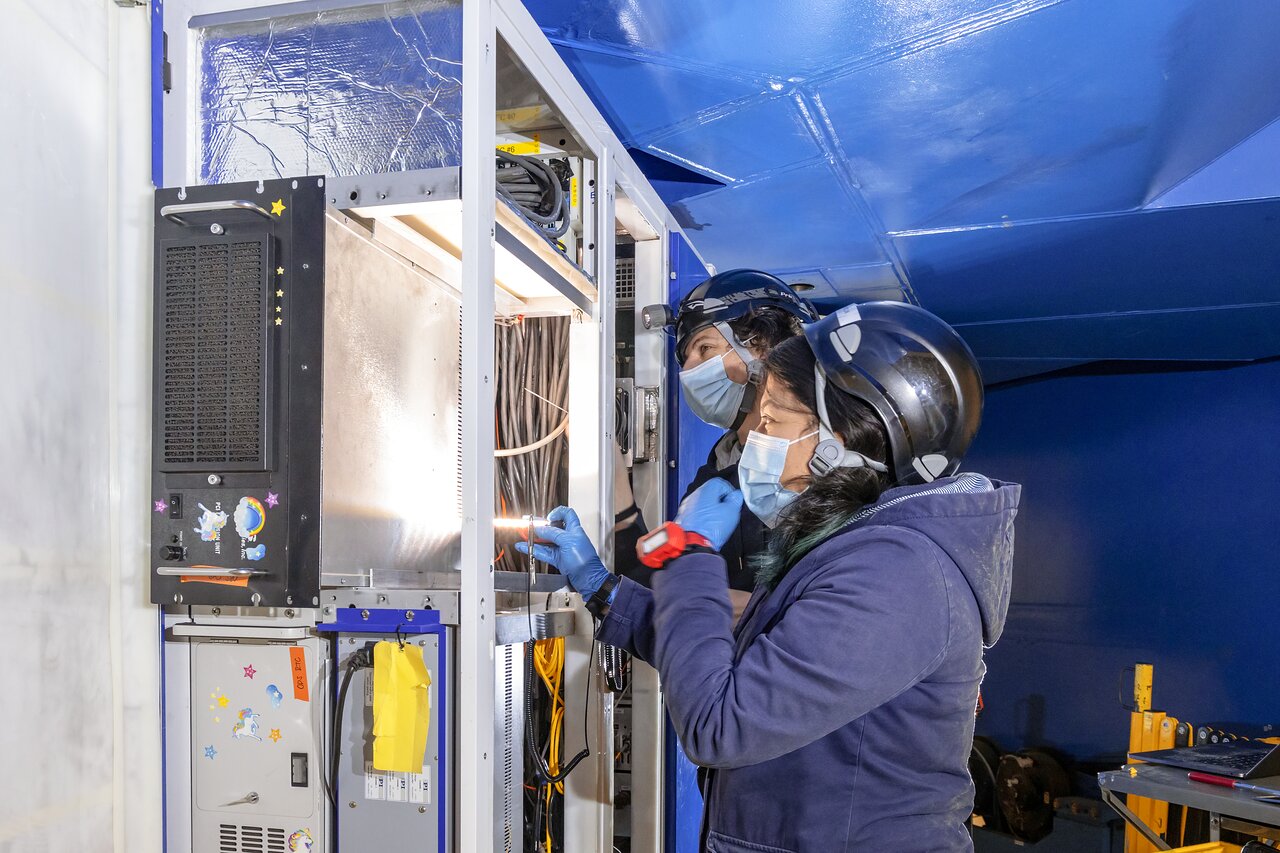 CANOPUS, the optical bench of the Gemini Multi-Conjugate Adaptive Optics System (GeMS), during a shutdown maintenance process in the lab of the Gemini South telescope in Chile.

The Natural Guide Star Wave Front Sensor (NGS WFS) unit on CANOPUS was replaced by a new guiding unit called Natural Guide Star Next Generation Sensor (NGSNGS or NGS2). NGS2 allows the system to use significantly dimmer guide stars and can sense stars 2 magnitudes fainter stars than the previous unit which greatly improves the quality of correction for the brighter stars and allows CANOPUS to observe more of the sky using the faint guide stars. Like the original system, NGS2 can acquire between one and three guide stars. The choice is constrained by the availability of such stars in the field observed, so Gemini South now has more options for the selection of natural guide stars and thus a greater overall usable area of sky in this mode of operation. 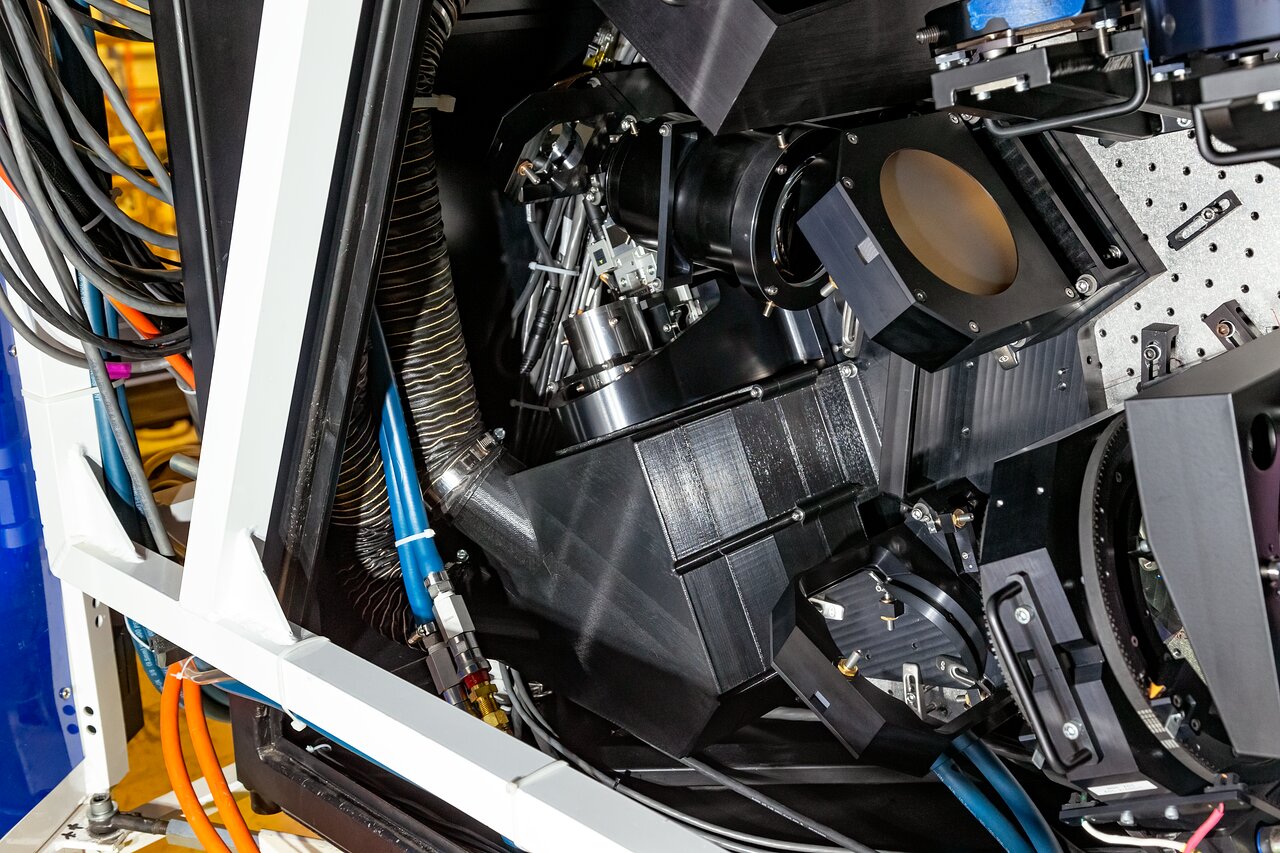