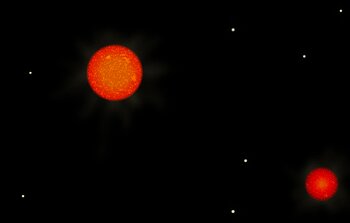 noao0615 — Science Release
Twenty New Stars in the Neighborhood
14 November 2006: Astronomers have identified 20 new stellar systems in our local solar neighborhood, including the twenty-third and twenty-fourth closest stars to the Sun. When added to eight other systems announced by this team and six by other groups since 2000, the known population of the Milky Way galaxy within 33 light-years (10 parsecs) of Earth has grown by 16 percent in just the past six years.
Read more 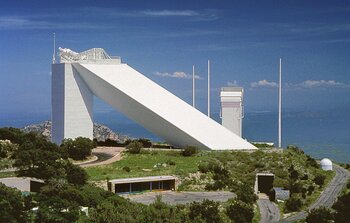 noao0613 — Organization Release
Watch Mercury Transit the Sun on November 8 Live from Kitt Peak National Observatory
26 October 2006: The National Science Foundation’s Kitt Peak National Observatory and the Exploratorium are joining forces to present a live view of an unusual celestial event: the transit of planet Mercury across the face of the Sun, as seen from Earth.
Read more 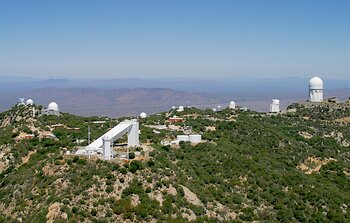 noao0612 — Organization Release
New Transportation Service to Kitt Peak: Adobe Shuttle of Tucson to Provide Shuttle To/From Kitt Peak
14 September 2006: Kitt Peak National Observatory boasts the greatest number of research telescopes on one mountain anywhere in the world. In addition to the twenty-five optical and two radio telescopes, Kitt Peak also offers an attractive visitor center complete with exhibits, and a gift shop, daily telescope tours, and world-renowned nightly public observing programs by reservation. However, until now, there was no shuttle transportation available for those people who would prefer not driving up the winding mountain road to the observatory.
Read more 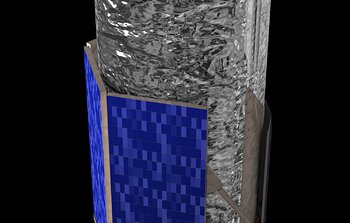 noao0611 — Organization Release
NASA Funds Development of Destiny
3 August 2006: A team led by the National Optical Astronomy Observatory (NOAO) and NASA’s Goddard Space Flight Center has been selected by NASA to develop a concept for a space mission to characterize the mysterious “Dark Energy” that permeates the Universe and causes its expansion to accelerate.
Read more

noao0610 — Science Release
Discovery of the Nearest L Dwarf
1 August 2006: As part of an ongoing search for Earth’s nearest stellar neighbors, astronomers have determined the distance to a stellar-like body known as DEN 0255-477 and discovered that it is the nearest-known L dwarf. This body is now also the faintest object outside our solar system for which its intrinsic visual brightness has been measured.
Read more 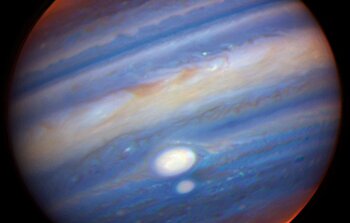 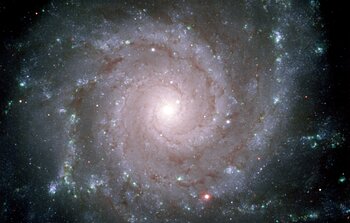 gemini0607 — Science Release
The Early Universe Is Dusty, And Astronomers Finally Know Why
8 June 2006: Massive star supernovae have been major "dust factories" ever since the first generations of stars formed several hundred million years after the Big Bang, according to an international study to be published in Science magazine on July 14, 2006.
Read more 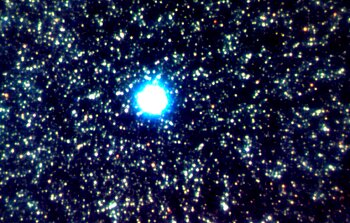 gemini0606 — Science Release
Gemini Probes The Center Of Andromeda Galaxy With Unprecedented Clarity
5 June 2006: These results were announced by two teams of researchers during a press conference at the meeting that also included the release of new images of the entire span of M31 obtained with the Spitzer Space Telescope. The Gemini teams included Canadian researcher Tim Davidge (NRC, Herzberg Institute of Astrophysics, Victoria BC) and Knut Olsen of the National Optical Astronomy Observatory (NOAO). The new data about individual stars in M31 obtained with the Gemini North Telescope on Mauna Kea, Hawaii, demonstrate dramatically the complementarity of ground-based telescopes, which can record images with unprecedented spatial resolution, and space-based facilities, which have higher sensitivity.
Read more 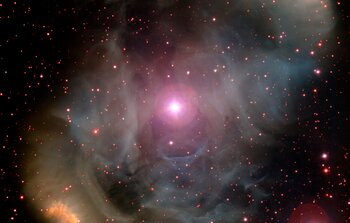 gemini0605 — Science Release
A Tale of Two Nebulae
4 June 2006: Two new images from Gemini Observatory released today at the American Astronomical Society meeting in Calgary, Canada, show a pair of beautiful nebulae that were created by two very different types of stars at what may be similar points in their evolutionary timelines. One is a rare type of very massive spectral-type "O" star surrounded by material it ejected in an explosive event earlier in its life. It continues to lose mass in a steady "stellar wind." The other is a star originally more similar to our Sun that has lost its outer envelope following a "red giant" phase. It continues to lose mass via a stellar wind as it dies, forming a planetary nebula. The images were made using the Gemini Multi-Object Spectrograph (GMOS) on Gemini South as part of the Gemini Legacy Imaging program.
Read more 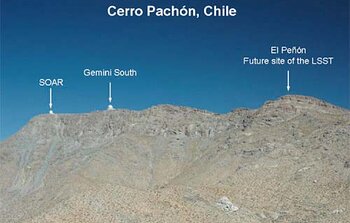 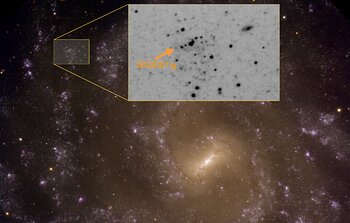 gemini0604 — Science Release
Companion Explains "Chameleon" Supernova
3 May 2006: Using the Gemini South telescope in Chile, Australian astronomers have found a predicted "companion" star left behind when its partner exploded as a very unusual supernova. The presence of the companion explains why the supernova, which started off looking like one kind of exploding star, seemed to change its identity after a few weeks.
Read more 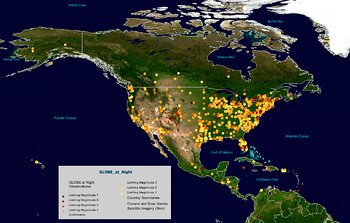 noao0609 — Organization Release
GLOBE at Night Reaches More Than 18,000 Participants on Six Continents
24 April 2006: More than 18,000 citizen-scientists in 96 countries submitted 4,591 observations of the darkness of their local night skies during the 10-day GLOBE at Night event last month.
Read more 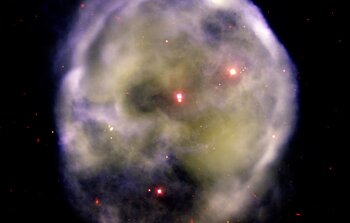 gemini0603 — Science Release
Gemini Images a "Shocking" Skull of Gas
7 April 2006: A new Gemini Observatory image of NGC 246, nicknamed the "Skull Nebula," shows what can happen as the outer atmosphere of a fast-moving, dying star like the Sun (in several billion years) pushes through the complex soufflé of gas and dust that lies between the stars of our galaxy.
Read more 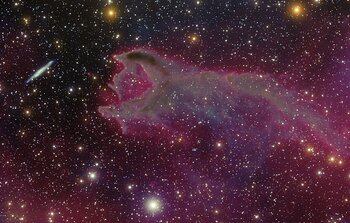 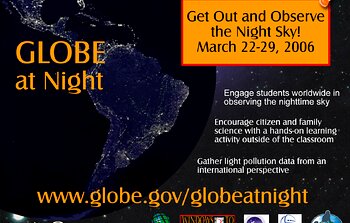 noao0607 — Organization Release
Go Star Hunting with the “GLOBE at Night” Program—March 22- 29
2 March 2006: What does it mean to REALLY see the stars? When you look at the night sky, are you awed by an endless swath of glittering jewels set against a deep velvet-black sky? Or do you see only a dozen or so pinpricks of light doggedly shining through the soft amber glow of streetlamps? How can light “pollution” make such a difference in the way the sky looks?
Read more 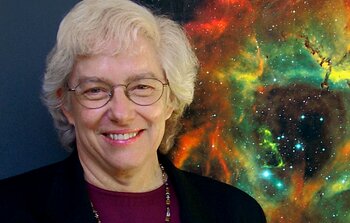 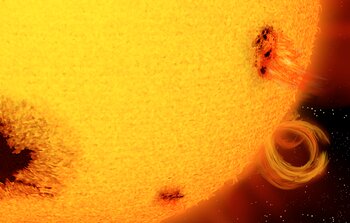 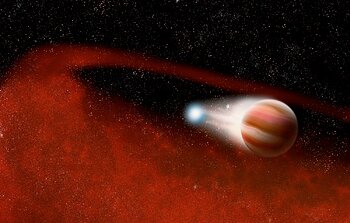 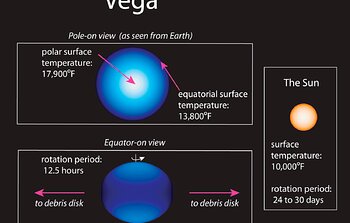 noao0603 — Science Release
Rapidly Spinning Star Vega has Cool Dark Equator
10 January 2006: Strong darkening observed around the equator of Vega suggests that the fifth brightest star in Earth’s sky has a huge temperature difference of 4,000 degrees Fahrenheit from its cool equatorial region to its hot poles.
Read more
Showing 1 to 20 of 24
Usage of NOIRLab Images and Videos
Are you a journalist? Subscribe to the NOIRLab Media Newsletter.