A high-resolution image released today by the Gemini Observatory shows Jupiter's two giant red spots brushing past one another in the planet's southern hemisphere.

The image was obtained in near-infrared light using adaptive optics which corrects, in real-time, for most of the distortions caused by turbulence in Earth's atmosphere. The result is a view from the ground that rivals images from space.

In the near-infrared, the red spots appear white rather than the reddish hue seen at visible wavelengths.

"It was tricky getting this image," said Gemini astronomer Chad Trujillo who helped lead the effort to capture the event. "Since we used adaptive optics we needed a star-like object nearby to guide on, so we had to find a time when Jupiter's moon Io would appear close enough to Jupiter and the red spots would be optimally placed on Jupiter's disk. Fortunately it all worked out on the evening of July 13th and we were able to capture this relatively rare set of circumstances," said Trujillo.

Red Spot Junior is roughly half the size of its famous cousin, but its winds blow just as strong. This mighty new storm formed between 1998 and 2000 from the merger of three long-enduring white ovals, each a similar storm system at a smaller scale, which had been observed for at least 60 years. But it was not until February 27th of this year that Philippine amateur astronomer Christopher Go discovered that the color of the newly formed white oval had turned brick red. Astronomers were witnessing the birth of a new red spot.

No one is certain why this white oval turned red. However, University of Hawai'i astronomer Toby Owen supports a hypothesis developed by New Mexico State University astronomer Reta Beebe, who suggests that the merger of the three white ovals led to an intensified storm system. This made it strong enough to dredge up reddish material from deeper in the atmosphere. As this material welled up in the middle of the spot, it is contained (or protected) from escape by the strong circulating currents at the spot's edges. "What's frustrating is that we don't know what this reddish material is," Owen said. "But it appears that the ability to dredge it up depends on the size of these oval storm systems."

Another popular hypothesis contends that the material dredged up from below Jupiter's visible clouds climbs to an altitude where the Sun's ultraviolet light chemically alters it to give it a reddish hue.

Each red spot is rotating with Jupiter at slightly different rates and over time, like passing cars on a highway, the two spots change relative positions causing periodic close passages like this. However, this is the first such passage since the new, smaller red spot intensified and turned red. A recent optical image from the Hubble Space Telescope was obtained in April of this year when the two spots were still separated by a considerable distance.

The Gemini image was produced by Travis Rector of the University of Alaska Anchorage, Chad Trujillo of Gemini Observatory and the Gemini ALTAIR adaptive optics team.

The Great Red Spot is truly enormous. Its size ranges from about 25,000 to 40,000 kilometers (15,500 to 25,000 miles) in its longest dimension (large enough to contain two to three Earths) and packs wind speeds of 560 kilometers/hour (350 miles/hour). Unlike hurricanes on Earth, which can dissipate over land in a matter of days, Jupiter's Great Red Spot is a product of strong convection currents that violently swirl gases in that region of the planet's atmosphere. It has probably persisted for centuries. First definitely recognized in 1879, the Great Red Spot appears identical to the "Permanent Spot" recorded on Jupiter in 1665 by Jean-Dominique Cassini I (1625-1712) in Italy and may be related to a spot noted by British observer Robert Hooke (1635-1703) in 1664. If so, the Great Red Spot has endured for at least 350 years. Jupiter has no solid surface that would deprive the storm of its condensing "fuel."

The formation of a new red spot on Jupiter, however, may also indicate a climate change on the planet. A recent study by Amy Simon-Miller (NASA-Goddard Space Flight Center) and Imke de Pater and Philip Marcus (University of California, Berkeley) shows that Red Spot Junior is gaining altitude. This indicates a temperature increase in that region. Marcus says that the relatively uniform temperature of Jupiter, where the temperatures at the poles are nearly the same as they are at the equator, is due to the chaotic mixing of heat and airflow from vortices in the planet's atmosphere. But Marcus predicted that the movement of heat from Jupiter's equator to its south pole would nearly shut off at 34˚ southern latitude. This is the same latitude where Red Spot Junior is located. This region may now be acting like a barrier that prevents the mixing of heat and airflow. If it is, Jupiter's equatorial regions will become warmer and its poles will become cooler. Consequently, the planet's average temperature at some latitudes could change by as much as 5.5 degrees Celsius (10 degrees Fahrenheit). 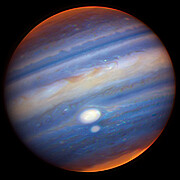 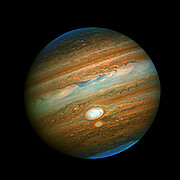