NEID is a radial velocity instrument designed to measure the motion of nearby stars with extreme precision mounted on the 3.5-meter WIYN Telescope at Kitt Peak National Observatory. NEID is pronounced NUH-eed or NOO-id (rhymes with “fluid”) and takes its name from the Tohono O'odham word meaning “to see". The instrument is funded by the joint NASA/NSF Exoplanet Exploration Program (or NN-EXPLORE, which also funds the use of Chiron spectrometer on the SMARTS 1.5-meter Telescope at CTIO and Zorro on Gemini South, 'Alopeke on Gemini North, NESSI on the WIYN 3.5-meter Telescope) and had First Light in 2020. For a one-page summary of NEID, see this handout.

NEID consists of two principal parts. The port adaptor (built at the University of Wisconsin-Madison) is mounted on the Bent Cassegrain port at WIYN. It is used to acquire and guide on a target star, precisely maintaining the stellar centroid on a science fiber in the focal plane. Other nearby fibers gather simultaneous light from the sky. Calibration light can also be sent to NEID via the port adaptor. The fibers feed their light to a new spectrograph room built by WIYN on the ground floor of the observatory. The room ensures a stable environment for the spectrograph. The NEID spectrograph was built by Penn State University (Suvrath Mahadevan, PI). It is sealed in a vacuum chamber to maintain the optics at a stable temperature (with variations less than 1/1000th of a degree C) and isolated from outside disturbances. 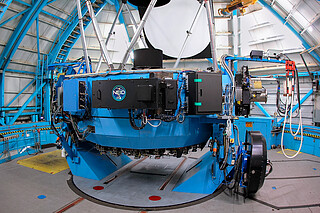 The NEID port adaptor on the 3.5-meter WIYN Telescope.

Current radial velocity instruments can measure speeds as low as 3.5 kilometers per hour (just over 2 miles per hour: a slow walking pace), but NEID was built to detect even lower speeds, down to 1 kilometer per hour — potentially uncovering Earth-mass exoplanets. 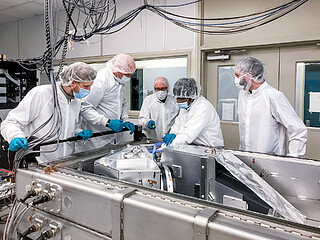 The NEID spectrograph, when it was being built at Penn State.