An artist’s rendition shows a planet orbiting a very young, active star pocked with dark star spots and speckled with flares and other surface activity.

A team led by a University of Florida astronomer announced on Wednesday the discovery of the planet orbiting a star just 600 million years old, one of the youngest stars ever found with a planetary companion. In a development expected to dramatically speed the hunt for planets in coming years, the astronomers used a new, more effective planet-finding instrument attached to a telescope at the Tucson-based Kitt Peak National Observatory to find the planet, located about 100 light years away in the constellation Virgo. 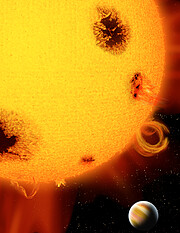