The Early Universe Is Dusty, And Astronomers Finally Know Why

Massive star supernovae have been major "dust factories" ever since the first generations of stars formed several hundred million years after the Big Bang, according to an international study to be published in Science magazine on July 14, 2006.

The scientific team trained their telescopes on Supernova 2003gd, which exploded in the spiral galaxy NGC 628 located about 30 million light-years from Earth. The light from the 2003gd first reached Earth on March 17, 2003. At its brightest, it could be seen in an amateur astronomer's telescope. While many supernovae are discovered each year, this particular one stood out because it was relatively nearby and could be followed for a long-than-usual time by the specialized infrared detectors of the Spitzer Space Telescope, and by an optical spectrograph on the Gemini North telescope.

"2003gd is, quite literally, the smoking gun," says Doug Welch, professor, physics & astronomy at McMaster University, and one of 17 astronomers involved in the study. "These carbon and silicon dust particles which form from the supernovae blast make possible the many generations of high-mass stars and all the heavy elements they produce. These are elements which make up the bulk of everything around us on Earth, including you and me."

In August 2004, Welch and co-author Geoff Clayton of Louisiana State University, visited the Gemini North telescope in Hawaii to take optical spectra, with the Gemini Multi-object Spectrograph (GMOS), of ancient massive star supernovae in their hunt for the formation of dust.

Making space dust requires elements heavier than hydrogen and helium - the only elements in existence after the Big Bang. Once dust is available stars form much more quickly and efficiently. Up until now, the efficiency and rapidity of the creation of dust by massive star supernovae has been unknown.

"We have finally shown that supernovae could have been major contributors to the dust present in the early Universe," said Ben Sugerman, of the Space Telescope Science Institute in Baltimore, MD. "Until now, the available evidence has pointed to the contrary."

Supernovae expand and dissipate into space quickly, so scientists require extremely sensitive telescopes to study them even a few months after the initial explosion. Dust does not begin to form until two years after an explosion, so while astronomers have suspected that most supernovae do produce dust, their ability to confirm this stellar dust production in the past was limited by the available technology.

The study utilized Hubble Space Telescope data as well as new observations from the Spitzer Space Telescope (currently trailing the Earth along its orbit) and the Gemini North telescope of the Gemini Observatory on Mauna Kea, Hawai'i.

"This work demonstrates the enormous value of working in different parts of the spectrum and the critical need for both ground-based and space-based facilities," says Welch.

Funding for the research was provided in part by the Natural Sciences and Engineering Research Council. Canada's participation in the Gemini Observatory is funded by the National Research Council of Canada's Herzberg Institute for Astrophysics. The Gemini Observatory consists of twin 8-meter telescopes in Hawai'i and Chile funded by an international partnership that includes: US, UK, Canada, Australia, Brazil, Argentina and Chile.

McMaster University, a world-renowned, research-intensive university, fosters a culture of innovation, and a commitment to discovery and learning in teaching, research and scholarship. Based in Hamilton, the University, one of only four Canadian universities to be listed on the Top 100 universities in the world, has a student population of more than 23,000, and an alumni population of more than 115,000 in 128 countries. 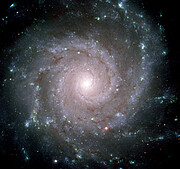 PR Video gemini0607a
The Early Universe Is Dusty, And Astronomers Finally Know Why