A new Gemini Observatory image of NGC 246, nicknamed the "Skull Nebula," shows what can happen as the outer atmosphere of a fast-moving, dying star like the Sun (in several billion years) pushes through the complex soufflé of gas and dust that lies between the stars of our galaxy.

NGC 246 is a planetary nebula that lies about 1,600 light-years away in the constellation Cetus. Its central star shines at 12th magnitude and is whisking through space at about 80 kilometers (50 miles) per second.

Astronomers have known since 1969 that a planetary nebula interacts with the interstellar medium as it expands. For NGC 246, this means that the rapidly moving gases on the nebula's leading edge (which shares the central star's direction of motion) slow down and compress as they collide with the interstellar medium. Meanwhile, gas clouds on the shell's trailing edge continue to expand freely.

The complex braided structure of NGC 246's blue outer ring is most likely due to the action of shock waves. As the compressed outer shell piles up against the interstellar medium like plowed snow on a roadway, it heats up and becomes unstable. The ring starts to fray and fragment. High-velocity gases pushing outward from the hot (~200,000 degrees K) central star may also contribute to the visible chaos. Collisions between these fast winds and the shocked shell could explain the distinctive green lobes and darker voids visible in the leading half of NGC 246's interior shell.

The unequal expansion along the nebula's major axis should result in a visible asymmetry. As this highly detailed Gemini image shows, NGC 246's outer structure is indeed shaped like an oval ring. Its leading (top) edge appears brighter and sharper than its trailing (bottom) edge. The “central” binary star is slightly displaced toward the shell’s leading edge, as astronomers predicted. (For more details on the dynamics of planetary nebulae, and this object in particular, see the papers by Muthu et al. and Soker et al.)

The star at the heart of NGC 246 is part of a binary pair. The primary star is highly evolved, having exhausted all of its nuclear fuel. This star has become a white dwarf with a radius only a fraction of its original size (typically about the size of the earth). Aside from NGC 246’s central binary star, several other conspicuous stars and some distant galaxies appear superimposed on the gas shell; still others lie just beyond the nebula’s confines.

Discovered by German-born English astronomer William Herschel in 1785, NGC 246 is located a little more than 6˚ north-northeast of 2nd-magnitude Beta (β) Ceti and about 1.5˚ south-southeast of 4.8-magnitude Phi1 (ψ1) Ceti.

The nebula is relatively small (4.6’ x 4.1’) and dim (11th-magnitude). In a small telescope the nebula’s feeble light is almost overpowered by the “cluster” of stars superimposed on it. Larger telescopes will show the nebula more clearly, especially with an oxygen III filter. NGC 246’s central star is worth monitoring. In 1930, its photographic magnitude was as bright as 9th magnitude. In 1969 it dipped to 11.2 and today it shines at about 12th magnitude. 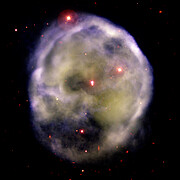