Cometary globules are isolated, relatively small clouds of gas and dust within the Milky Way. This example, called CG4, is about 1,300 light years from Earth. Its head is some 1.5 light-years in diameter, and its tail is about 8 light-years long. The dusty cloud contains enough material to make several Sun-sized stars. CG4 is located in the constellation of Puppis.

The head of the nebula is opaque, but glows because it is illuminated by light from nearby hot stars. Their energy is gradually destroying the dusty head of the globule, sweeping away the tiny particles which scatter the starlight. This particular globule shows a faint red glow from electrically charged hydrogen, and it seems about to devour an edge-on spiral galaxy (ESO 257-19) in the upper left. In reality, this galaxy is more than a hundred million light-years further away, far beyond CG4.

The image from the 4-meter telescope was taken in four filters, three of which are for blue, green and near-infrared light. The fourth is designed to isolate a specific color of red, known as hydrogen-alpha, which is produced by warm hydrogen gas. A variety of image file sizes are posted above.

The NOAO Image Gallery on the Web contains a variety of digital science images, Messier objects, observatory panoramas, telescope photos, portraits of key personnel and historic pictures that trace back to the founding of Kitt Peak National Observatory in 1958 on land leased from the Tohono O’odham Nation. 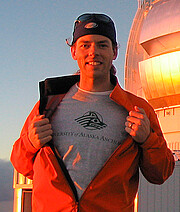