Sinuous stellar jets meander lazily across a field of stars in new images captured from Chile by the international Gemini Observatory, a Program of NSF's NOIRLab. The gently curving stellar jets are the outflow from young stars, and astronomers suspect their sidewinding appearances are caused by the gravitational attraction of companion stars. These crystal-clear observations were made using the Gemini South telescope’s adaptive optics system, which helps astronomers counteract the blurring effects of atmospheric turbulence.

Young stellar jets are a common by-product of star formation and are thought to be caused by the interplay between the magnetic fields of rotating young stars and the disks of gas surrounding them. These interactions eject twin torrents of ionized gas in opposite directions, such as those pictured in two images captured by astronomers using the Gemini South telescope on Cerro Pachón on the edge of the Chilean Andes. Gemini South is one half of the international Gemini Observatory, a Program of NSF's NOIRLab, that comprises twin 8.1-meter optical/infrared telescopes on two of the best observing sites on the planet. Its counterpart, Gemini North, is located near the summit of Maunakea in Hawai‘i.

The jet in the first image, named MHO 2147, is roughly 10,000 light-years from Earth, and lies in the galactic plane of the Milky Way, close to the boundary between the constellations Sagittarius and Ophiuchus. MHO 2147 snakes across a starry backdrop in the image — an appropriately serpentine appearance for an object close to Ophiuchus. Like many of the 88 modern astronomical constellations, Ophiuchus has mythological roots — in ancient Greece it represented a variety of gods and heroes grappling with a serpent. MHO 1502, the jet pictured in the second image, is located in the constellation of Vela, approximately 2000 light-years away.

Most stellar jets are straight but some can be wandering or knotted. The shape of the uneven jets is thought to be related to a characteristic of the object or objects that created them. In the case of the two bipolar jets MHO 2147 and MHO 1502, the stars which created them are obscured from view.

In the case of MHO 2147, this young central star, which has the catchy identifier IRAS 17527-2439, is embedded in an infrared dark cloud — a cold, dense region of gas that is opaque at the infrared wavelengths represented in this image [1]. The sinuous shape of MHO 2147 is caused because the direction of the jet has changed over time, tracing out a gentle curve on either side of the central star. These almost unbroken curves suggest that MHO 2147 has been sculpted by continuous emission from its central source. Astronomers found that the changing direction (precession) of the jet may be due to the gravitational influence of nearby stars acting on the central star. Their observations suggest that IRAS 17527-2439 could belong to a triple star system separated by more than 300 billion kilometers (almost 200 billion miles).

MHO 1502, on the other hand, is embedded in a totally different environment — an area of star formation known as an HII region. The bipolar jet is composed of a chain of knots, suggesting that its source, thought to be two stars, has been intermittently emitting material.

These detailed images were captured by the Gemini South Adaptive Optics Imager (GSAOI), an instrument on the 8.1-meter-diameter Gemini South telescope. Gemini South is perched on the summit of Cerro Pachón, where dry air and negligible cloud cover provide one of the best observing sites on the planet. Even atop Cerro Pachón, however, atmospheric turbulence causes the stars to blur and twinkle.

GSAOI works with GeMs, the Gemini Multi-Conjugate Adaptive Optics System, to cancel out this blurring effect using a technique called adaptive optics. By monitoring the twinkling of natural and artificial guide stars up to 800 times a second, GeMs can determine how atmospheric turbulence is distorting Gemini South’s observations [2]. A computer uses this information to minutely adjust the shape of deformable mirrors, canceling out the distortions caused by turbulence. In this case, the sharp adaptive optics images have made it possible to recognize more details in each knot of the young stellar jets than in previous studies.

[1] Astronomical objects can appear very different at different wavelengths. For example, the dust surrounding newborn stars blocks visible light but is transparent at infrared wavelengths. Something similar also happens here on Earth — doctors can see right through you with an X-ray machine even though human bodies are not transparent at visible wavelengths. Astronomers therefore study the Universe across the electromagnetic spectrum to learn as much as possible about the Universe.

[2] Adaptive optics systems on telescopes often make use of "natural guide stars" which are bright stars that lie close to the target of an astronomical observation. Their brightness makes it easy to measure how atmospheric turbulence is distorting their appearance. Gemini South also uses artificial guide stars produced by shining powerful lasers into the upper atmosphere.

The observations in this image were published in the paper High-resolution images of two wiggling stellar jets, MHO 1502 and MHO 2147, obtained with GSAOI+GeMS, to appear in the journal Astronomy and Astrophysics. 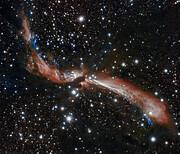 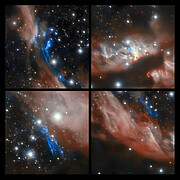 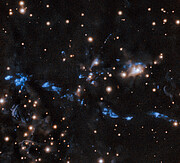 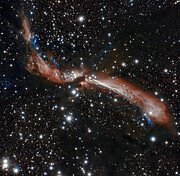