Case Western Reserve University astronomers have announced the discovery of a new galaxy, termed Andromeda VIII. The new galaxy is so widespread and transparent that astronomers did not suspect its existence until they mapped the velocity of stars thought to belong to the well-known and nearby large Andromeda spiral galaxy and found them to move independently of Andromeda.

Heather Morrison, Paul Harding and Denise Hurley-Keller of Case’s department of astronomy and George Jacoby of the WIYN Observatory, will report their discovery in an upcoming article in Astrophysical Journal Letters.

“This is particularly exciting because it allows us to watch the ongoing growth of the nearby Andromeda galaxy from smaller galaxies,” says Morrison.

The astronomers used Case’s Burrell Schmidt telescope and the 3.5m WIYN telescope to identify the galaxy. Both telescopes are located at Kitt Peak National Observatory near Tucson, Ariz. NOAO is operated by the Association of Universities for Research in Astronomy (AURA) Inc., under a cooperative agreement with the National Science Foundation.

The newly found galaxy is being torn apart into streams of stars, which leaves a trail of stars that are strung out along the new galaxy’s orbit around the Andromeda galaxy in the way a jet’s contrail shows its route. Andromeda is the nearest large spiral galaxy to our own Milky Way galaxy two million light years away. It is visible as a hazy glowing object to the naked eye in a dark sky in the northern hemisphere and is found in the constellation of Andromeda.

Discovered over 1,000 years ago by the Persian astronomer Azophi Al-Sufi, Andromeda is a member of the Local Group of approximately 30 galaxies in the Milky Way’s celestial backyard.

In early August, Morrison finished analyzing the data of these stars from the Andromeda celestial neighborhood. “I was amazed to find a new dwarf galaxy orbiting Andromeda. It is a ’see-thru’ galaxy, which was only discovered once we obtained velocity measurements for some of its stars,” said Morrison.

She adds that the reason Andromeda VIII escaped detection was the fact that it is located in front of the bright regions of Andromeda’s galaxy disk.

Andromeda VIII’s total brightness is comparable to that of Andromeda’s well-known companion M32, a small nearby galaxy, but Andromeda VIII is spread over an area of the sky as much as ten times or more larger than M32. Its elongated shape is caused by Andromeda’s gravitational pull, which has stretched it out due to the stronger gravity on the side nearest Andromeda.

Morrison and her collaborators also suggested that a very faint stream of stars, detected near the large Andromeda galaxy in 2001 by the Italian Astronmer R. A. Ibata and colleagues, was pulled off Andromeda VIII in an earlier passage around the parent galaxy. “Future research in this area should provide rich and fruitful results,” stated Morrison.

Theory has predicted for decades that galaxies are assembled in a "bottom-up” process, forming first as small galaxies that later merge to form large ones.

“Since 1994, when Ibata and colleagues announced the discovery of a new satellite in the process of being swallowed by the Milky Way, we have been able to see the process taking place in our own galaxy,” stated Morrison. “Now we find the same process in our nearest large neighbor.”

She adds that now it looks like Andromeda is even more inundated by small galaxies than the Milky Way. Ibata and colleagues have taken deep images of Andromeda which show a rich collection of star streams wreathed about the galaxy. Morrison and her colleagues have now identified the source of one of these star streams. They plan future observations to connect the different star streams with their progenitors, and thus learn more about the properties of the companion galaxy, the Andromeda galaxy and its elusive dark matter halo, the unseen matter that is suspected to be present in the universe.

About Case Western Reserve University: Founded in 1826 and shaped by the unique merger of an institute of technology and a liberal arts college. Case is distinguished by its strengths in education, research and service. Located in Cleveland and offering top programs in the Arts and Sciences, Dentistry, Engineering, Law, Management, Medicine, Nursing and Social Sciences, Case is among the world’s leading research institutions. www.case.edu. 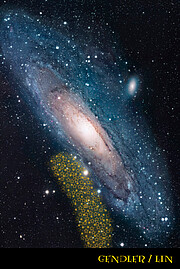