This image of the clouds of gas and dust next to the “neck” and “body” of the Pelican Nebula was taken by the National Science Foundation’s Mayall 4-meter telescope at Kitt Peak National Observatory near Tucson, AZ.

Narrow-band filters were used to isolate the red emission lines of hydrogen and singly-ionized sulfur. The image reveals many previously unseen shockwaves, evidence for powerful outflows from newly formed stars embedded within the molecular clouds that rim the nebula.

Intense radiation from several massive stars located just off the image is eroding the surrounding molecular cloud. In regions shadowed by dense clumps of gas and dust, parts of the cold molecular cloud survive to produce the long “pillars” of dusty material. A faint jet (known as Herbig-Haro object 555) squirts out of the tip of one of the pillars, indicating the presence of an unseen protostar.

Star formation continues in the dusty and opaque interior of the cloud. An embedded infrared source in the main cloud drives a supersonic outflow into the nebula towards the south.

As this chain emerges into the lower density surroundings, it is deflected towards the west, indicating that there is an outflow of plasma from the core of the HII region. This image reveals about a dozen shocks powered by young stars embedded in the clouds adjacent to the nebula.

North is up and west is to the right in this image.

The Pelican-North American nebula complex (“W80”) is located a few degrees east of the bright star Deneb in the constellation Cygnus the Swan, about 1,800 light-years distant from Earth.

The large “donut” in the middle is an artifact of the coma corrector in the KPNO 4m that was not completely removed in the reduction.

For more information on the survey, see: http://casa.colorado.edu/~bally/ 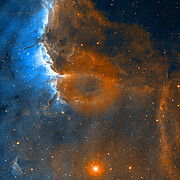