Starburst Eye of a Galaxy Produces a Cosmic Shower

Combining images from orbiting and ground-based telescopes, an international team of astronomers has located the eye of a cosmic hurricane: the source of the 1 million mile-per-hour winds that shower intergalactic space from the galaxy M82.

Situated 10 million light years from our own galaxy, the Milky Way, M82 is one of the most studied objects in the sky. Known as a starburst galaxy for the intense, bright clusters of young stars at its heart, M82 is also characterized by massive jets of hot gas — tens of thousands of light years long — that blast into intergalactic space perpendicular to the starry plane of the galaxy.

Using images combined from the Hubble Space Telescope (HST) and the WIYN Telescope on Kitt Peak, Ariz., a team of astronomers from University College London and the University of Wisconsin-Madison has traced the origin of the galaxy’s “superwind” into the starburst heart of M82. The work shows that the wind is not a single entity, but is made up of multiple gas streams that expand at different rates to form a “cosmic shower” of hot gas expelled from the starburst.

The galaxy’s mighty winds, the astronomers say, were sparked by a near-miss collision with the neighboring giant spiral galaxy M81. That close encounter, according to University College London astronomer Linda Smith, set off an explosive burst of star formation.

“M82 shows intense star formation packed into dense clusters,” says Smith. “This powers plumes of hot gas that extend for tens of thousands of light years above and below the disk of the galaxy. The jets of gas from this pulsating cosmic shower are traveling at more than a million miles an hour into intergalactic space.”

The emphasis of the new work, according to UW-Madison astronomer Jay Gallagher, was on the powerful high-temperature winds of M82 and using the Hubble and WIYN observations in combination to view the galaxy in a new way. “The Hubble and the WIYN data give us a new overall view of the M82 superwind stretching from deep within the starburst into intergalactic space.”

The challenge of the new observations lay in visualizing data covering enormous distances and a huge range in brightness, says Mark Westmoquette, a graduate student at University College London.

“We solved this by overlaying the sharp images from Hubble that cover the inner galaxy, where resolving key details is critical, on top of WIYN data that show the extended wind,” Westmoquette explains. “This approach allowed us to connect inner and outer features with specific sites of star formation.”

Westmoquette likened the exercise to tracing widely dispersed plumes of industrial smoke back to the smokestack from which it originated.

“Just as in the terrestrial case, understanding the flow of chemically enriched matter from galaxies into diffuse intergalactic space requires maps extending from the source to where the plume is lost,” Westmoquette says. “It is a challenge for astronomers.”

In addition to the Hubble Space Telescope, data for the group’s observations were obtained from the 3.5-meter WIYN Telescope at the Kitt Peak National Observatory in Arizona. The observatory is supported by the National Science Foundation and a consortium of American universities, including UW-Madison. 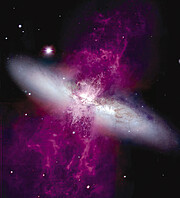