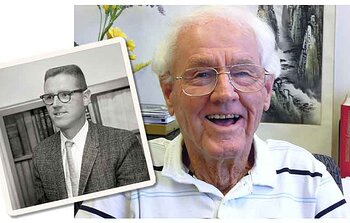 noaoann15005 — Announcement
NOAO Astronomer Helmut Abt turns 90
26 May 2015: The recipient in 1952 of the first doctoral degree in astrophysics awarded by Caltech for his work on the nature of W Virginis stars, Abt has studied many topics involving stellar spectroscopy. His work established the basic properties of B-G main sequence stars and guided subsequent developments in theories of binary star formation and the dynamics of stellar atmospheres. In the 1950’s Abt helped to select the site for a national astronomical observatory by conducting an aerial site survey and exploring potential sites by Jeep, pack horse, and on foot. From 1971-1999, Abt served as Managing Editor for the Astrophysical Journal. From 1980 onward, his interest in publication practices in astronomy led to a series of papers on topics such as the relative value of smaller aperture telescopes, the productivity of astronomers as a function of age, and the half-life of astronomical publications. Read more about Abt's scientific discoveries
Read more 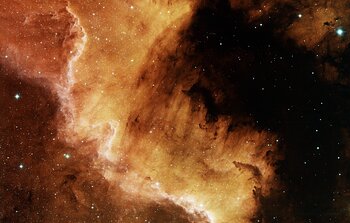 noaoann15004 — Announcement
The North America Nebula
15 April 2015: NGC 7000 is a giant nebula in the constellation of Cygnus. Also known as the North America Nebula, this image shows only the southern tip, or the “Mexico”, part of the nebula. Emission nebula, like this one, are energized by the light from stars embedded within. The image was generated by combining data from observations in Hydrogen alpha (red), Oxygen [OIII] (green) and Sulfur [SII] (blue) filters. In this image, North is up, East is to the left.
Read more 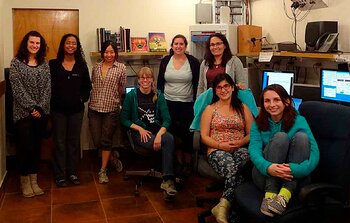 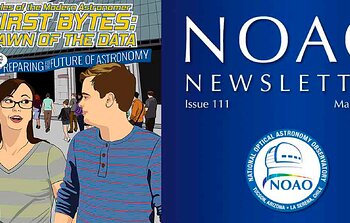 noaoann15002 — Announcement
March 2015 NOAO Newsletter
26 February 2015: The March 2015 NOAO Newsletter is online and ready to download. On the Cover NOAO unveiled the first chapter of its graphic novel, “Tales of the Modern Astronomer: ANTARES Rising,” at the January 2014 American Astronomical Association (AAS) meeting to highlight the ANTARES project. The cover image for this Newsletter issue is the first panel of the graphic novel’s second chapter,“First Bytes: Dawn of the Data.” The story line for this new chapter was presented as the backdrop of the NOAO booth at the January 2015 AAS meeting. Read more starting on page 24 of this month's Newsletter.
Read more 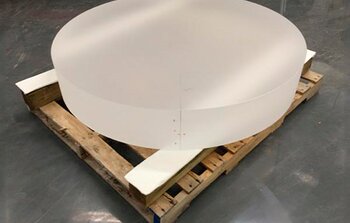 noaoann15001 — Announcement
DESI Project Delivers Major Optical Elements
26 January 2015: The Dark Energy Spectroscopic Instrument (DESI) project has delivered major optical elements to Arizona Optical Science and L3-Brashear for figuring and polishing. Above is an image of the largest corrector lens, C1 measuring 1.15m in diameter. The homogeneity of the fused silica glass came in at an astounding 1ppm (exceeding the 3ppm spec). DESI will be conducted on the Mayall 4-meter telescope at Kitt Peak National Observatory starting in 2018.
Read more 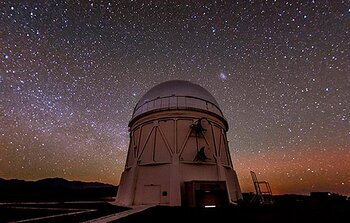 noaoann14008 — Announcement
NOAO Staff on team receiving the 2015 Breakthrough Prize in Fundamental Physics
13 November 2014: The prize, for the unexpected discovery that the expansion of the universe is accelerating, rather than slowing as had been long assumed, is a shared honor with Saul Perlmutter, Brian Schmidt, and Adam Riess leading a collaboration of 51 total prize recipients splitting $3 million. Significant work on this project was done at the CTIO Blanco 4-meter telescope by current NOAO staff members Chris Smith and Tom Matheson, and former NOAO employees Bob Schommer, Nick Suntzeff, Mark Phillips, and Alejandro Clochiatti along with various other current and former AURA employees.
Read more 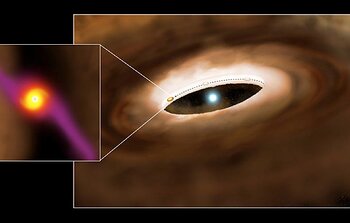 noaoann14007 — Announcement
HD100546 and Circumstellar Disk with Extrasolar Planet
9 September 2014: In a recently published paper, NOAO astronomer Joan Najita was part of a team that has shown evidence for a planet forming in the disk around a young star. The results provide perhaps the first evidence that planets are surrounded by a circumplanetary disk at birth. This figure is an artist’s conception of the young massive star HD100546 and its surrounding disk. A planet forming in the disk has cleared the disk within 13AU of the star, a distance comparable to that of Saturn from the sun. As gas and dust flows from the circumstellar disk to the planet, this material surrounds the planet as a circumplanetary disk (inset). These rotating disks are believed to be the birthplaces of planetary moons, such as the Galilean moons that orbit Jupiter. While they are theoretically predicted to surround giant planets at birth, there has been little observational evidence to date for circumplanetary ...
Read more 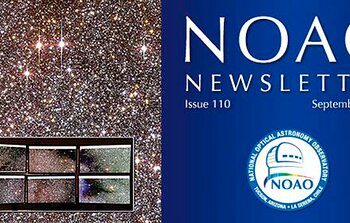 noaoann14006 — Announcement
September 2014 NOAO Newsletter
29 August 2014: The September 2014 NOAO Newsletter is online and ready to download. This issue includes information pertaining to the 2015A Call for Proposals, which are due September 25, 2014. On the Cover The cover shows an 8 × 9 arcminutes image of a portion of the Milky Way galactic bulge, obtained as part of the Blanco DECam Bulge Survey (BDBS) using the Dark Energy Camera (DECam) on the CTIO Blanco 4-m telescope. In this image, red, green, and blue (RGB) pixels correspond to DECam’s Y, z and i filters, respectively. The inset image shows the 2 × 3 array of monitors at the “observer2” workstation in the Blanco control room. The six chips shown here represent only 10% of the camera’s field of view.
Read more 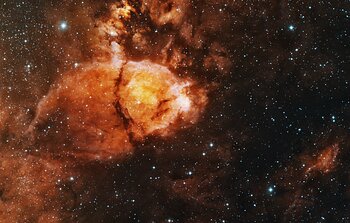 noaoann14005 — Announcement
The Sky as Imaged by Travis Rector
6 May 2014: This new image of NGC 896, a region of energetic star formation in a cloud of gas and dust, represents one of the many beautiful images that Dr. Travis Rector has produced using NOAO telescope data over the years. Rector has now released a total of 150 images; more than 100 of these can be found in the NOAO image gallery. If all of Rector’s images were combined into a single image, it would contain more than five billion pixels – or 5 Gigapixels. Remarkably, this still covers only about 0.1% of the entire sky!
Read more 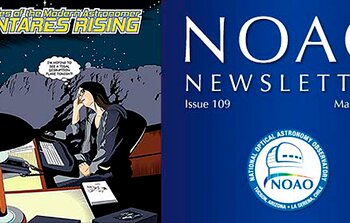 noaoann14004 — Announcement
March 2014 NOAO Newsletter
26 February 2014: The March 2014 NOAO Newsletter is online and ready to download. This issue includes information pertaining to the 2014B Call for Proposals, which are due March 31, 2014. On the Cover NOAO is embarking on a path to better serve the community in the use and analysis of big data. The cover image is the beginning panel of "Tales of the Modern Astronomer: ANTARES Rising," which tells the story of one young researcher in the near future benefiting from such development to exploit "open access to data and real-time astronomy tools" in the Large Synoptic Survey Telescope (LSST) Era (read the full story about ANTARES in the Science Highlights section of this Newsletter). Development is starting now to establish this expertise at NOAO on behalf of the community.
Read more 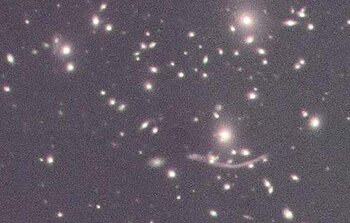 noaoann14003 — Announcement
SAM images gravitational arcs in the Abel 370 cluster of galaxies
14 February 2014: Nearly every "star" in this image is actually a galaxy. The SOAR Adaptive Module (SAM), built by CTIO/NOAO-S, is mounted on the SOAR 4.1 meter telescope: it creates an artificial laser guide star which enables the exquisite resolution seen here. The dark shadow on the left ( as seen in the full image) is produced by the SAM guide probe. Data were taken in September 2013 for the SAM science verification proposal by D. Caminha et al.
Read more 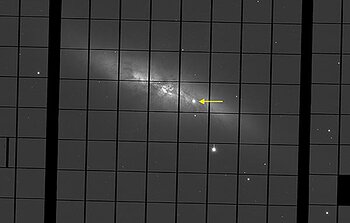 noaoann14002 — Announcement
Supernova in M82
6 February 2014: The recent supernova explosion (named SN2014J) in the galaxy M82 is particularly exciting because this galaxy is relatively close ("only" about 12 million light years distant). This enables astronomers to independently measure the distance of this type Ia supernova, and thus calibrate the distance to other type Ia supernovae. The image shows SN2014J (arrow) in M82 as it was observed by the WIYN 3.5m telescope on January 28, a few days before reaching maximum brightness. The observation used WIYN’s newest camera, the One Degree Imager. The WIYN aperture and spatial resolution will be essential as the team follows the fading supernova during the months ahead.
Read more 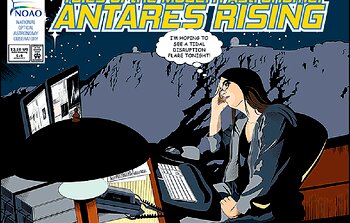 noaoann14001 — Announcement
ANTARES RISING
7 January 2014: Visit the NOAO Booth (space 520) at the AAS Meeting this week to see Tales of the Modern Astronomer: ANTARES RISING on the booth's backdrop, or, if you can't make it to the meeting.
Read more 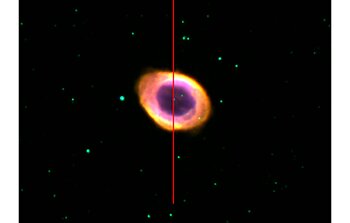 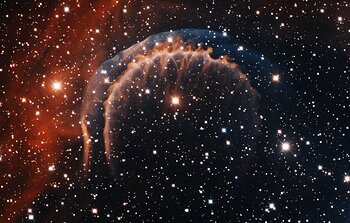 noaoann13006 — Announcement
Planetary Nebula HDW 3
7 November 2013: This image of Hartl-Dengel-Weinberger 3 (HDW 3) was obtained with the wide-field view of the Mosaic camera on the Mayall 4-meter telescope at Kitt Peak National Observatory. The distinctive braided shape of this large, ancient planetary nebula is the result of the planetary nebula colliding with the interstellar gas around it as the nebula moves through the galaxy.
Read more 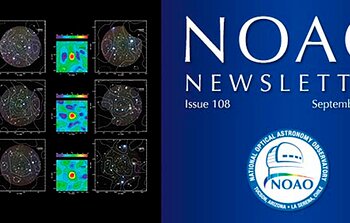 noaoann13005 — Announcement
September 2013 NOAO Newsletter
29 August 2013: The September 2013 NOAO Newsletter is online and ready to download. This issue includes information pertaining to the 2014A Call for Proposals, which are due September 26, 2013. On the Cover The cover image highlights an NOAO large survey program of galaxy clusters, using GMOS on Gemini-South. These clusters were initially identified by the South Pole Telescope (SPT): this spectroscopic survey will measure the growth of the largest structures in the Universe over time. The SPT surveys the cosmic microwave background for potential galaxy clusters, after which the GMOS survey determines velocity dispersion and mass of the clusters. This image shows six typical clusters: SPT significance maps on the left and color images from Magellan-II on the right (Bayliss et al, p.3)
Read more 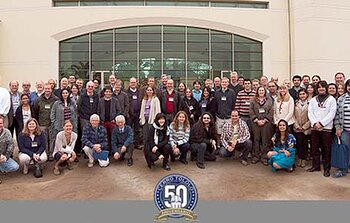 noaoann13004 — Announcement
Fifty Years of Wide Field Studies in the Southern Hemisphere
31 May 2013: The CTIO 50th anniversary conference has ended, and was considered a huge success—scientifically diverse and strong, and the historic talks added personality, emotion and pride to the 50th year celebration. We were pleased to have a strong attendance (3 dozen) from the local Chilean Universities, as well as scientists from Europe, Asia, South America and of course the USA. Pictured above are the conference participants.
Read more 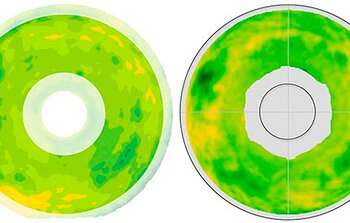 noaoann13003 — Announcement
Blanco f/8 Secondary Repaired
4 April 2013: The repair of the Blanco telescope’s f/8 secondary has been completed, and the figure of the repaired optic (shown at right) matches the measurement after it was refigured in 1993 (at left). The small circle in the center of the 2013 image represents the diameter of the repair. The repaired mirror will be returned to Chile, where the repairs to the mirror cell are underway. Initial re-integration of the cell on the telescope is scheduled for late June, with first light with the repaired mirror planned for August.
Read more

noaoann13002 — Announcement
March 2013 NOAO Newsletter
28 February 2013: The March 2013 NOAO Newsletter is online and ready to download. This issue includes information pertaining to the 2013B Call for Proposals, which are due March 28, 2013. On the Cover This cover presents a collage of the past, present, and future of the Cerro Tololo Inter-American Observatory in Chile in celebration of the observatory’s 50th anniversary.
Read more 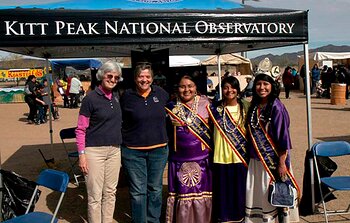