The recent supernova explosion (named SN2014J) in the galaxy M82 is particularly exciting because this galaxy is relatively close ("only" about 12 million light years distant). This enables astronomers to independently measure the distance of this type Ia supernova, and thus calibrate the distance to other type Ia supernovae.

The image shows SN2014J (arrow) in M82 as it was observed by the WIYN 3.5m telescope on January 28, a few days before reaching maximum brightness. The observation used WIYN’s newest camera, the One Degree Imager. The WIYN aperture and spatial resolution will be essential as the team follows the fading supernova during the months ahead. 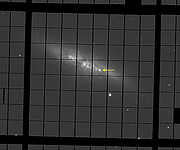