The Sky as Imaged by Travis Rector

This new image of NGC 896, a region of energetic star formation in a cloud of gas and dust, represents one of the many beautiful images that Dr. Travis Rector has produced using NOAO telescope data over the years. Rector has now released a total of 150 images; more than 100 of these can be found in the NOAO image gallery.

If all of Rector’s images were combined into a single image, it would contain more than five billion pixels – or 5 Gigapixels. Remarkably, this still covers only about 0.1% of the entire sky! 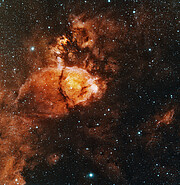