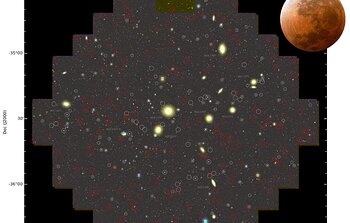 noao1508 — Comunicado científico
NOAO: Oodles of Faint Dwarf Galaxies in Fornax
23 Noviembre 2015: An astonishing number of faint low surface brightness dwarf galaxies recently discovered in the Fornax cluster of galaxies may help to solve the long-standing cosmological mystery of “The Missing Satellites”. The discovery, made by an international team of astronomers led by Roberto Muñoz and Thomas Puzia of Pontificia Universidad Católica de Chile, was carried out using the Dark Energy Camera (DECam) on the 4-m Blanco telescope at Cerro Tololo Inter-American Observatory (CTIO). CTIO is operated by the National Optical Astronomy Observatory (NOAO).
Leer más 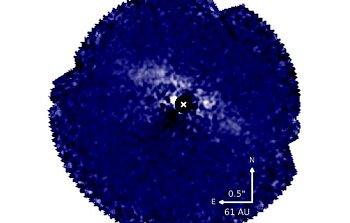 gemini1509 — Organization Release
Gemini Planet Imager Exoplanet Survey
12 Noviembre 2015: The Gemini Planet Imager Exoplanet Survey (GPIES) is an ambitious three-year study dedicated to imaging young Jupiters and debris disks around nearby stars using the GPI instrument installed on the Gemini South telescope in Chile. On November 12, at the 47th annual meeting of the AAS’s Division for Planetary Sciences in Washington DC, Franck Marchis, Chair of the Exoplanet Research Thrust of the SETI Institute and a scientist involved in the project since 2004, will report on the status of the survey, emphasizing some discoveries made in its first year.
Leer más

noao1507 — Organization Release
NOAO: NOAO Images Featured in a New Book for Astronomy Fans and Educators
11 Noviembre 2015: A new book will give readers a behind-the-scenes look at how spectacular images of space are made by the world’s largest and most powerful telescopes. The telescopes and images of National Optical Astronomy Observatory (NOAO) and Gemini Observatory are showcased in this book by long-time observer Dr. Travis Rector.
Leer más 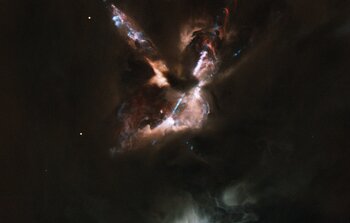 gemini1508 — Foto noticia
Searching for Orphan Stars Amid Starbirth Fireworks
25 Septiembre 2015: A new Gemini Observatory image reveals the remarkable “fireworks” that accompany the birth of stars. The image captures in unprecedented clarity the fascinating structures of a gas jet complex emanating from a stellar nursery at supersonic speeds. The striking new image hints at the dynamic (and messy) process of star birth. Researchers believe they have also found a collection of runaway (orphan) stars that result from all this activity..
Leer más 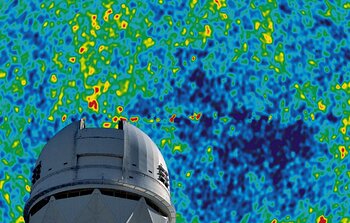 noao1505 — Organization Release
Dark Energy Spectrometer for Kitt Peak Receives Funding Green Light
21 Septiembre 2015: The Dark Energy Spectroscopic Instrument (DESI), destined for the 4-meter Mayall telescope at Kitt Peak National Observatory (KPNO), will chart out the role of dark energy in the expansion history of the universe. The US Department of Energy has announced its approval of Critical Decision 2 (CD-2) for the DESI project, authorizing its scientific scope, schedule, and funding profile. The Mayall telescope is operated by the National Optical Astronomy Observatory (NOAO).
Leer más

gemini1507 — Comunicado científico
Watching an Exoplanet in Motion Around a Distant Star
14 Septiembre 2015: A team of astronomers has given us our best view yet of an exoplanet moving in its orbit around a distant star. A series of images captured between November 2013 to April 2015 shows the exoplanet β Pic b as it moves through 1 ½ years of its 22-year orbital period.
Leer más 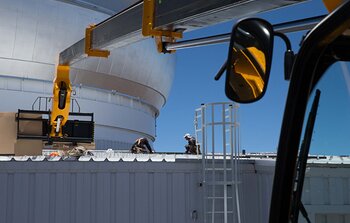 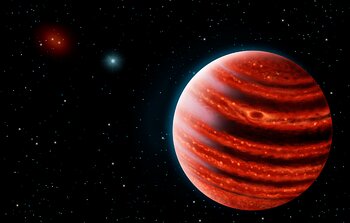 gemini1505 — Comunicado científico
Gemini-Discovered World is Most Like Jupiter
13 Agosto 2015: Going beyond the discovery and imaging of a young Jupiter, astronomers using the Gemini Observatory's new Planet Imager (GPI) have probed a newly discovered world in unprecedented detail. What they found is a planet about two times the mass of Jupiter, and the most Solar System-like planet ever directly imaged around another star.
Leer más

noao1504 — Organization Release
NOAO: Chilean Astronomical Site Becomes World’s First International Dark Sky Sanctuary
9 Agosto 2015: Honolulu, Hawai’i (9 August 2015) – A sanctuary is a place that invites deep contemplation in a safe and stable environment. Few places in the world provide a better opportunity to enjoy and contemplate the starry heavens than Andean mountains of northern Chile. But even in this astronomy mecca lights can intrude to ruin the view, and thoughtful protection is needed as the nearby towns and cities grow in size.
Leer más 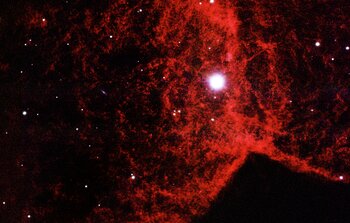 gemini1504 — Foto noticia
NGC 2346: A Cosmic Butterfly’s Delicate Wings
9 Julio 2015: NOAO scientists, using the Gemini Observatory 8-meter telescope in Chile, have obtained the highest resolution image ever obtained for the planetary nebula NGC 2346. Shaped like a butterfly, or an hourglass, but known scientifically as a bipolar planetary nebula, this object is at a distance of 2,300 light-years from our Sun in the constellation Monoceros.
Leer más 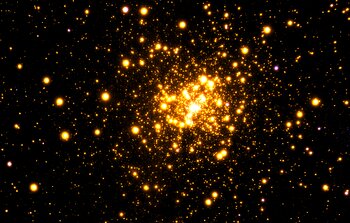 gemini1503 — Foto noticia
Seeing Where Stars Collide
15 Junio 2015: Using the advanced adaptive optics system GeMS, on the Gemini South telescope, astronomers have imaged a beautiful stellar jewel-box – a tightly packed cluster of stars that is one of the few places in our galaxy where astronomers think stars can actually collide.
Leer más 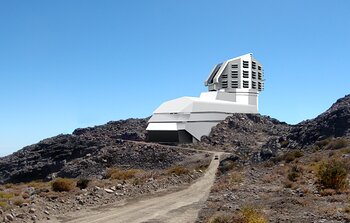 rubin1501 — Comunicado científico
LSST lays first stone
14 Abril 2015: A new ground-based telescope promises unprecedented information about distant galaxies, nearby asteroids and even the mysterious dark energy that is accelerating the expansion of our universe.
Leer más 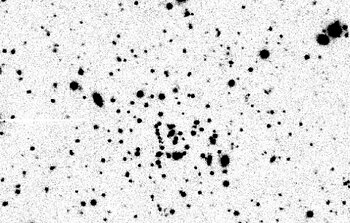 gemini1502 — Comunicado científico
Far From Home
3 Marzo 2015: Like the lost little puppy that wanders too far from home, astronomers have found an unusually small and distant group of stars that seems oddly out of place. The cluster, made of only a handful of stars, is located far away, in the Milky Way’s “suburbs.” It is located where astronomers have never spotted such a small cluster of stars before.
Leer más 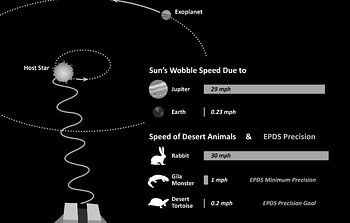 noao1502 — Organization Release
NOAO: NASA Solicits Proposals for a World-class Precision Doppler Spectrometer at Kitt Peak National Observatory
9 Febrero 2015: Kitt Peak National Observatory is the future home of a state-of-the-art instrument that will be used to detect and characterize other worlds. The new instrument, an extreme precision radial velocity spectrometer, will measure the subtle motion of stars produced by their orbiting planets. The spectrometer, funded by NASA, will be deployed on an existing telescope at Kitt Peak, the 3.5-meter WIYN telescope. The National Optical Astronomy Observatory (NOAO), which is funded by NSF, is a partner in the telescope and operates Kitt Peak.
Leer más 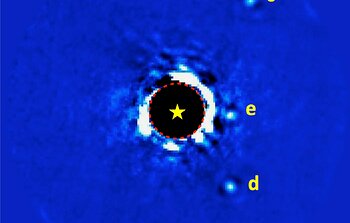 gemini1501 — Comunicado científico
The Gemini Planet Imager Produces Stunning Observations In Its First Year
6 Enero 2015: Stunning exoplanet images and spectra from the first year of science operations with the Gemini Planet Imager (GPI) were featured today in a press conference at the 225th meeting of the American Astronomical Society (AAS) in Seattle, Washington. The Gemini Planet Imager GPI is an advanced instrument designed to observe the environments close to bright stars to detect and study Jupiter-like exoplanets (planets around other stars) and see protostellar material (disk, rings) that might be lurking next to the star.
Leer más 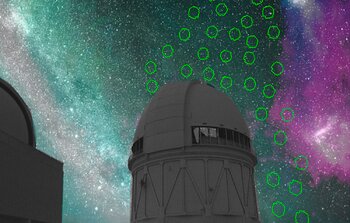 noao1501 — Comunicado científico
NOAO: Smashing Results About Our Nearby Galactic Neighbors
5 Enero 2015: The Magellanic Clouds are the two brightest nearby satellite galaxies to our own Milky Way galaxy. From a new study it appears that not only are they much bigger than astronomers calculated, but also have non-uniform structure at their outer edge, hinting at a rich and complex field of debris left over from their formation and interaction. This is an early result from a survey called SMASH, for “Survey of the MAgellanic Stellar History”, carried out by an international team of astronomers using telescopes that include the Blanco 4-meter at Cerro Tololo Inter-American Observatory (CTIO) in Chile and presented today at the 225th meeting of the American Astronomical Society in Seattle, Washington.
Leer más
Mostrando 1 hasta 18 de 18
Uso de Imágenes y Videos de NOIRLab
¿Es Periodista? Suscríbase al Boletín para Medios de NOIRLab