A new Gemini Observatory image reveals the remarkable “fireworks” that accompany the birth of stars. The image captures in unprecedented clarity the fascinating structures of a gas jet complex emanating from a stellar nursery at supersonic speeds. The striking new image hints at the dynamic (and messy) process of star birth. Researchers believe they have also found a collection of runaway (orphan) stars that result from all this activity..

Gemini Observatory has released one of the most detailed images ever obtained of emerging gas jets streaming from a region of newborn stars. The region, known as the Herbig-Haro 24 (HH 24) Complex, contains no less than six jets streaming from a small cluster of young stars embedded in a molecular cloud in the direction of the constellation of Orion.

"This is the highest concentration of jets known anywhere," says Principal Investigator Bo Reipurth of the University of Hawaii’s Institute for Astronomy (IfA), who adds, "We also think the very dynamic environment causes some of the lowest mass stars in the area to be expelled, and our Gemini data are supporting that idea."

Reipurth along with co-researcher, Colin Aspin, also at the IfA, are using the Gemini North data from the Gemini Multi-Object Spectrograph (GMOS), as well as the Gemini Near-Infrared Imager, to study the region which was discovered in 1963 by George Herbig and Len Kuhi. Located in the Orion B cloud, at a distance of about 400 parsecs, or about 1,300 light-years from our Solar System, this region is rich in young stars and has been extensively studied in all types of light, from radio waves to X-rays.

"The Gemini data are the best ever obtained from the ground of this remarkable jet complex and are showing us striking new detail," says Aspin. Reipurth and Aspin add that they are particularly interested in the fine structure and "excitation distribution" of these jets.

"One jet is highly disturbed, suggesting that the source may be a close binary whose orbit perturbs the jet body," says Reipurth.

The researchers report that the jet complex emanates from what is called a Class~I protostar, SSV63, which high-resolution infrared imaging reveals to have at least five components. More sources are found in this region, but only at longer, submillimeter wavelengths of light, suggesting that there are even younger, and more deeply embedded sources in the region. All of these embedded sources are located within the dense molecular cloud core.

A search for dim optical and infrared young stars has revealed several faint optical stars located well outside the star-forming core. In particular, a halo of five faint Hydrogen-alpha emission stars (which emit large amounts of red light) has been found with GMOS surrounding the HH 24 Complex well outside the dense cloud core. Gemini spectroscopy of the hydrogen alpha emission stars show that they are early or mid-M dwarfs (very low-mass stars), with at least one of which being a borderline brown dwarf.

The presence of these five very low-mass stars well outside the star-forming cloud core is puzzling, because in their present location the gas is far too tenuous for the stars to have formed there. Instead they are likely orphaned protostars ejected shortly after birth from the nearby star-forming core. Such ejections occur when many stars are formed closely together within the same cloud core. The crowded stars start moving around each other in a chaotic dance, ultimately leading to the ejection of the smallest ones.

A consequence of such ejections is that pairs of the remaining stars bind together gravitationally. The dense gas that surrounds the newly formed pairs brakes their motion, so they gradually spiral together to form tight binary systems with highly eccentric orbits. Each time the two components are closest in their orbits they disturb each other, leading to accretion of gas, and an outflow event that we see as supersonic jets. The many knots in the jets thus represent a series of such perturbations. 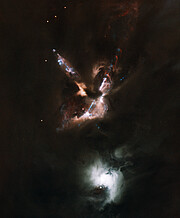