Going beyond the discovery and imaging of a young Jupiter, astronomers using the Gemini Observatory's new Planet Imager (GPI) have probed a newly discovered world in unprecedented detail. What they found is a planet about two times the mass of Jupiter, and the most Solar System-like planet ever directly imaged around another star.

The planet, known as 51 Eridani b, orbits its host star at about 13 times the Earth-Sun distance (equivalent to being between Saturn and Uranus in our Solar System). The system is located about 100 light years away. The Gemini data also provide scientists with the strongest-ever spectroscopic detection of methane in the atmosphere of a planet outside of our Solar System, adding to its similarities to giant planets in our Solar System.

"Many of the exoplanets astronomers have imaged before have atmospheres that look like very cool stars" said Bruce Macintosh, of Stanford University who led the construction of GPI and now leads the planet-hunting survey. "This one looks like a planet."

The research is published in the August 13, 2015 issue of the journal Science.

"This superb result is a clear demonstration of the remarkable imaging and spectroscopic capabilities of GPI," said Chris Davis, the US National Science Foundation (NSF) Astronomy Division program officer who oversees Gemini Observatory funding. "The exoplanet surveys now possible with Gemini will undoubtedly lead to a far better understanding of the numbers of gas giants orbiting neighboring stars, the characteristics of their atmospheres, and ultimately the way in which giant planets like Jupiter and Saturn are formed."

The discovery is part of the team's broader effort to find and characterize new planets called the GPI Exoplanet Survey (GPIES). The survey expects to explore over 600 stars that could host planetary systems; so far they've looked at almost a hundred stars. "This is exactly the kind of system we envisioned discovering when we designed GPI", says James Graham, professor at UC Berkeley and Project Scientist for GPI.

"GPI is capable of dissecting the light of exoplanets in unprecedented detail so we can now characterize other worlds like never before," says Christian Marois of the National Research Council of Canada (NRC). Marois, one of almost 90 researchers on the team, pioneered many of the observation strategies and data reduction techniques that played a critical role in the detection and analysis of the new planet. The light from the planet is very faint – a million times fainter than the star – but GPI can see it clearly. "The planet is so faint and located so close to its star, that it is also the first directly imaged exoplanet to be fully consistent with Solar System-like planet formation models," adds Marois.

The Gemini observations were also followed up by the W.M. Keck Observatory on Maunakea in Hawaii to verify the discovery.

GPI Instrument Scientist, Fredrik Rantakyro, added, "Since I was a child, I dreamed about planets around other stars and the possible lives that could be out there. As an astronomer, it's common to work with state-of-the-art telescopes but not to make your heart beat faster. This is exactly what happened with this dream-come-true discovery of this brother to Jupiter!"

51 Eridani is young – only 20 million years old – and this is exactly what made the direct detection of the planet possible. When planets coalesce, material falling into the planet releases energy and heats it up. Over the next hundred million years they radiate that energy away, mostly as infrared light, and gradually cool.

In addition to being what is likely the lowest-mass planet ever imaged, its atmosphere is also very cool – 430 degrees C (800 degrees Fahrenheit). It also features the strongest spectroscopic atmospheric methane signal, similar to the heavy methane dominated atmospheres of the gas giant planets in our Solar System.

GPI Exoplanet Survey (GPIES) is currently less than 20% through the 600 targets slated for observations during the 3-year campaign. The targets were selected because of their youth and relatively close proximity to our Solar System (within about 300 light years). The results of this survey will be remarkable, as it is probing a regime of exoplanet mass and separation that have never been properly surveyed before. It is expected to provide the first detailed census and demography of gas giant exoplanets, to find several multi-planet systems, and to perform detailed spectral characterization of many new exoplanets.

GPI was made possible with funding by the US National Science Foundation and Gemini partnership to support the work of an international team from the US and Canada. Lawrence Livermore National Laboratory constructed GPI's adaptive optics system and worked to match it to the Gemini telescope. Engineers with the National Research Council of Canada (NRC) designed and built GPI's optical-mechanical structure, and wrote the top level and mechanical control software. UCLA produced GPI's infrared spectrograph. The American Museum of Natural History developed starlight-blocking masks. JPL was responsible for a precision wavefront sensor. University of Montreal, the Space Telescope Science Institute, and other members of the GPI team produced the data analysis software. 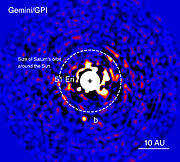