NOAO: Smashing Results About Our Nearby Galactic Neighbors

The Magellanic Clouds are the two brightest nearby satellite galaxies to our own Milky Way galaxy. From a new study it appears that not only are they much bigger than astronomers calculated, but also have non-uniform structure at their outer edge, hinting at a rich and complex field of debris left over from their formation and interaction. This is an early result from a survey called SMASH, for “Survey of the MAgellanic Stellar History”, carried out by an international team of astronomers using telescopes that include the Blanco 4-meter at Cerro Tololo Inter-American Observatory (CTIO) in Chile and presented today at the 225th meeting of the American Astronomical Society in Seattle, Washington.

The Large and Small Magellanic Clouds are dominant features in the Southern hemisphere sky. Although named after explorer Ferdinand Magellan who brought them to the attention of Europeans, they were already known to every early culture in the Southern hemisphere. The Large Cloud (LMC), covering about 5 degrees in angular size (10 lunar diameters), appears to the naked eye like a detached piece of the Milky Way. At a distance from us of about 160 thousand light years, even the brightest stars in these galaxies can’t be seen without a telescope.

As principal investigator Dr. David Nidever (University of Michigan) says, “We have a decent understanding of how large galaxies like the Milky Way form, but most galaxies in the universe are faint, distant, dwarf galaxies. The Magellanic Clouds are two of the few nearby dwarf galaxies, and SMASH is able to map out and study the structures in them like no other survey has been able to do before.”

“We knew from the earlier work of SMASH team members that the LMC was larger than we thought, but those observations probed only 1 percent of the area that we need to explore. SMASH is probing an area 20 times larger, and is confirming beyond doubt that the LMC is really large while also giving us a chance to map its structure in detail.” said Dr. Knut Olsen (National Optical Astronomy Observatory) one of the leaders of the SMASH team. The team has identified stars belonging to the LMC at angular distances up to 20 degrees away, corresponding to 55 thousand light years. This was done using a new camera, dubbed DECam, mounted on the CTIO Blanco 4-meter telescope, which allows the SMASH team to identify faint stars over a much larger area than ever before.

With the Blanco telescope, SMASH can detect exceptionally diffuse stellar structures – up to 400,000 times fainter than the appearance of the faint band of the Milky Way in the night sky. This is possible because DECam can distinguish individual faint Magellanic stars over a huge area. (In astronomical parlance, the survey can reach a surface brightness limit of ~35 magnitudes per square arc second). That allows the team to detect stellar structures that were previously much too faint to see.

The team is also exploring the Magellanic Stream, a gaseous structure that connects the two Clouds and extends in front and behind them. The existence of the Magellanic Stream, first detected with radio telescopes over 30 years ago, clearly indicates that the two galaxies are interacting with each other and with our Milky Way. Astronomers have long expected to also find stars in the Stream but so far none have been detected. It’s likely this is because the stellar component of the Stream is too faint to have been detected until the availability of the new camera. As Dr. Nidever said, “SMASH’s ability to reveal super-faint stellar structures should not only allow us to finally detect the stellar component of the Magellanic Stream but also map out its structure which will give us a much better understanding of the Magellanic Clouds’ interaction history.”

Cerro Tololo Inter-American Observatory is managed by National Optical Astronomy Observatory which is operated by Association of Universities for Research in Astronomy Inc. under a cooperative agreement with the National Science Foundation. 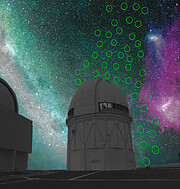 PR Image noao1501a
Smashing Results About Our Nearby Galactic Neighbors

PR Image noao1501b
Smashing Results About Our Nearby Galactic Neighbors

PR Image noao1501c
Smashing Results About Our Nearby Galactic Neighbors