Striking new image of the stately spiral galaxy taken with the Nicholas U. Mayall 4-meter Telescope

This spectacular image highlights the majestic spiral galaxy Messier 106 and its diminutive neighbors, as well as a dense field of background galaxies and foreground stars. This may be the best view yet of Messier 106 in its entirety, showing both the warped central disk and the tenuous outer reaches of the galaxy.

This celestial snapshot captures the majesty of the spiral galaxy Messier 106, also known as NGC 4258. The image is arguably the best yet captured of the entire galaxy [1]. Obtained using the Nicholas U. Mayall 4-meter Telescope at Kitt Peak National Observatory, a Program of NSF’s NOIRLab, this image shows not only the glowing spiral arms, wisps of gas, and dust lanes at the core of the galaxy but also the leisurely twisting bands of stars at its outer edges.

A popular target for amateur astronomers, Messier 106 can be spotted with a small telescope in the constellation Canes Venatici. Messier 106 is similar in size and luminosity to our galactic neighbor the Andromeda Galaxy, but it lies 10 times farther away — more than 20 million light-years from Earth. Though the galaxy measures more than 130,000 light-years from edge to edge, the vast distance between it and the Milky Way renders Messier 106 minuscule when seen from here. Its size in the night sky — if it were visible to the naked eye — is less than that of a penny held at arm’s length!

Despite its tranquil appearance, Messier 106 has an unusually energetic inhabitant. The supermassive black hole at the heart of the galaxy — which is about 40 million times as massive as our Sun — is particularly active. As well as consuming vast amounts of gas and dust, the spinning black hole has warped the surrounding disk of gas, churning up vast amounts of material. This process has created the bright, red streamers of gas emanating from the heart of Messier 106, visible in the center of this image.

Accompanying Messier 106 is a pair of dwarf galaxies belonging to the same galaxy group. The loose collection of stars and dust visible in the bottom-right of this image is the small irregular galaxy NGC 4248. Another small galaxy — UGC 7356 — lies to the lower-left of Messier 106 and is dwarfed by its larger neighbor [2]. Messier 106 and its companions are framed by a variety of objects, from foreground stars to background galaxies. Stars from our own galaxy stud the image, easily identified by the criss-cross diffraction patterns surrounding them. In the background, distant galaxies litter the image, some of them visible through the tenuous disk of Messier 106.

As well as being a striking subject for astronomical images, Messier 106 has been instrumental in measuring the scale of the Universe. Astronomers measure distances in the Universe using an interconnected chain of measurements called the cosmic distance ladder, with each rung of the ladder allowing measurements of more and more distant objects. Calibrating these measurements requires objects with a known brightness — such as pulsating stars known as Cepheid variables [3]. Measurements of the Cepheids in Messier 106 have allowed astronomers to calibrate Cepheids elsewhere in the Universe — helping them to measure the distances to other galaxies [4].

This image was one of the last to be taken with the Mosaic camera before the installation of the Dark Energy Spectroscopic Instrument (DESI), a project of the Department of Energy’s Office of Science and Lawrence Berkeley National Laboratory.

[1] While the Hubble Space Telescope has also released a striking image of Messier 106, Hubble’s image features the center of the galaxy and not its full extent.

[2] The night sky is thronged with stars, galaxies, and other astronomical curiosities. To help keep track of all these objects, galaxies and other astronomical objects often have identifiers consisting of a string of letters and a number. The numbers refer to the catalog the object is listed in, such as the Uppsala General Catalogue of Galaxies (UGC) or the New General Catalogue of Nebulae and Clusters of Stars (NGC), each of which lists thousands of objects. Galaxies are often identified in several catalogs, so they typically have multiple names or designations.

[3] Astronomical objects with a known luminosity are often referred to as “standard candles.” By comparing the intrinsic brightness of such an object with how bright it appears to be, it is possible to measure how far away the standard candle is from Earth.

[4] Astronomers have been able to estimate the distance to M106 with great precision, allowing this galaxy to play an important role in recalibrating the period–luminosity relation for Cepheid variable stars. This relation is used to measure distances not only in our galaxy but also to other nearby galaxies. 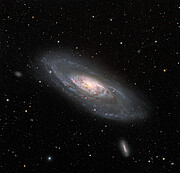